The task of the competition was to design a multifunctional apartment building, which is located on plots bordered by Biskupská, Klášterní and 28.října streets. The whole concept of our solution is based on the fulfillment of the important task of the building, which is to create a city gate to the historic centre.

The mass of the building complements the block of buildings, bridges and works with the collector and integrates it into the modulation of facades. It creates imaginary towers on the corners of the building by working with terraces and loggias, marking the transition to the city centre.

Not only the mass of the building, but also its form and expression complete the location with a unique diversity. The vertical and tectonic façade of the residential floors of the building works with the legacy of the façades of historic apartment buildings in the immediate vicinity. In the same spirit, the horizontal strips of the façade and the two-storey parterre react to modern buildings, which differs from the rest of the building by adding modulation and changing to a horizontal division. This rational expression of the building is supported by the unusual work with materials even today. Instead of stone or other expensive tiles, the building uses plaster techniques that are typical for the creation of historic houses in our territory. The tectonics supporting the horizontal strips are accentuated by a rough cast plaster. The rest of the building uses high-quality smooth plaster. The distinction of the ground floor is accentuated by a dark green patinated paint, which highlights the execution of all details in a bronze shade. The building, with such a simple expression, is complemented by details highlighting its very essence. Untraditionally structured railings, evoking apartment buildings of Milan post-modernism, bronze inscriptions for commercial parterre, artistically rendered ventilation grilles for the collector, cast copies of relief sculptures of iconic Ostrava architecture above the building entrances and textile awnings of the parterre are some of them.

According to the competition, on the first floor there are business premises with their own sanitary facilities, entrances to the communication cores of the building, meeting rooms with mailboxes, storage rooms, cleaning rooms and areas adjacent to the park in the courtyard. On the second floor there are variable office spaces of various sizes with their own sanitary facilities, kitchens and receptions. On the third to fifth floor there are flats with a layout of 1+KK and 2+KK, with the exception of the best situated corner flats 3+KK. On the sixth and seventh floors there are duplex apartments, mostly layout 3+KK with an internal prefabricated spiral staircase, extended by large terraces and in some cases winter gardens. All apartments follow the basic principles of placing hygienic and kitchen cores in the middle of the layout together with the shafts, which allows maximum use of the facades. Parking is provided by a space-saving car lift system and stackers on the second underground floor. Parking on the first underground floor is located only below the courtyard. Under the building, on this floor, there are warehouses for the commercial parterre, utility rooms and cellars for each of the apartments. 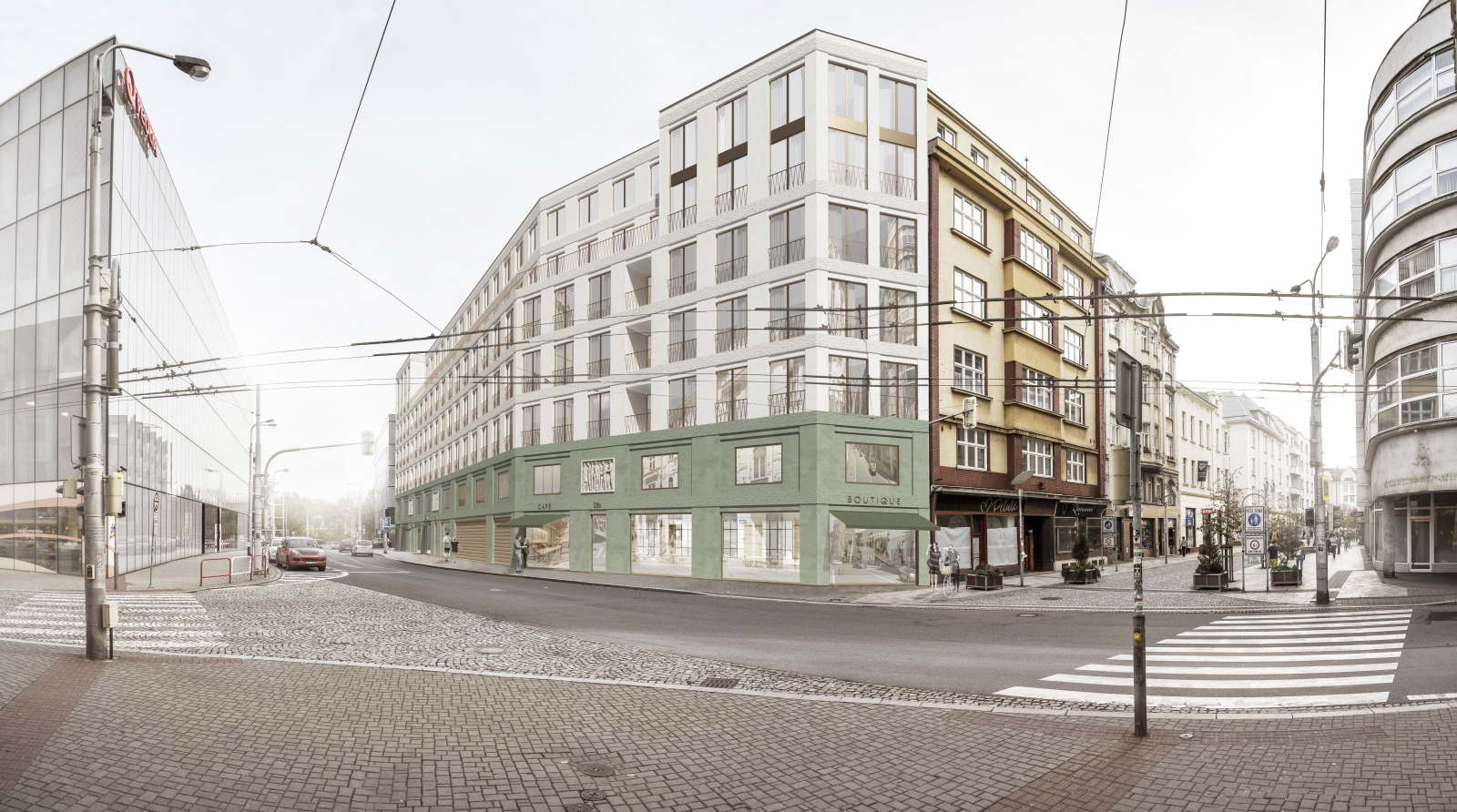 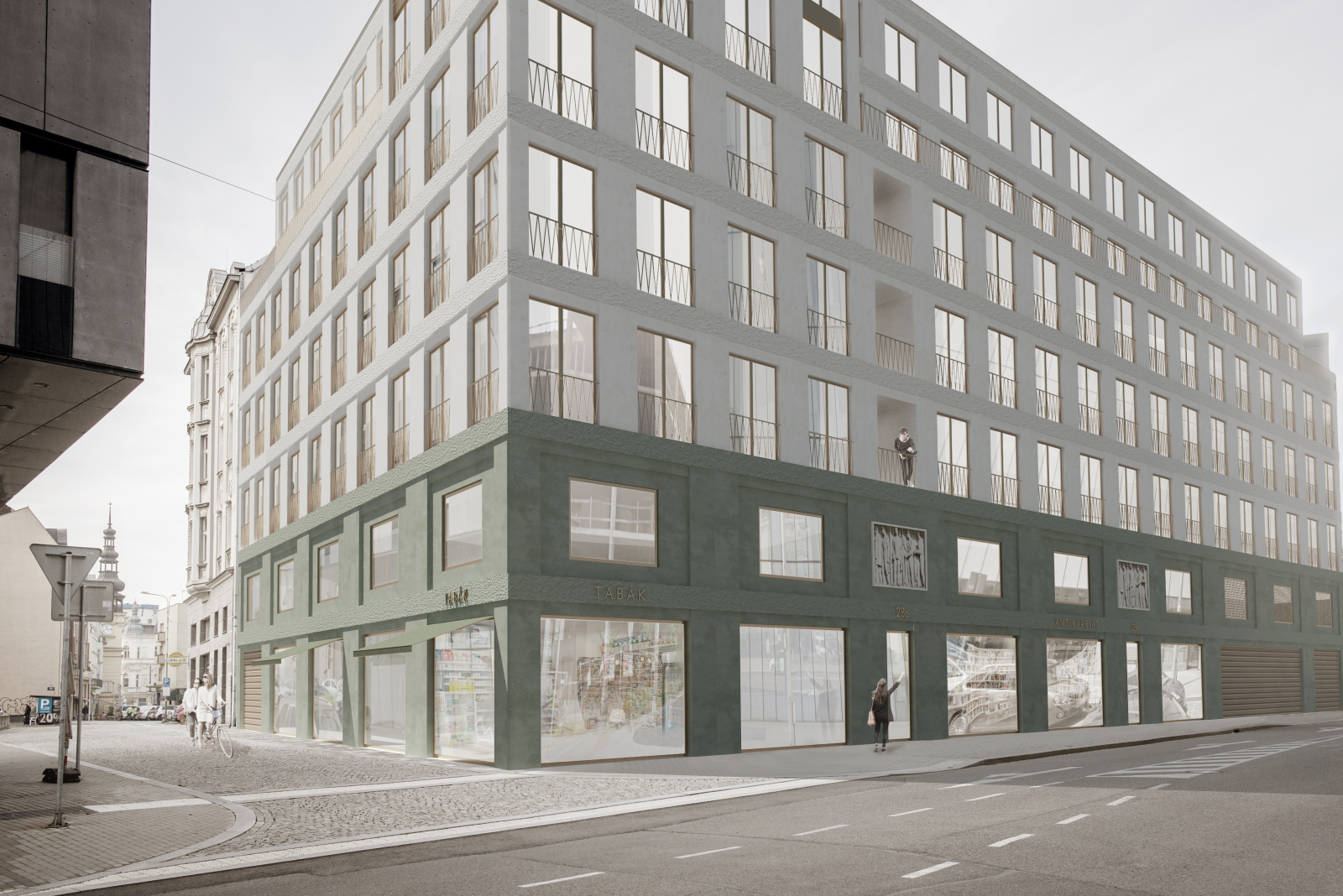 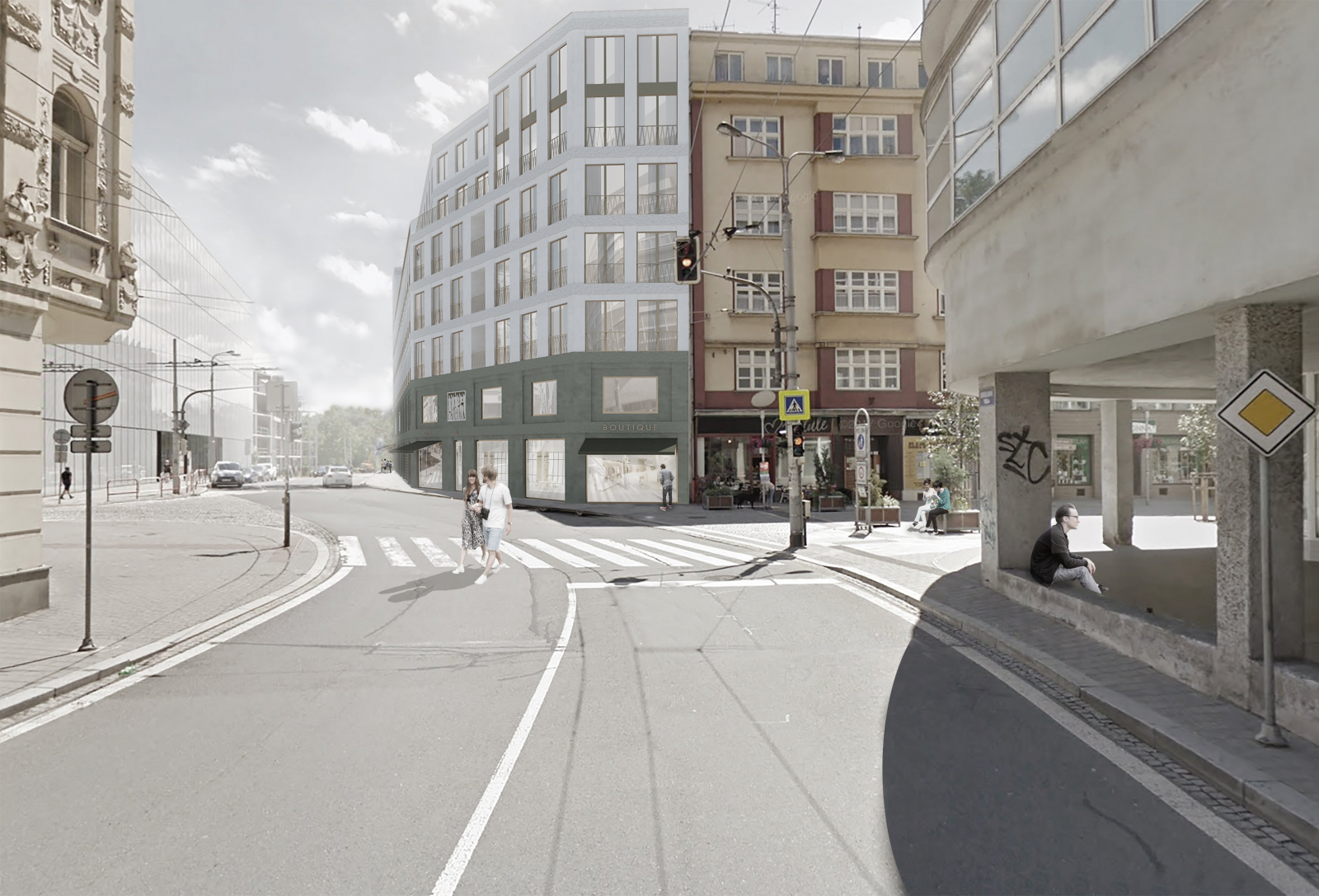 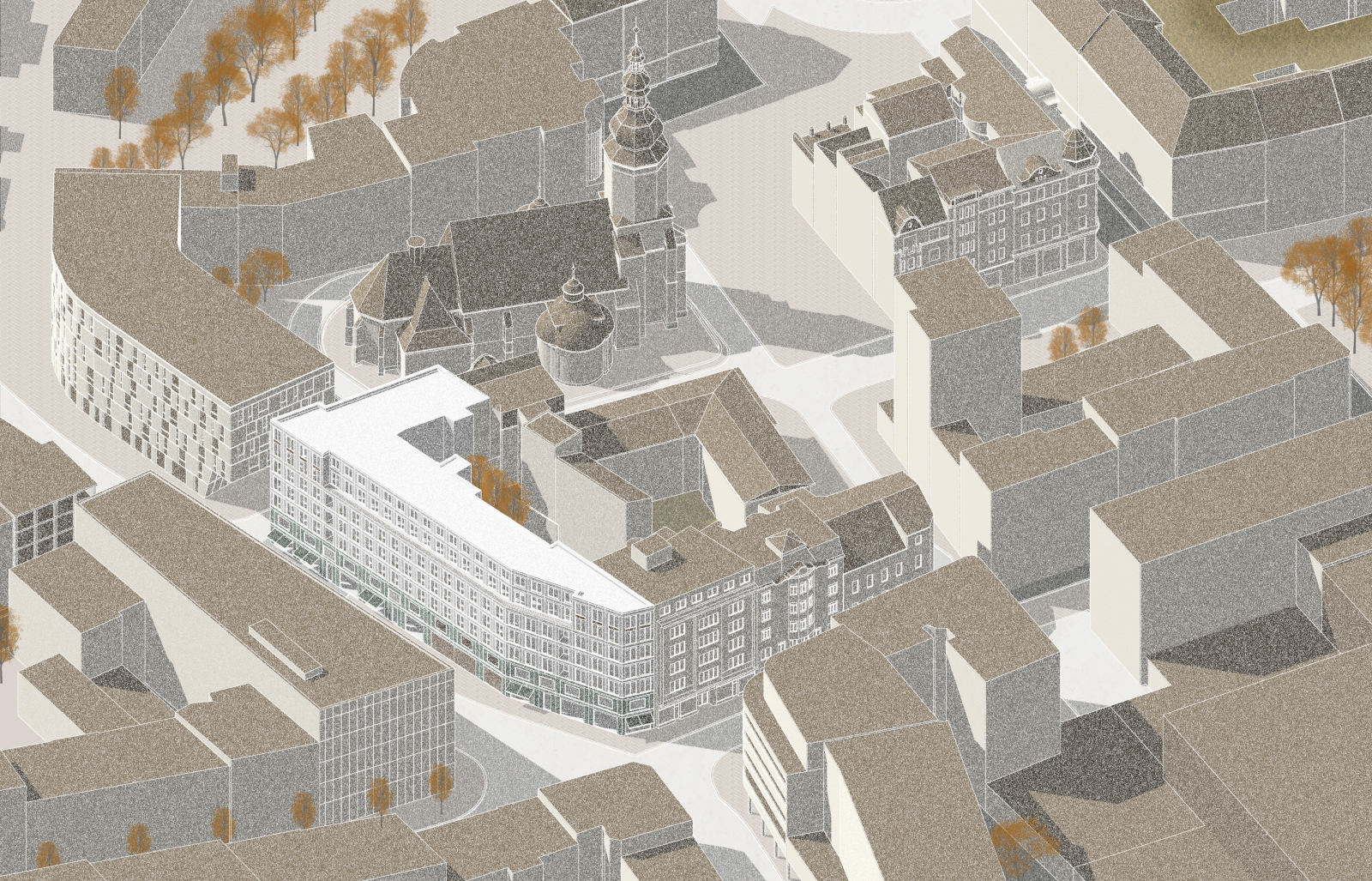 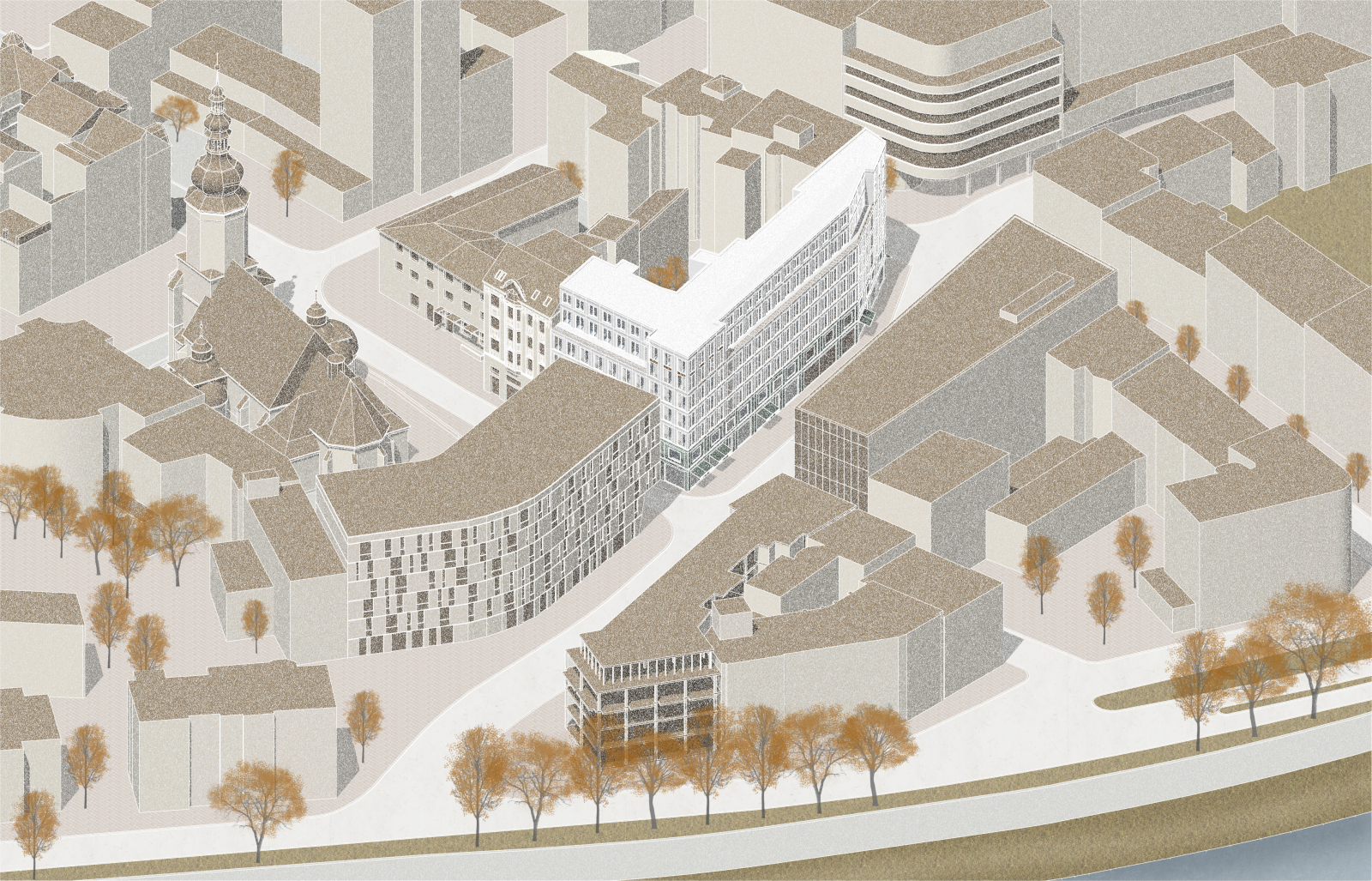 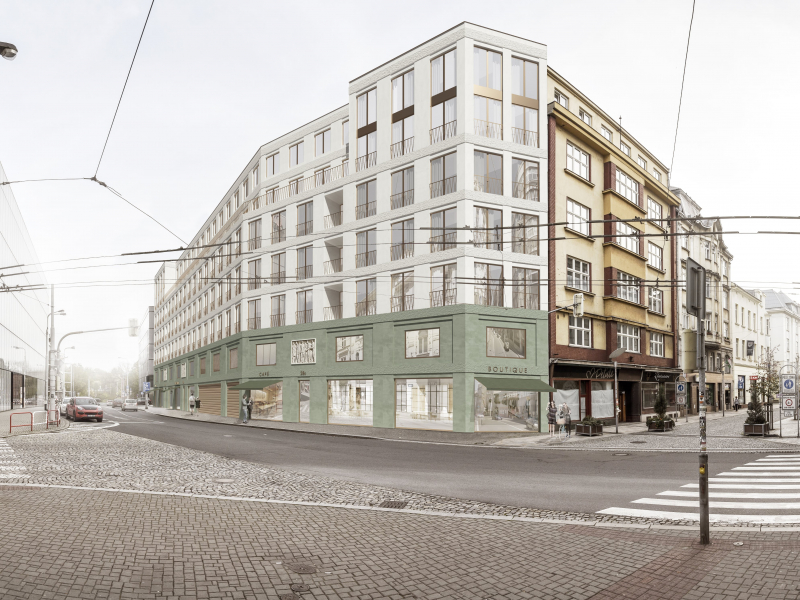 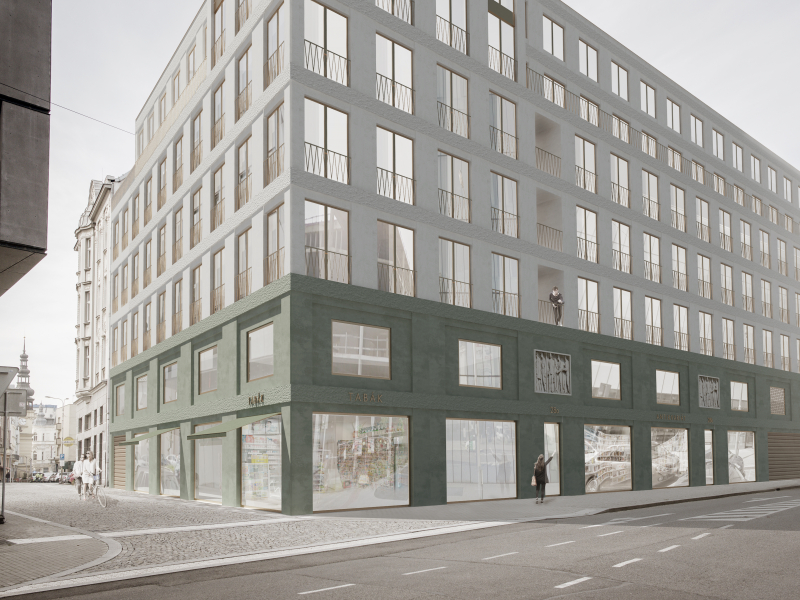 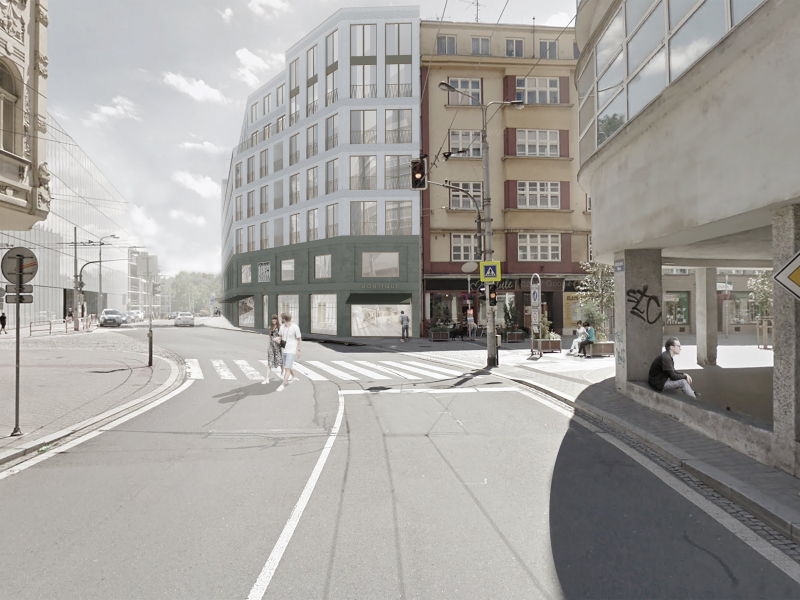 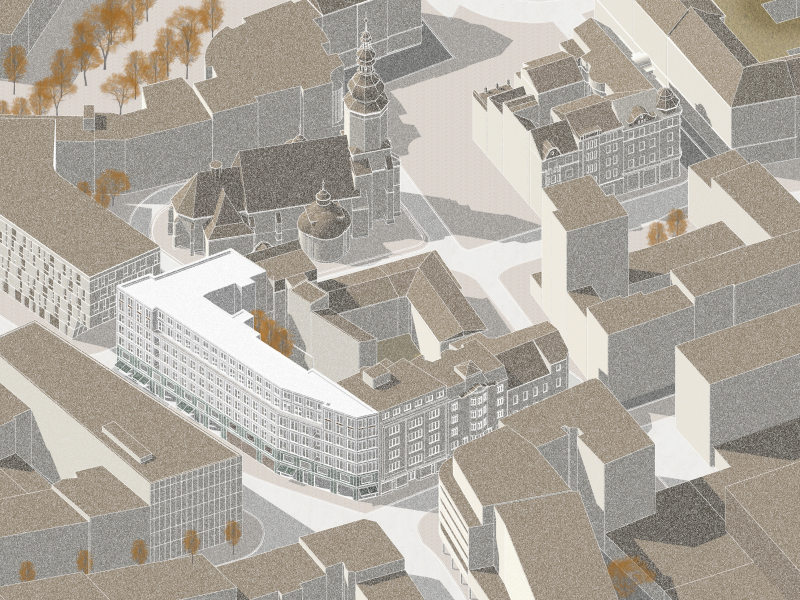 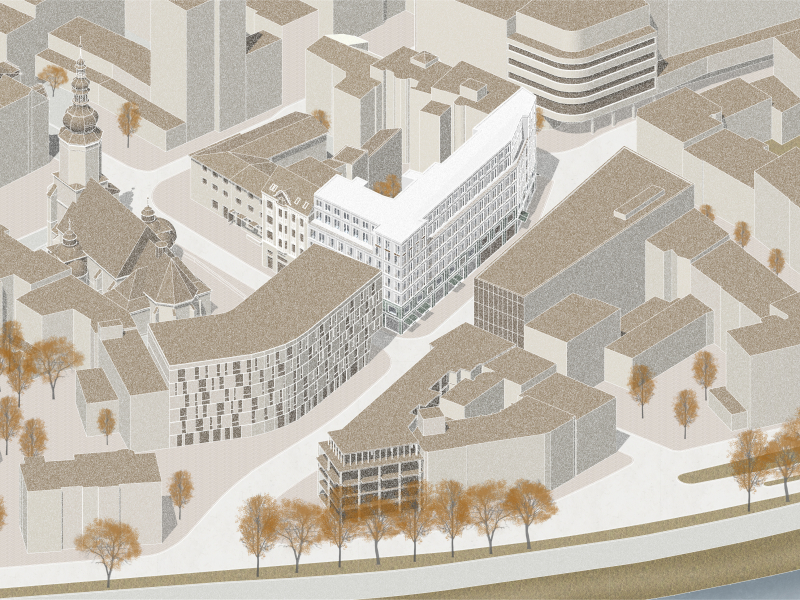 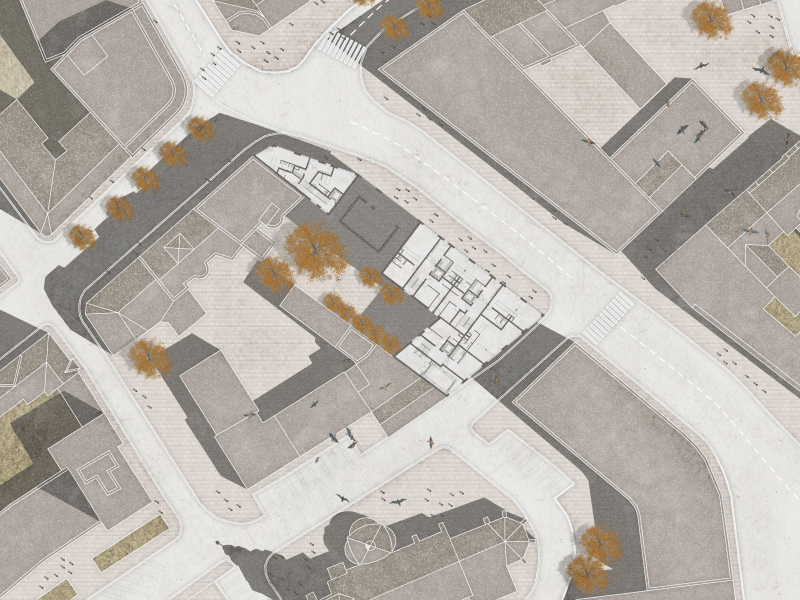