The task of the competition was to prepare the basis for a territorial study of the area of ​​the town centre of Letovice. This area, which is located in the immediate vicinity of Masaryk Square, is bordered on the west by the river Svitava and on the east by Českobratrská Street. Even though the task was to work with only part of the land in this limited area, it was clear that the Brownfield problem in the town centre itself needed to be addressed comprehensively. This urban obstacle has caused the town to grow incorrectly and has set negative trends in the planning of the surrounding area. Therefore, on our initiative, a staged solution was created, which completes the functional cultural centre and lays a stable foundation for the further development of the town.

In the first stage, we deal with the land of the town itself, which is reserved as an area for a new culture house. Despite the fact that the town acquired a large part of the land adjacent to the river Svitava, it was far from being able to obtain all the necessary ones. The lands of buildings that have already acquired a new function as brownfield buildings run into the reserved land from practically all directions. It is mainly a warehouse on the river embankment, which is now home to an organization caring for the town’s youth. On the other hand, there are buildings adjacent to Českobratrská Street. On the north side, directly behind the unused skate park, there is a well-functioning production, which is not planning to relocate its production in the foreseeable future. On the south side, in addition to lands of other production and warehouses, there are mostly lands of the gardens of the town houses of Masaryk Square.

A new cultural centre is to be established in these areas in the near future, with the help of European Union funds. The fundamental condition that we set during the design was the reality and functionality of the design, even in a situation where it is not possible to buy or exchange any other land or buildings. Even though we have already learned, after interviews with the owners of the shops forming the street blockade and the operator of the youth organization, that they are willing to move their shops or premises to the newly established cultural house. The design itself is therefore based on the careful placement of volumes and operations in this complex situation, with an emphasis on the creation of possible spaces that may arise after the demolition of unwanted Brownfield buildings.

On the south side is the disjointed land line of the town houses of Masaryk Square, terminated by the blind facade of the cultural centre. Specifically, it is a single-storey foyer, an elevated space of the main hall and a single-storey multifunctional space. This closes the embankment platform or potential park. This set ends the complex site, which at the moment cannot be uniformly completed by the principle of traditional development and, together with the distance, uses the space as a supply aisle of halls. The common covered platform hides next to this mass a passage on the waterfront and a small courtyard that will serve as a pre-hall space in the following stages. This passage is followed by a small block of mixed cultural functions. In the wing parallel to the hall, there is a new town library and a town gallery space. Due to the fact that there is access to this wing from the large market courtyard, the passage and the small courtyard can be closed and the individual operations can be regulated depending on social events. The waterfront wing of the cultural centre is dedicated to a youth organization, which will find new premises for its activities here. The wing adjacent to the skate park, which is to be transformed into a park-like street in the first stage, is dedicated to the commercial space as well as the courtyard. These can then serve both existing businesses and generate new civic amenities.

In the current situation, in the vicinity of the cultural centre with a common platform, a place is left out for the fulfillment of hygienic conditions and the functioning of all operations. If the precondition for the relocation of functions is met, two new absolutely essential spaces will be created thanks to the shape of the cultural centre. The first is, thanks to the retreat of the cultural centre from Českobratrská Street, the new square as a pre-space of the cultural centre. Thanks to the end of the gables to this street, this acquires a more diluted expression and thus serves better as the facade of the new square, which is supposed to be the quieter counterpart of Masaryk Square. On the waterfront side, thanks to the relocation of the youth organization to the cultural centre, a park is being created, which is to use the waterfront bending environment in the next stages and create a fundamental public space for the town centre residents, ie the new district. A lookout tower is also to be built on this site, which will draw attention to the surrounding area as a monument to the cultural centre. On the north side, a pleasant front-space of the commercial wing with park landscaping is being created by replacing the land of the existing skate park with a street. Due to its height, it does not shield the south facade of the potential block with the south facade, as well as the street space itself. In the currently inhospitable situation, the cultural centre itself creates its public space through courtyards, which are important for social events and daily markets.

The second stage follows the composition of the cultural centre. On the south side, a block of apartment buildings is created in direct connection. It uses the newly created sympathetic spaces by the river and, thanks to the planned regulation of a smaller scale of individual houses, creates housing capacities that have long been lacking in the town centre. It also forms the cornerstone of a potential new neighborhood that could grow on the lowlands of the Svitava River embankment. The block is designed so that the end of its gables creates important landmarks and corners that complete the facades of streets or squares. A commercial parterre is considered in the street adjacent to the cultural centre, the pre-space of which is covered by the corner of the block. On the east side, a solitary apartment building is designed near the main road, which responds to the gables of the cultural centre and completes the imaginary divided block. It closes the newly created square and adds additional gables, which will help to set an adequate scale for the perspective of the square. The solitary block is an ideal adept for parking in the platform or other underground floors, as it is no longer in the area of ​​elevated groundwater. This stage is feasible in a wider time horizon in negotiations with landowners and real estate and is an important stage in separating the disturbed town centre from further development.

The third stage is a reflection on the possibility of developing the core of the town of Letovice along the embankment of the river Svitava. The first two stages could lay a stable foundation for the growth of the town centre. According to our analysis, an effort is desirable to centralize the settlement of an otherwise scattered town, the very centre of which is suffering from the principle of suburbanization and residents are disappearing from it. It is therefore ideal to use the lowlands along the rivers to simulate the natural development of the town, which has been disrupted by industrial zones and most of the housing capacity has been moved to the outskirts of the town. Such a stable core would act as a generator of growth and at this stage, already a predominantly pedestrian centre, would acquire the desired character. In our case, it is a question of stopping the area with a modern block of flats, which denies the shortcomings of the typology thanks to the shape that makes ideal use of the cardinal directions. This is achieved thanks to the non-traditional shape of the blocks, which divide the area in relation to the cardinal directions and urban axes based on the previous stages. The expression of the blocks is also regulated so that the maximum size of the apartment building supports the scale of the new area. Streets are designed between the individual blocks, the width of which equals the regulated height of the blocks. The commercial parterre thus has sufficient pre-space and the streets acquire a lively character. Thanks to this, in cooperation with the bevel, hygienically and socially sound block buildings are achieved. As in the previous stage, the effort to dilute the materials prevails, which, thanks to the united intention of the investors, can become a uniform mass that has little in common with the scale of such a town. Therefore, it is planned to divide the land into smaller parts of differently processed architectural expression, even though the land would fall under the single intention of investors. 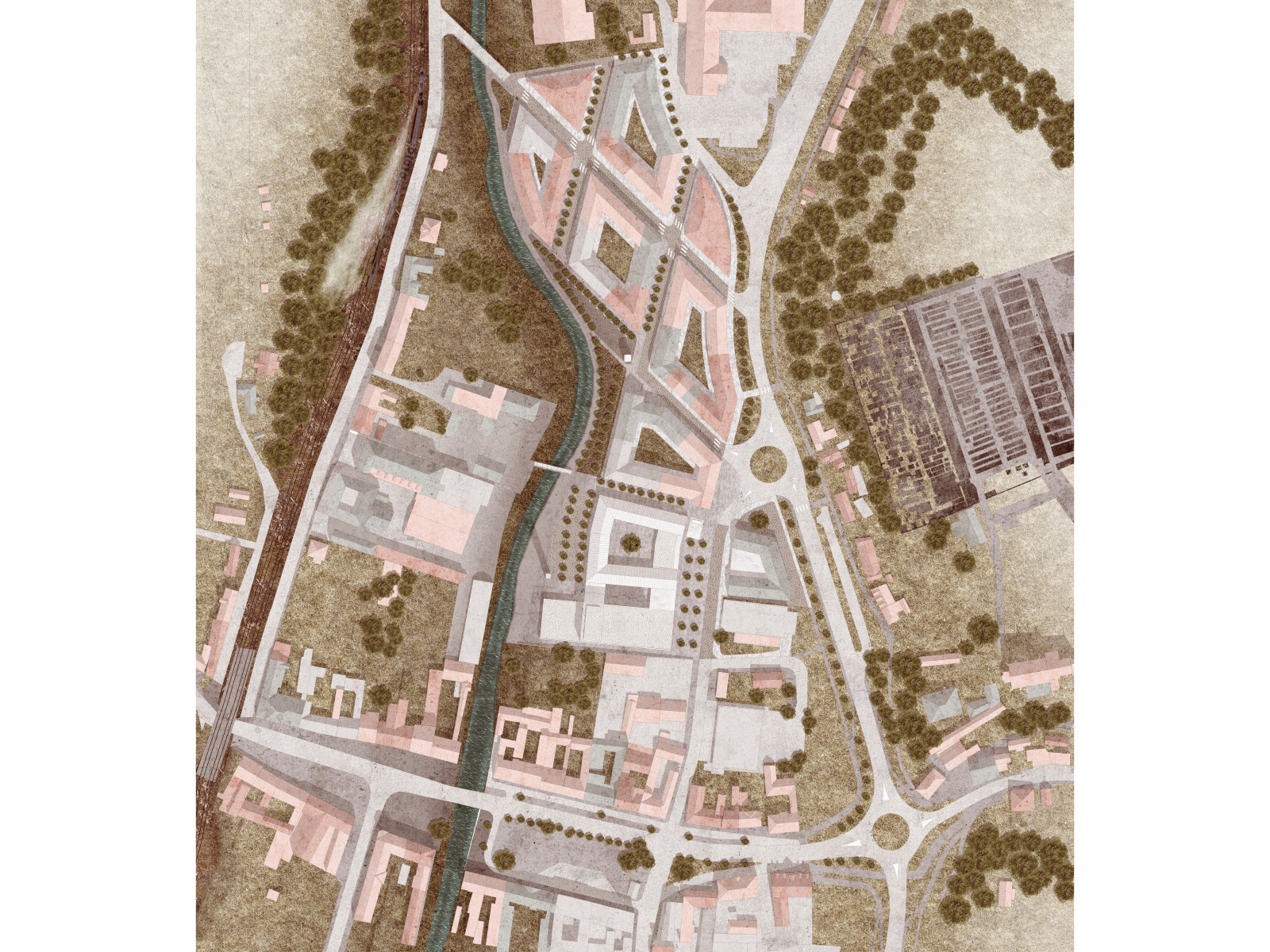 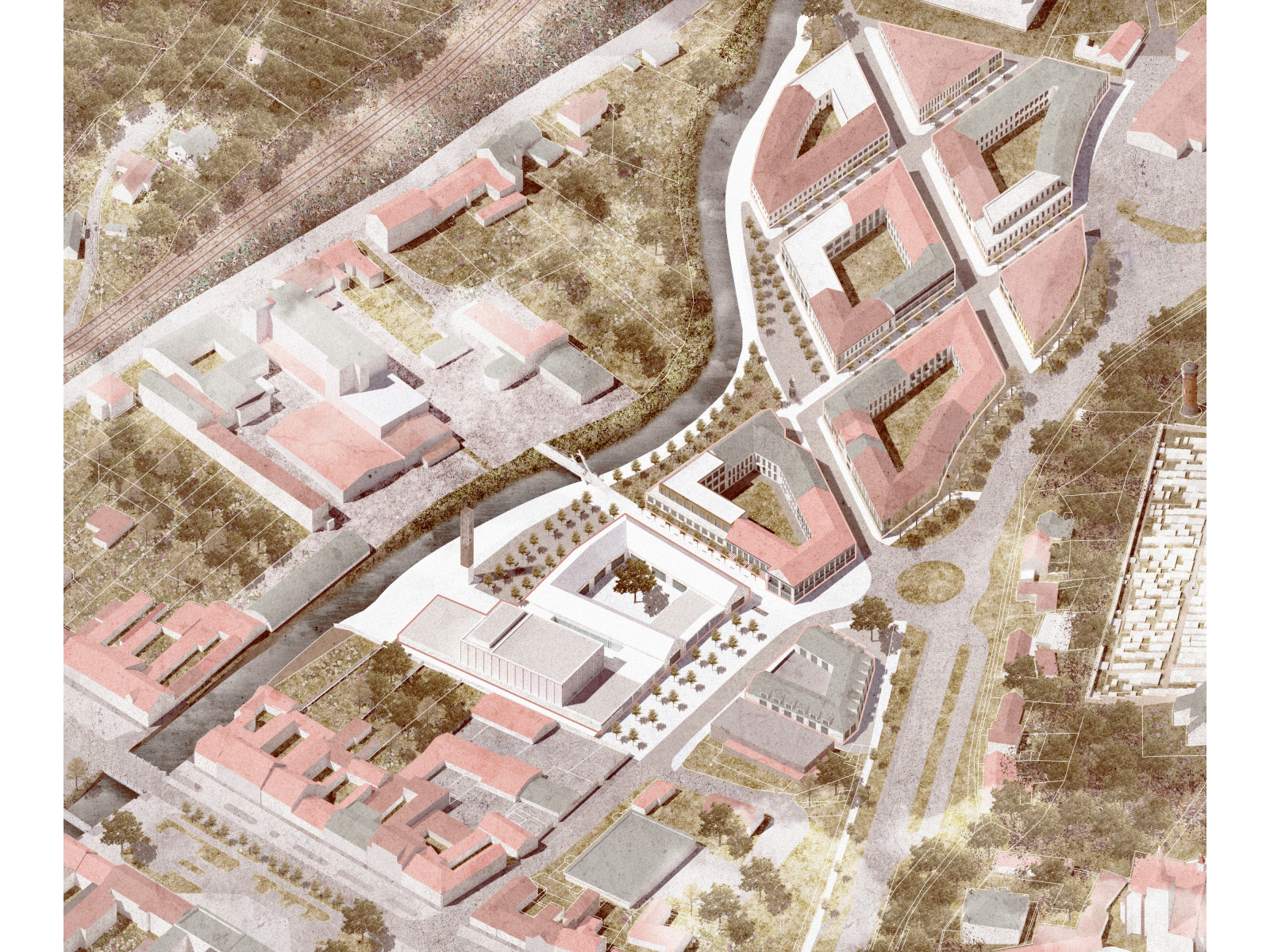 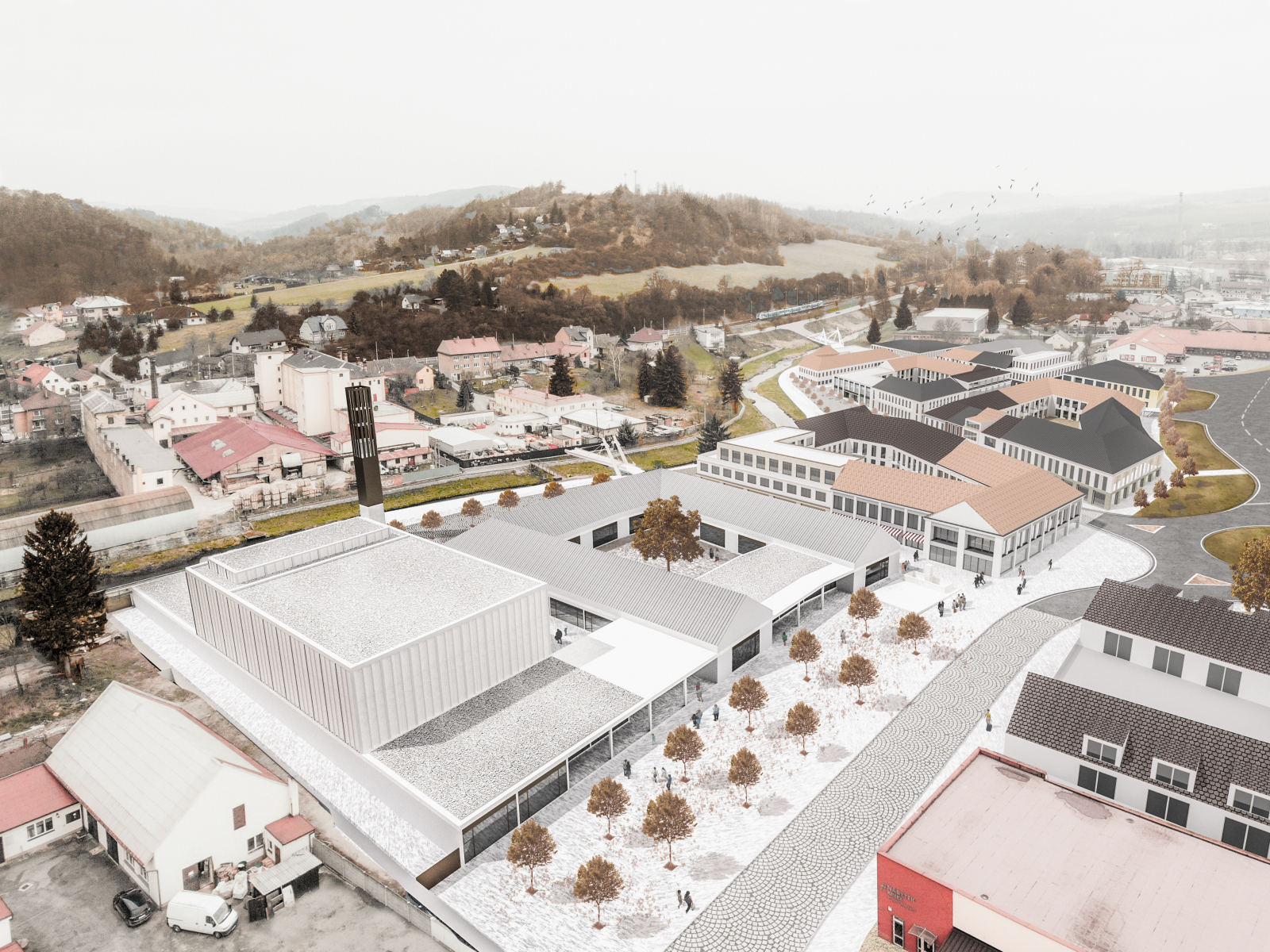 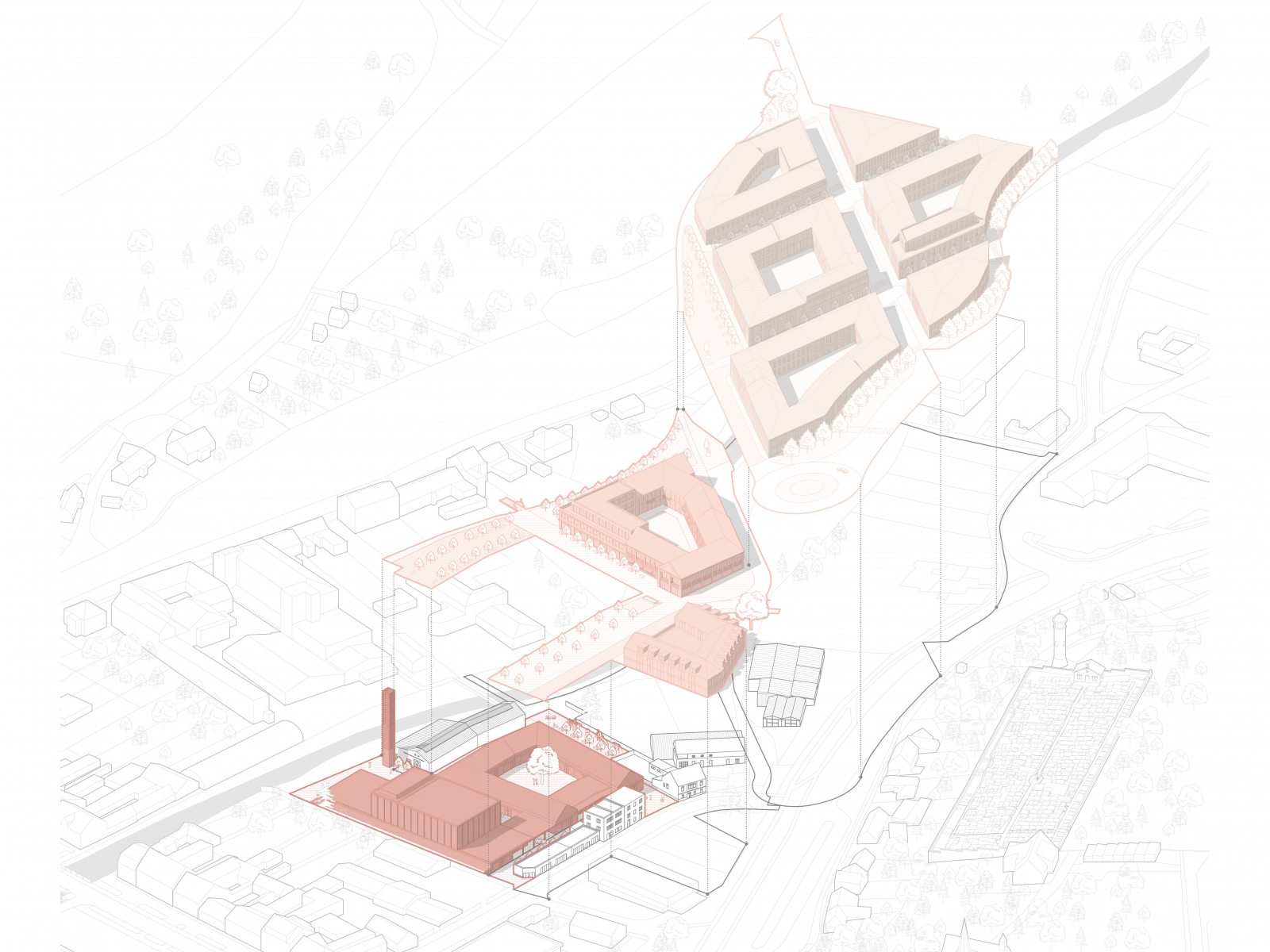 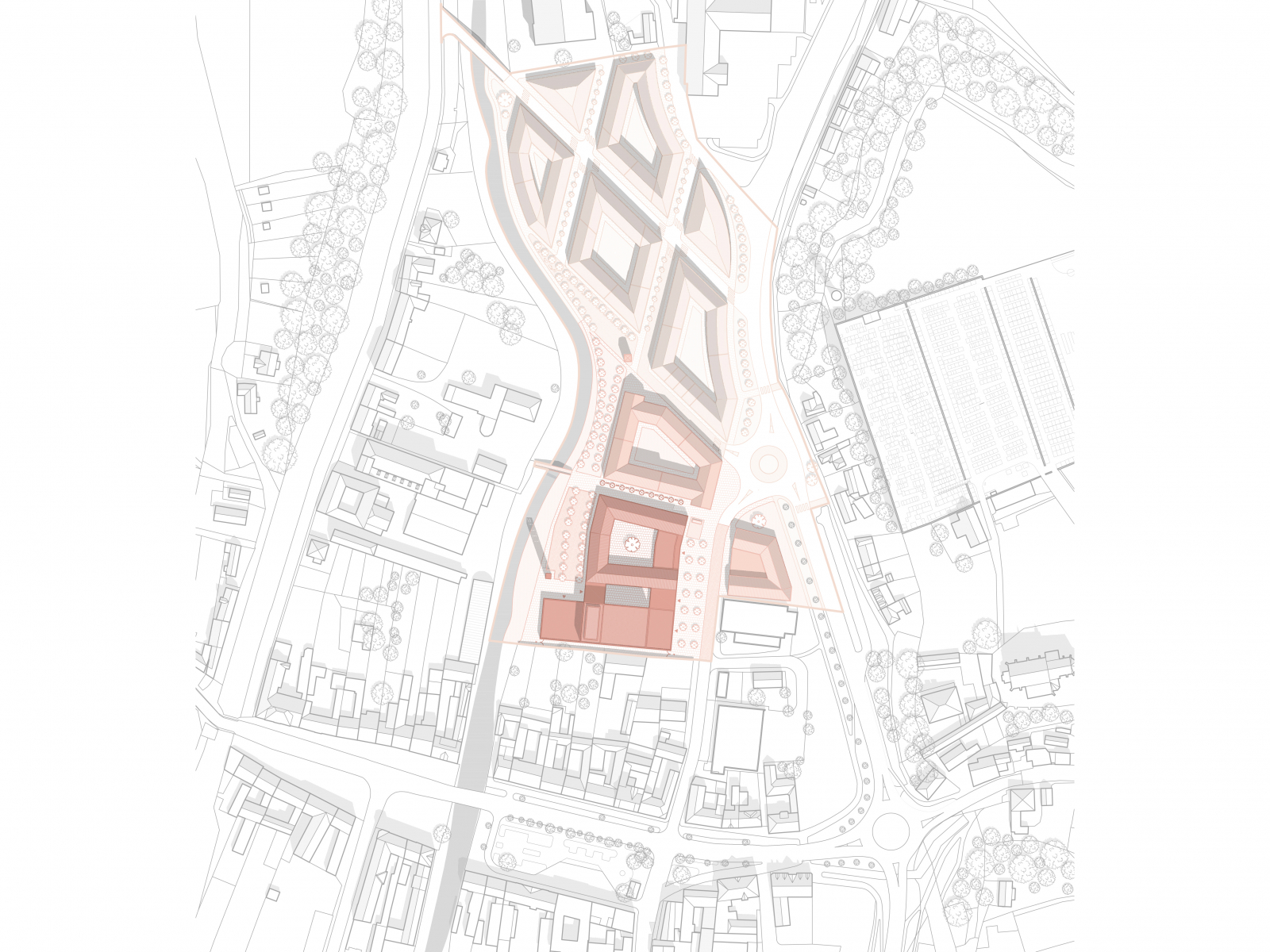 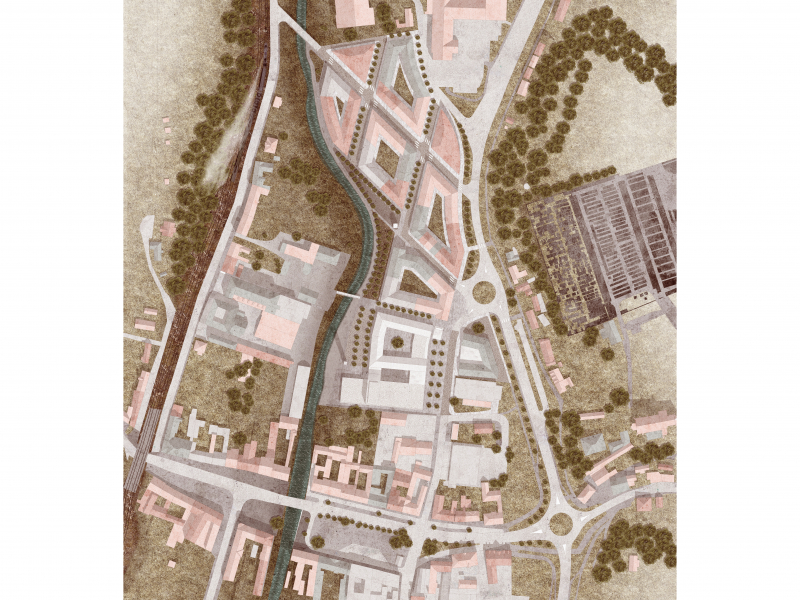 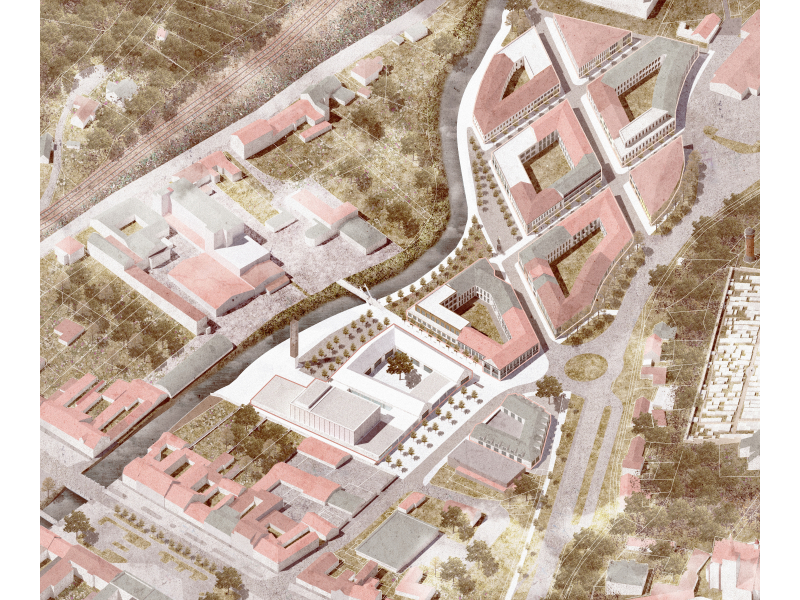 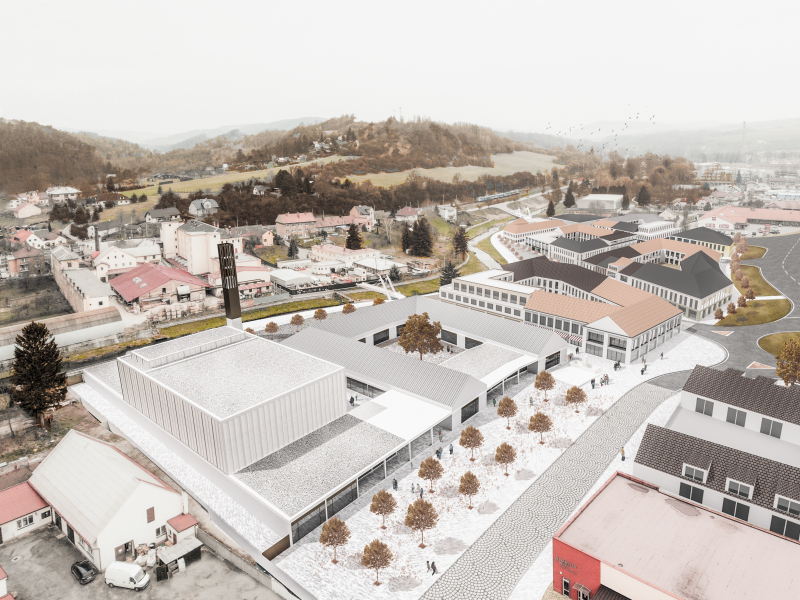 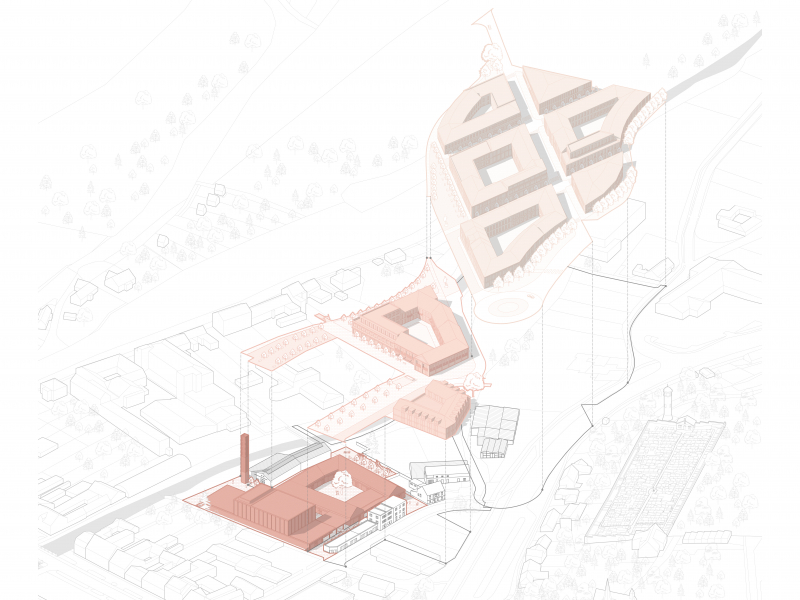 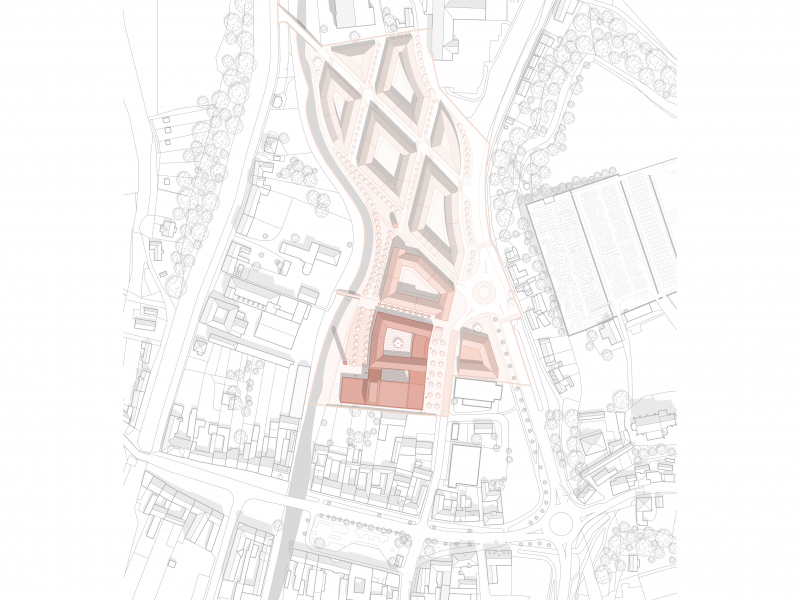