Our office was invited to participate in a competition for the reconstruction of a villa with a listed street facade. According to our analysis, the villa, located in one of the most attractive districts, has undergone a number of alterations and additions. Nevertheless, the front façade itself and the crafted entrance staircase with a fence remained in their original form. On our part, an effort was made to preserve as much of the original structures of the building as possible, but this was not possible due to the poor condition of the structures according to the statics assessment. Therefore, only the protected facade is preserved in the design.

The mass of the new building fully respects the original concept of the building and tries to achieve fidelity to the original volume, even though it was not documented in any way. It was not possible to faithfully connect to the given façade other than the mansard roof, and the simple mass of the single-storey block is thus extended by two more floors of this type of roof. The only difference is that this time the very high attic was terminated by a flat plane of the vegetation roof instead of a ridge. The location of the solitary garden building for the pool directly in the axis of the garden facade of the villa is based on the assignment. This simple building is then reflected on the garden facade in the form of a covered terrace with a central glazed avant-corps. This set thus also serves as an exterior platform for the apartment on the second floor.

The layout of the house is based on the task of creating a multi-family house with an apartment for guests. The full layout of the apartment for investors is shrinking on the adjoining floors in response to the receding attic, but the system remains in a similar spirit. However, the disposition itself changes from the original relatively cramped disposition. Directly opposite the monumental covered entrance, there is a U-shaped staircase leading to other apartments, without compromising the privacy of the individual floors. In front of each apartment there is an entrance and a reception hall from which the visitor can get into a private hall. This leads to a study and a large bedroom, which is open into the adjacent greenery for acoustic protection. There is also the necessary hygiene and bathroom right at the beginning of the hall. The entire end of the building overlooking the garden is then dedicated to the living room with kitchen and dining room in a glass avant-corps. The garden consists of a swimming pool and a garden house including a workroom, gym, sauna and barbecue shed. The required garden equipment is located in the single building.

Expressively, the building tries to build on the original means of the architect. Simple sets of repeating smaller wooden windows are complemented by Turkish travertine linings. This set-up is reflected in the same layout on the other floors, and on the second floor, the attic windows are set so as not to disturb the simple expression of the building. The general effort to support the simplicity of the original design is also reflected in the materiality of the villa. The roof tiles are glazed in white to support the unity of the new material. The stone plinth of the building is preserved and is followed by high-quality natural plaster with white paint. The simple color palette is disturbed only by the burgundy color, which has found a place on the reconstructed entrance doors and numerous flowerpots in front of the windows. The original stucco of the facade is of course preserved and is copied into the cornice, which completes the entire building. On the garden side, the house in larger formats is complemented by white aluminum windows and a wooden structure of the covered terrace and garden house. 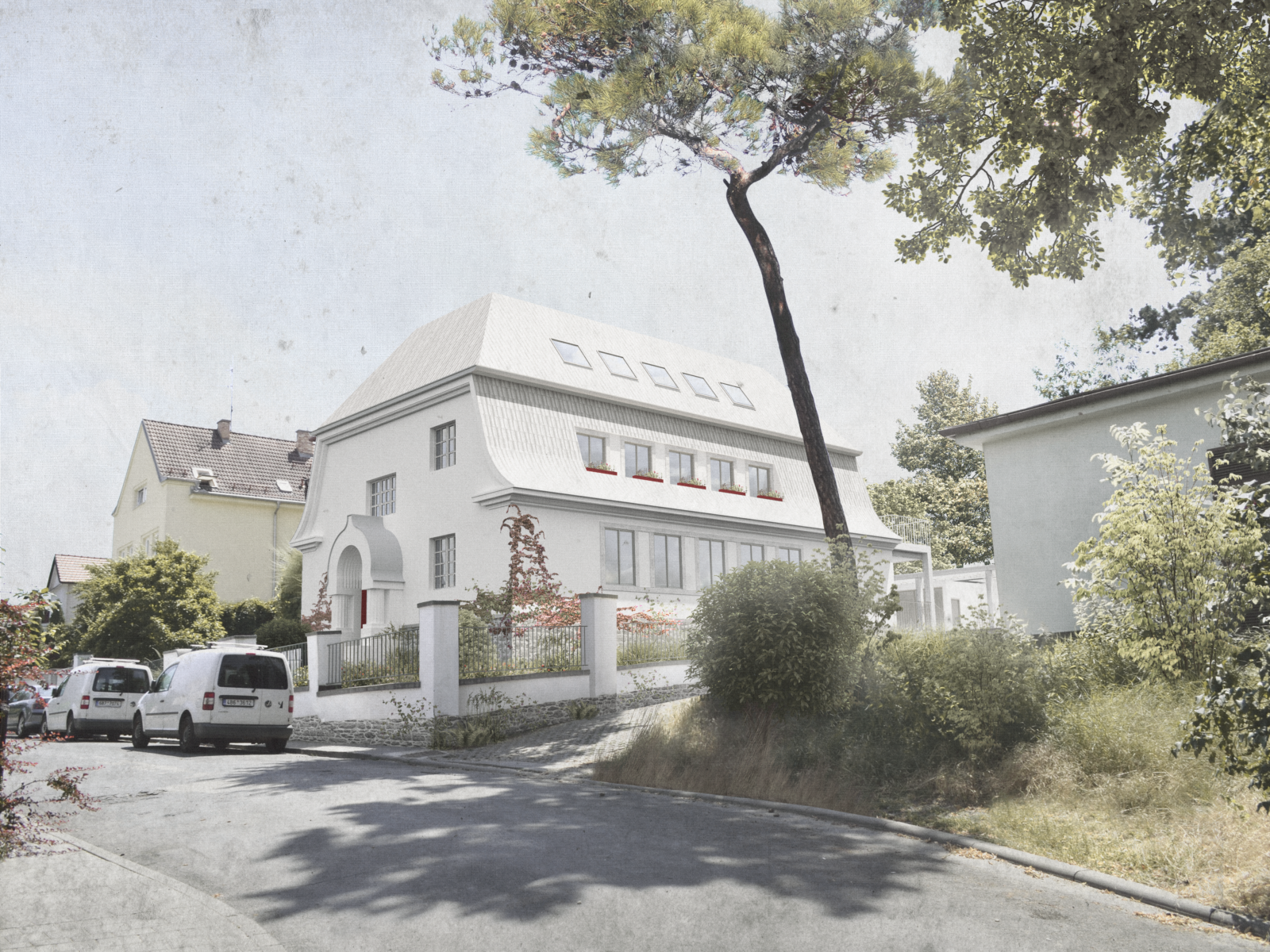 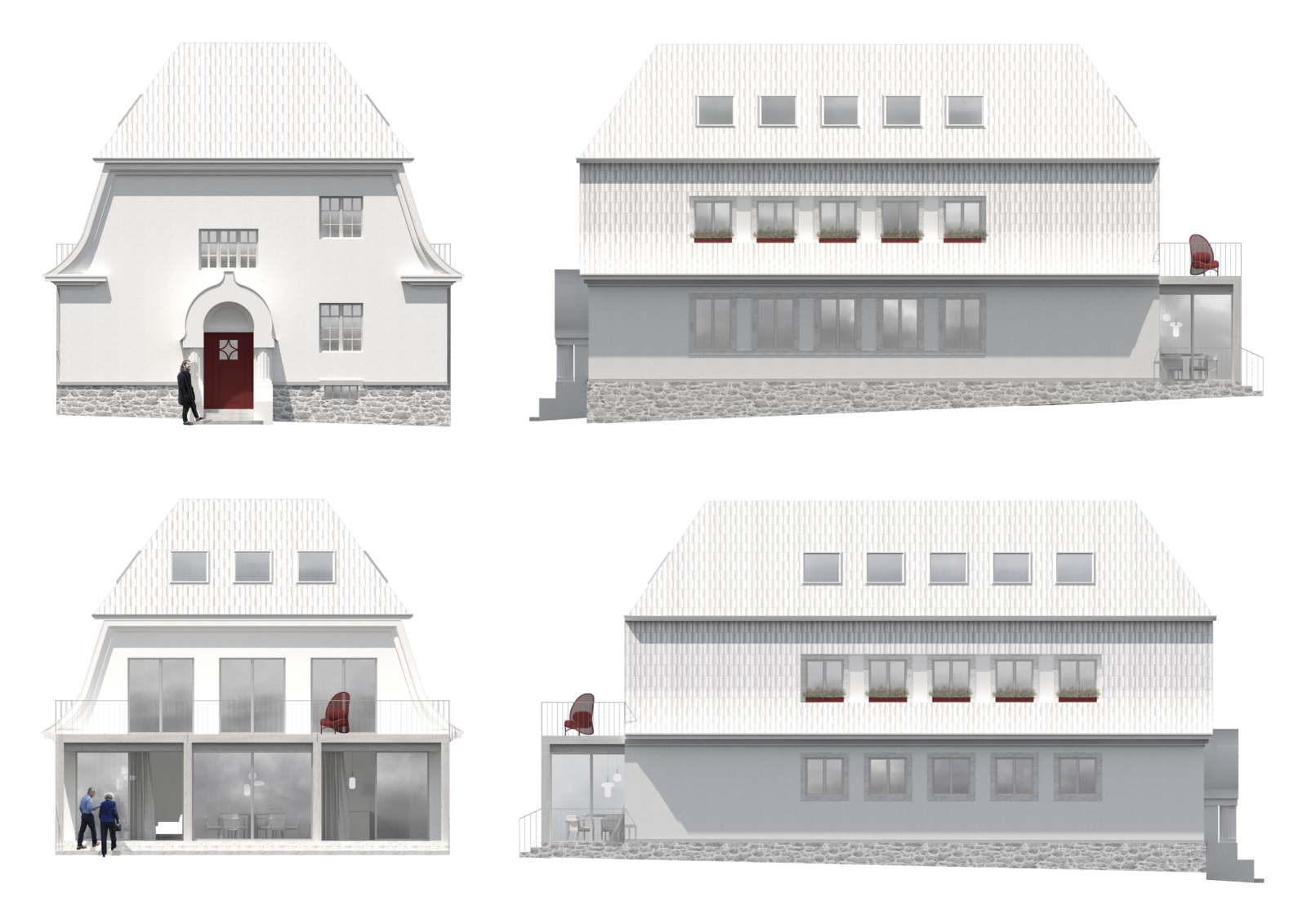 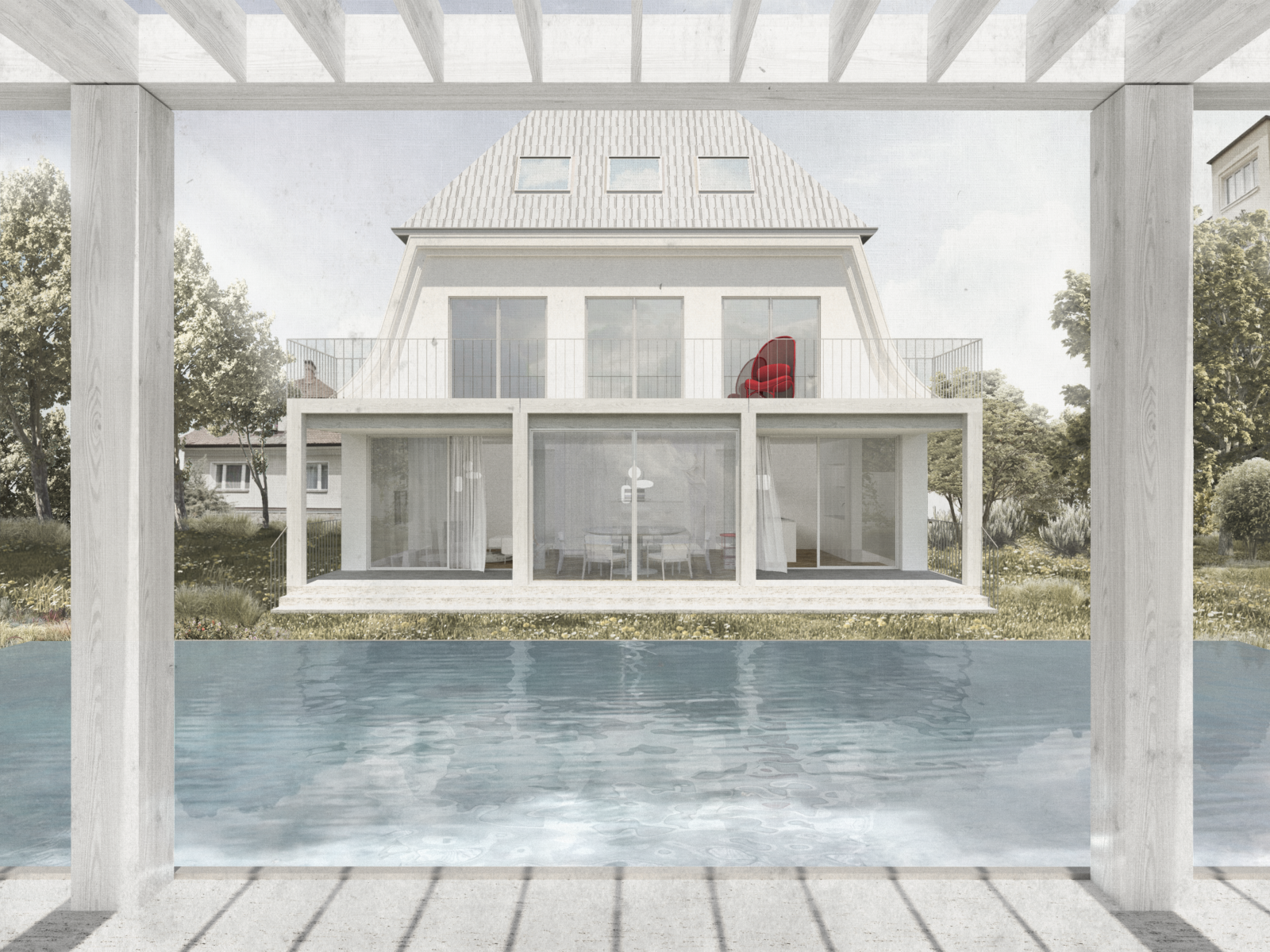 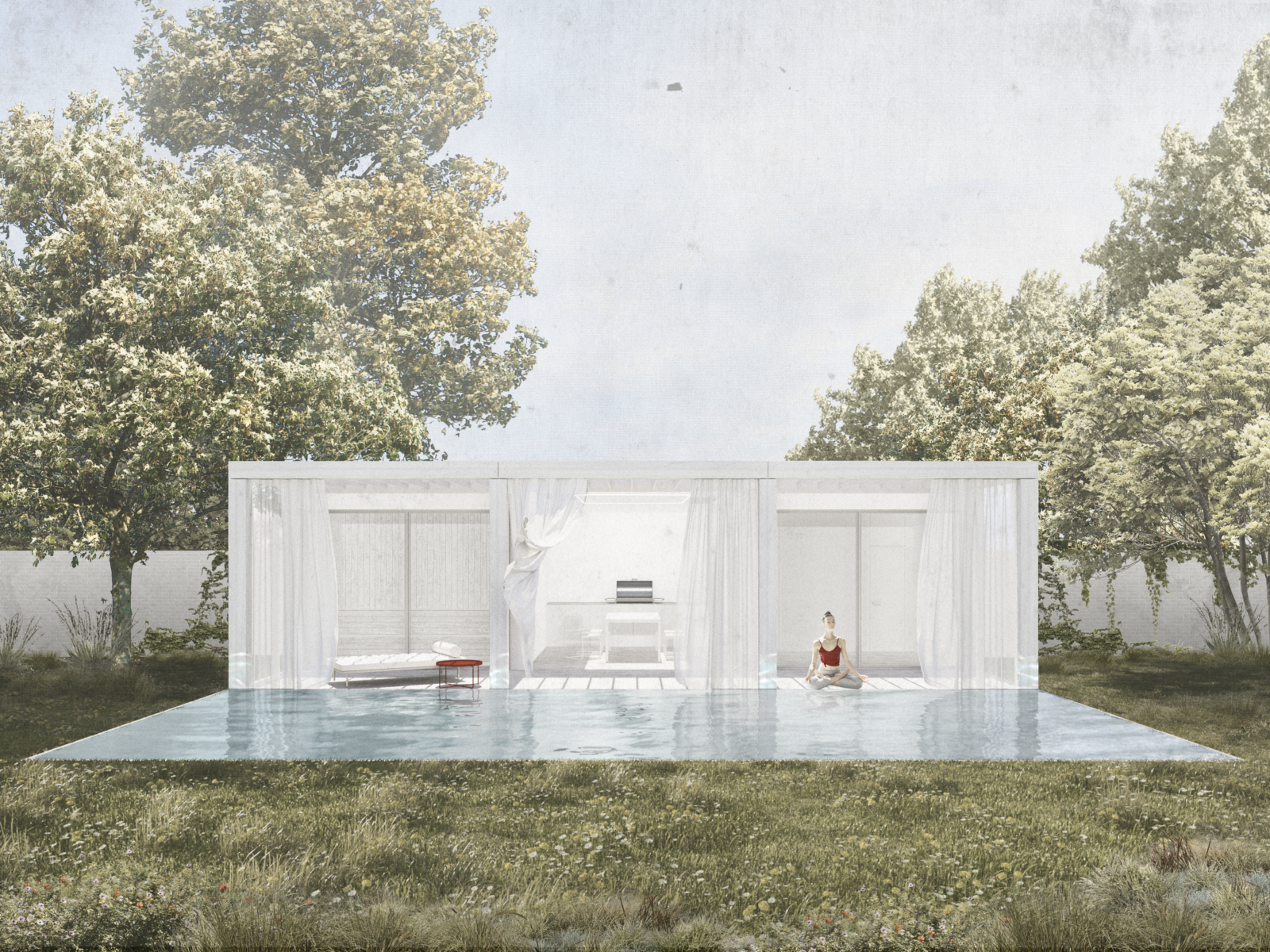 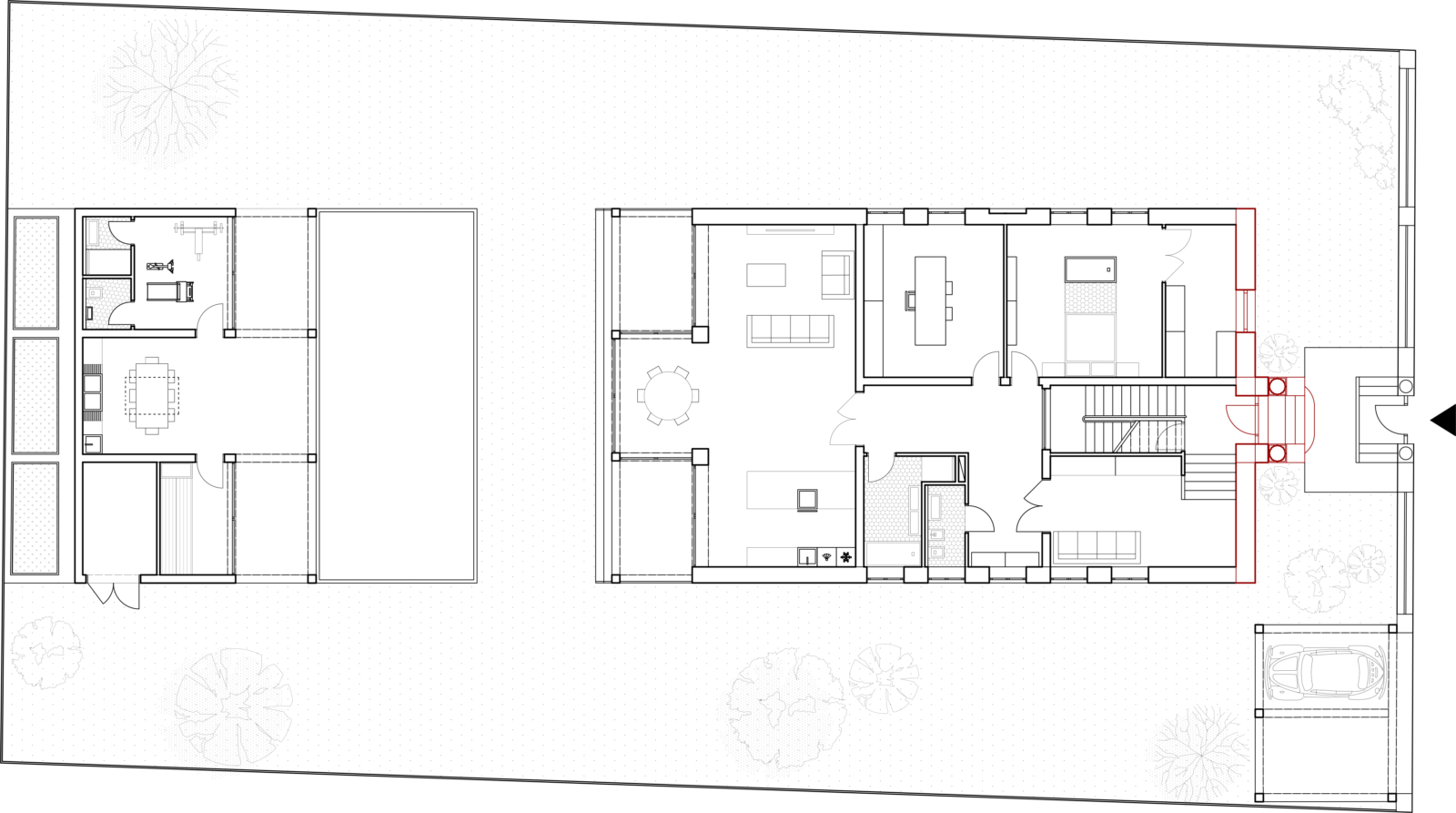 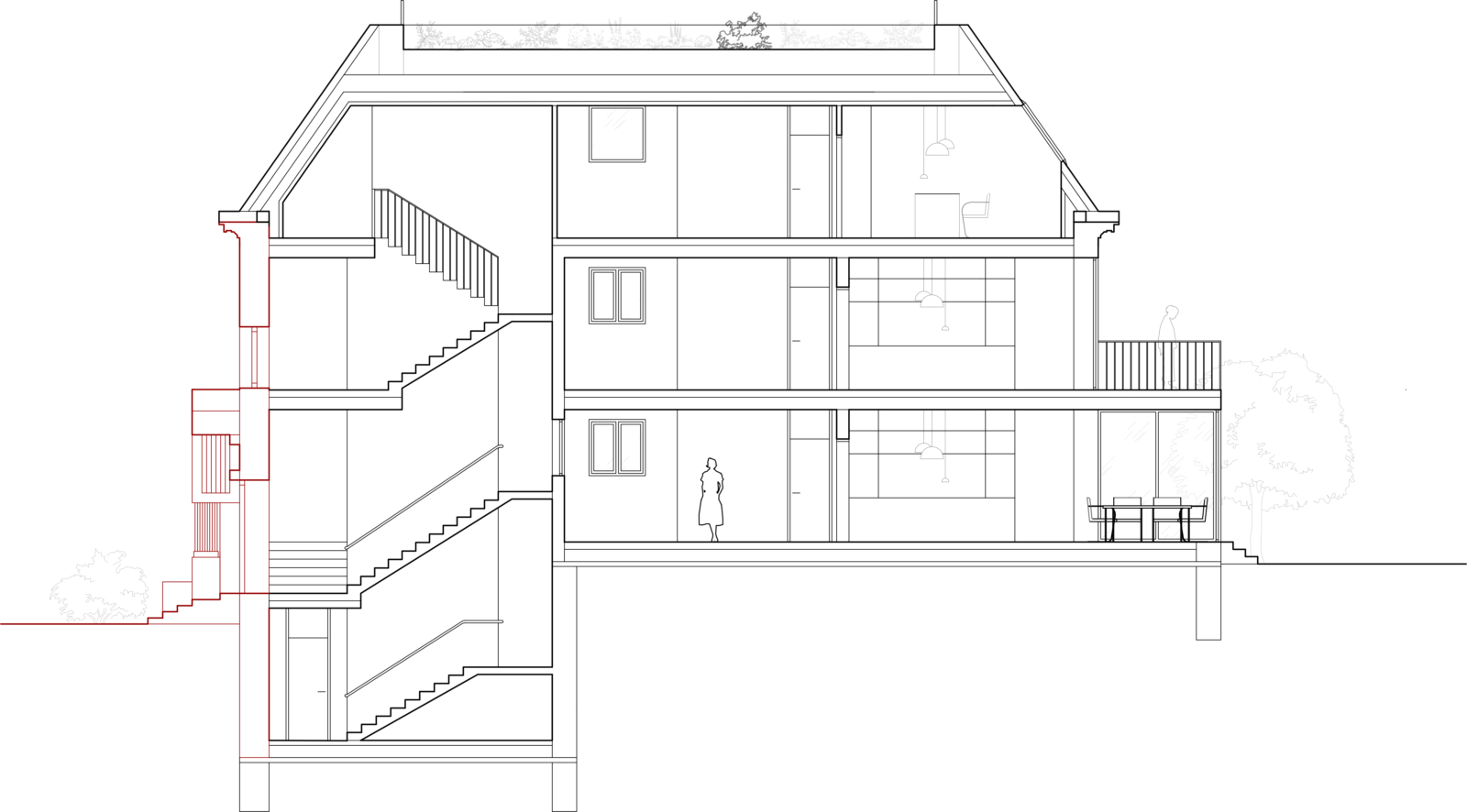 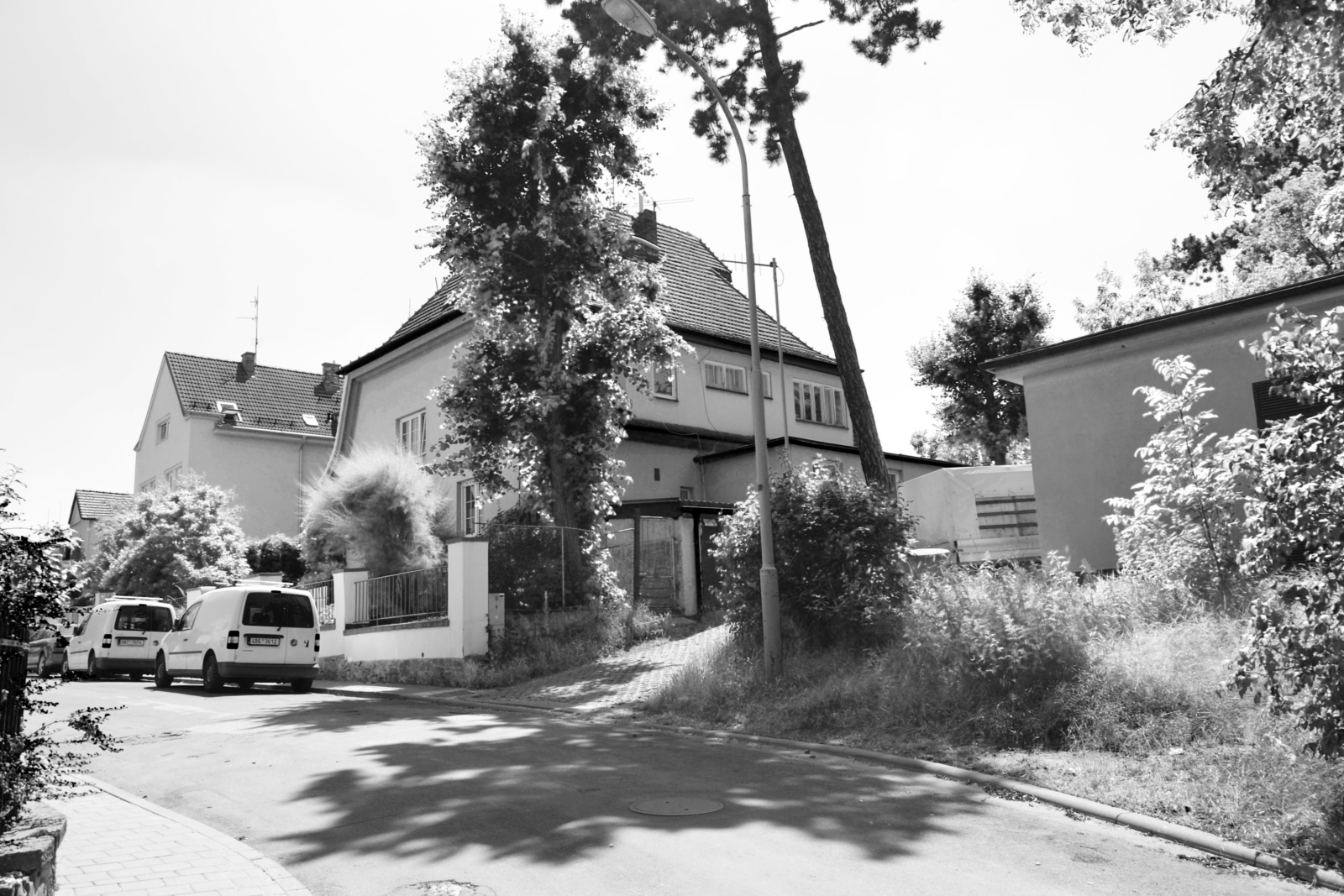 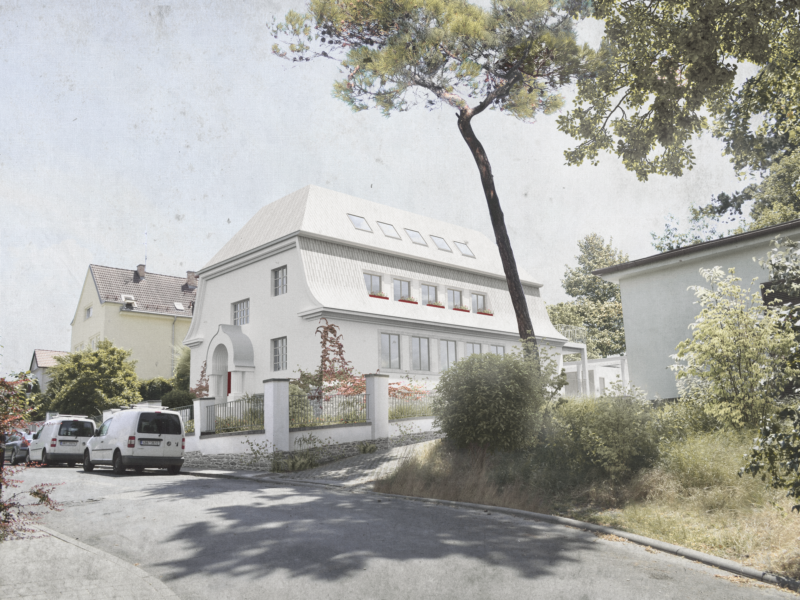 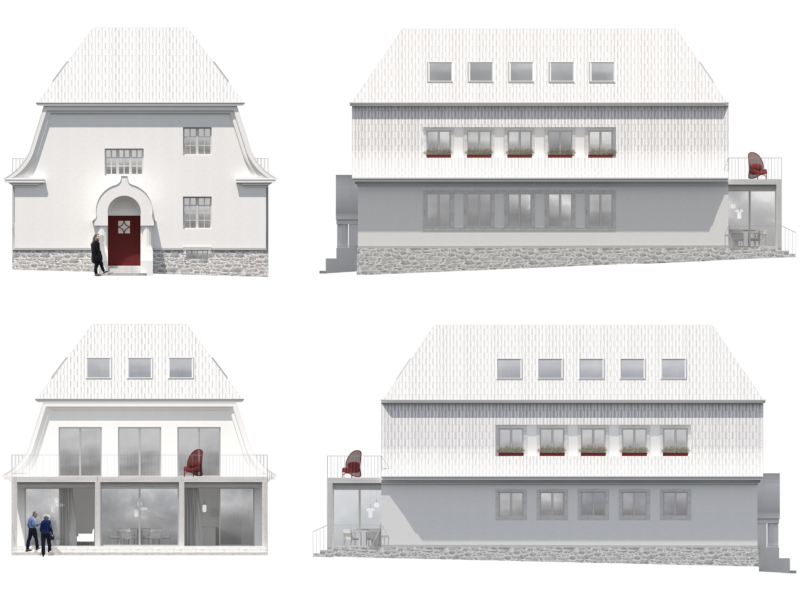 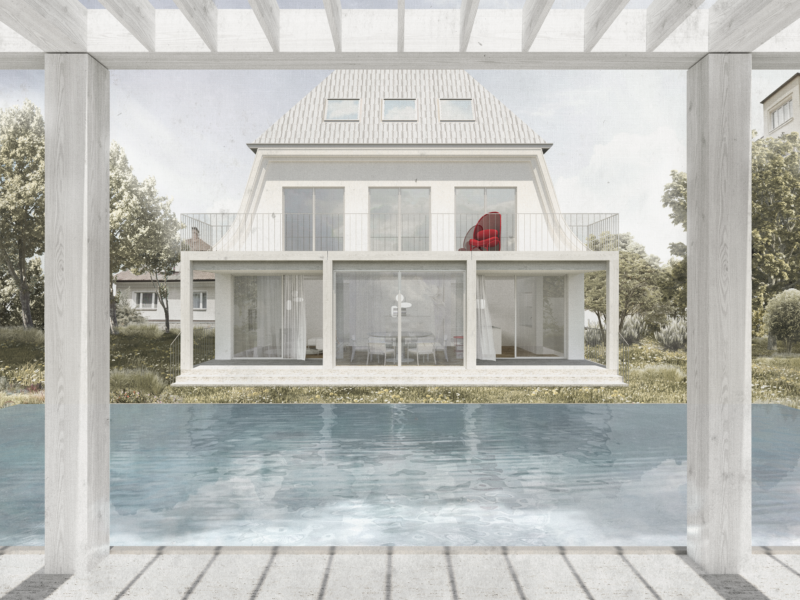 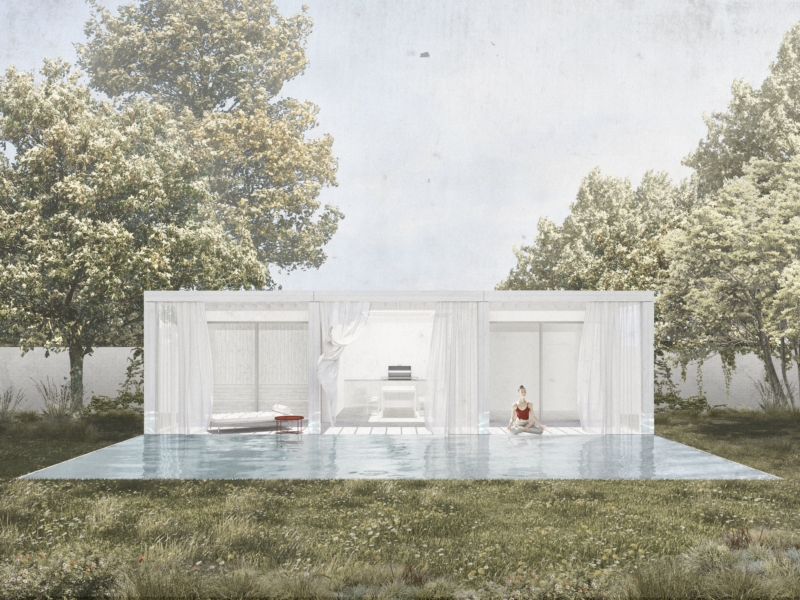 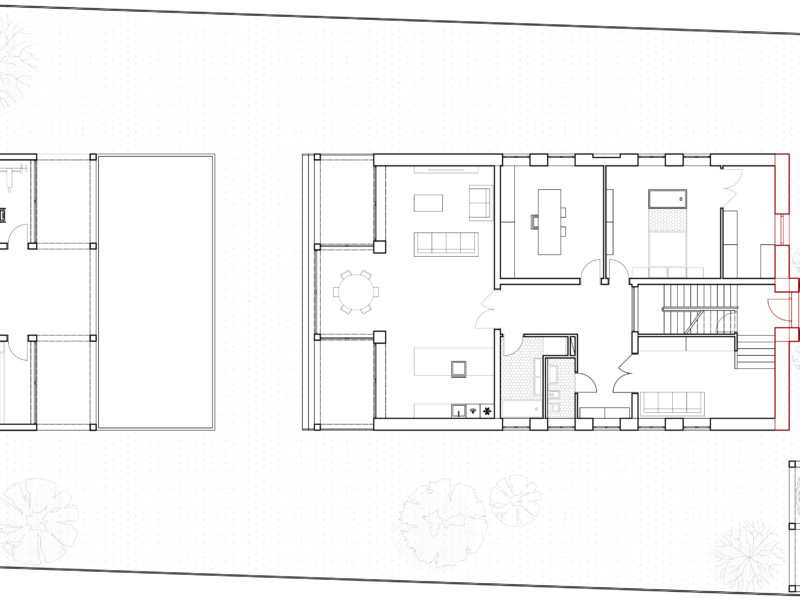 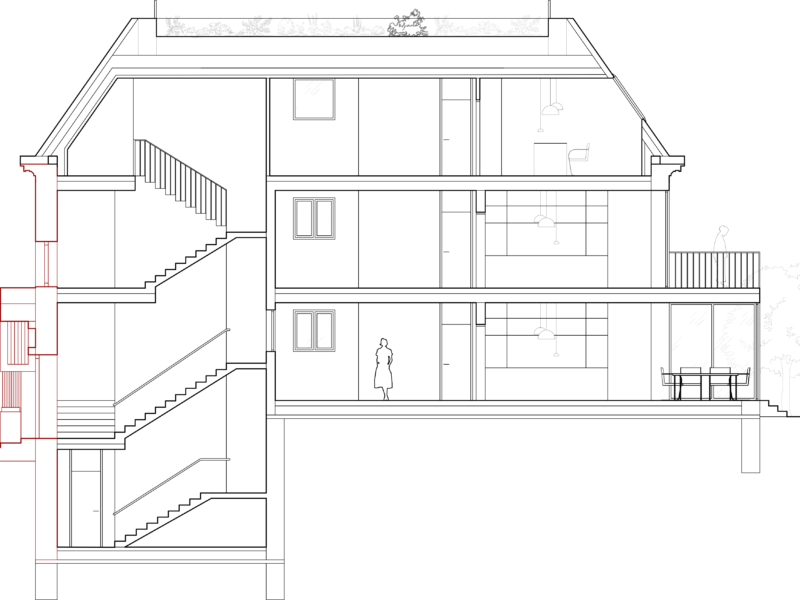 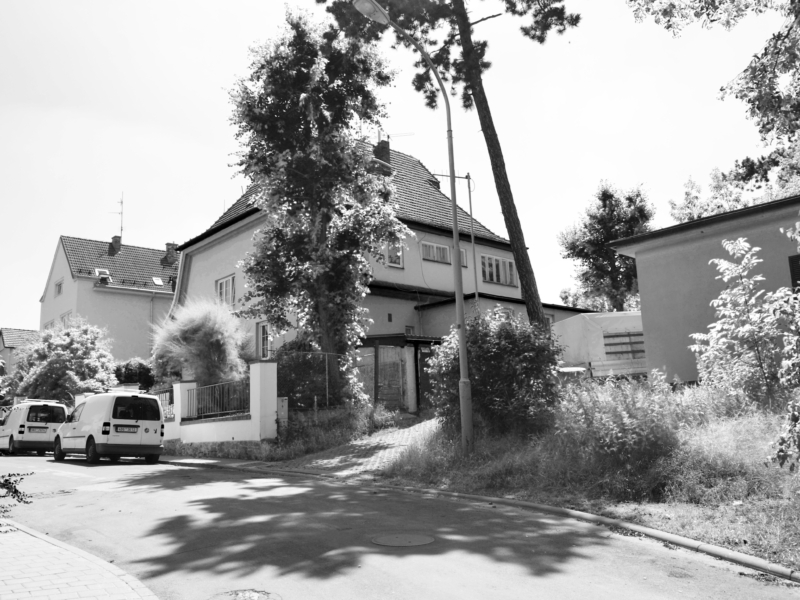