The apartment building project complements a wide gap on Škrochova Street in the Brno-Židenice district. This assignment was particularly interesting for our office, as it seamlessly follows our already implemented project of reconstructing the neighboring building. The land, which is located in a low-rise development of family and apartment houses, is characterized primarily by its width and sloping terrain, which significantly affected the final design. As well as the current principle of street parking volumes, which created the central motif of the building – the wall of the first floor with a tectonic façade of black concrete and contrasting lightened recessed upper floors in white plaster and gold details.

In the first phase, it was necessary to determine not only the maximum height of the building, which seamlessly connects to the ridge of the roof of the neighboring house and also to its material concept. This directly refers to the surrounding development, which builds garage spaces in the area of ​​the front gardens or is delimited by a high brick fence to the adjacent street. Our solution was to continue this trend and to place a single-storey volume with stacker parking along the street at the ground floor level. This made it possible to cover the capacity requirements of all the housing units created and thus create areas that serve as green summer terraces for apartments on the first floor. The main mass of the apartment building then rises to the height of three floors with a residential attic, which is located under a partially gabled roof with dormers. In its form, it follows the morphology of the surrounding buildings, while making maximum use of the potential of the land.

The design responds to the sloping terrain mainly with its height and functional division. Due to the terrain difference on the north-eastern façade, the underground floors are supplemented with residential capacities, which are oriented to a quiet courtyard, while in the street part of these floors there are already mentioned parking stackers and the main façade of the apartments on higher floors.

The first floor is dedicated to parking, representative entrance areas, operating facilities with a utility room, a room for waste storage and a bike shed. The main linear communication core, including a linear staircase and an elevator shaft, is located on the north-west courtyard facade of the house. The apartments on this floor are designed as one-room with operational and hygienic facilities. Their orientation is to the northwest. The typical – second and third – floor includes four residential units with a layout of 1+KK and 2+KK. The peripheral two-room flats are designed as transversely ventilated. The main living rooms then open through windows through the terraces or balconies. In the attic, the layout of the apartments respond to the reduced clearance and the presence of dormers. The basement is then supplemented by two flats with a layout of 3+KK.

Expressively, the house follows not only the surrounding buildings but also the tradition of apartment buildings, which were with their more expressive facade oriented to the street, while the courtyard was designed sparingly and with an emphasis on function. The street façade on the ground floor is dominated by a tectonic alternation of pilasters and lintels, which is followed by a regular grid of French windows at the level of the second and third floors, amplified by a block of protruding balconies with vertically divided railings. Roof dormers are a continuation of the grid in the lower floors. The facade in the courtyard emphasizes the function. While the living rooms in the basements are lit by French windows, the following floors combine the balcony doors of the apartments with striped under-ceiling windows and polycarbonate screens of the communication core. The material solution emphasizes the differentiation of individual floors and a description of the functional division of the house. The ground floor with stackers and the underground floor are made of black exposed concrete with tectonic arrangement. In contrast to them, a representative lee of the entrance is covered with panels in the shade of “champagne”. Aluminium window frames, webbing railings and inter-window cladding for under-ceiling strip windows are also made in the same shade. The roof covering is considered to be white folded sheet metal to support the contrast between the plinth and the body of the house. The floors of the entrance area and communication cores will be made of light terrazzo with a contrasting black border.
předchozí | další
1/11 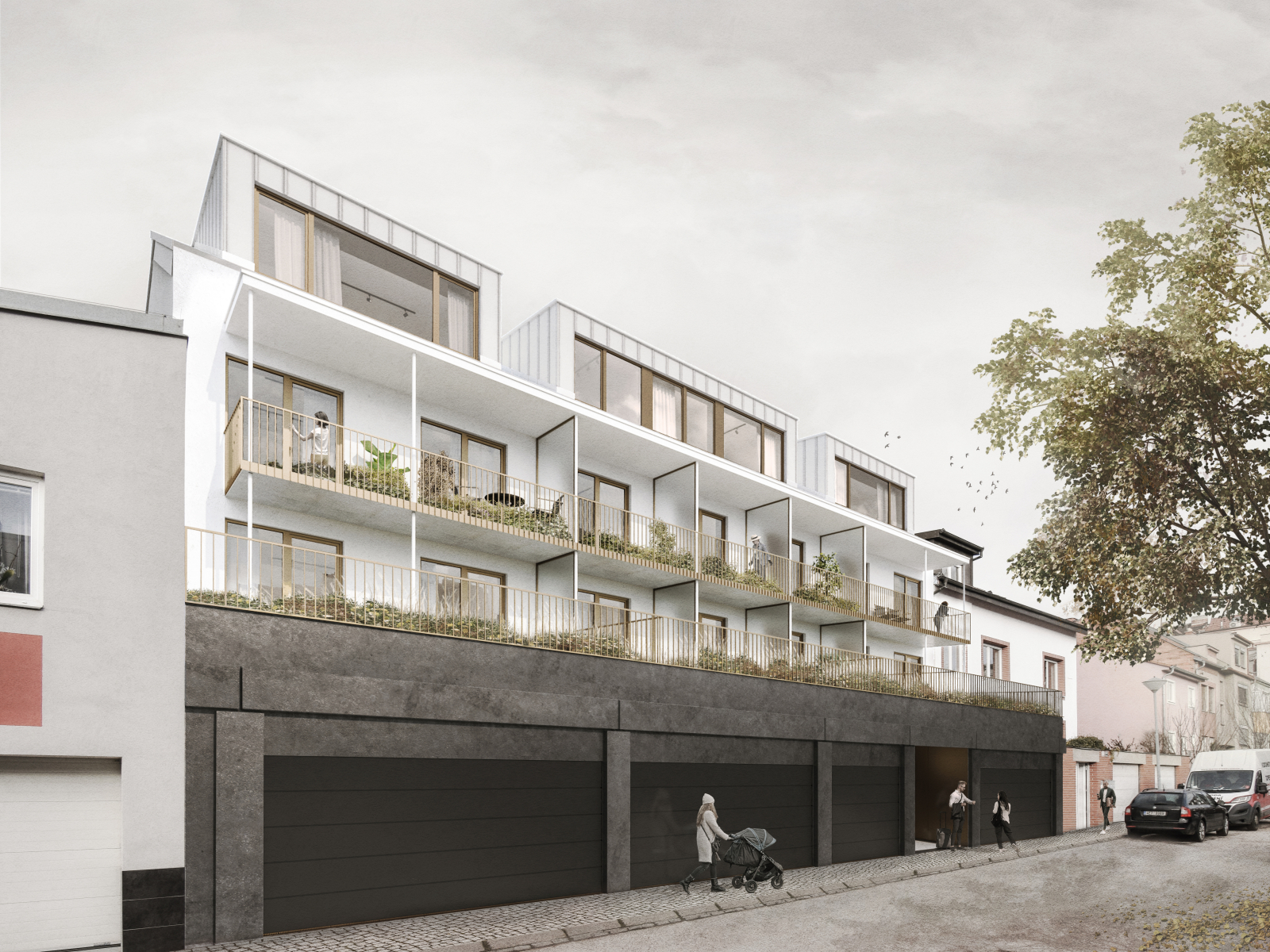 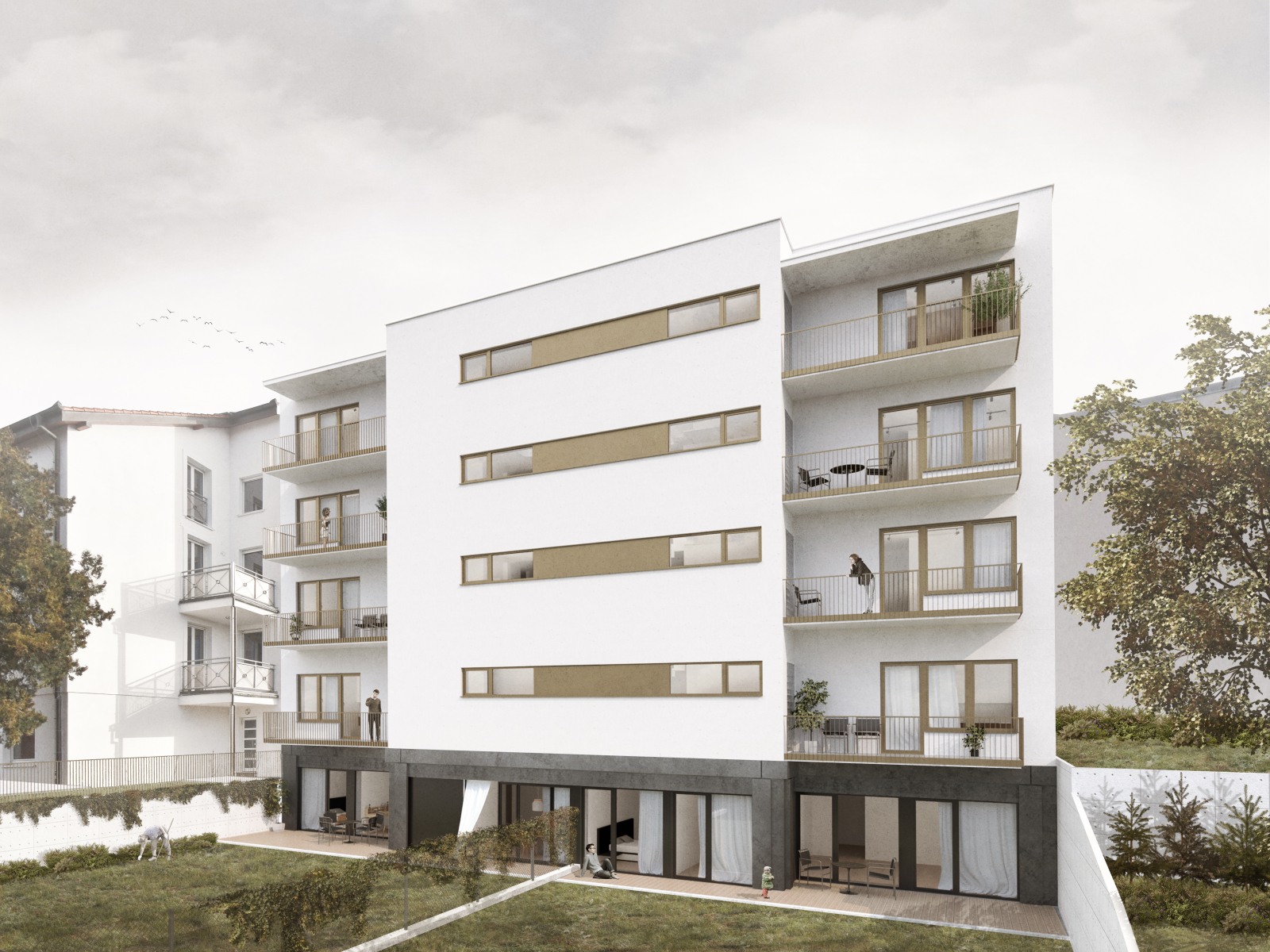 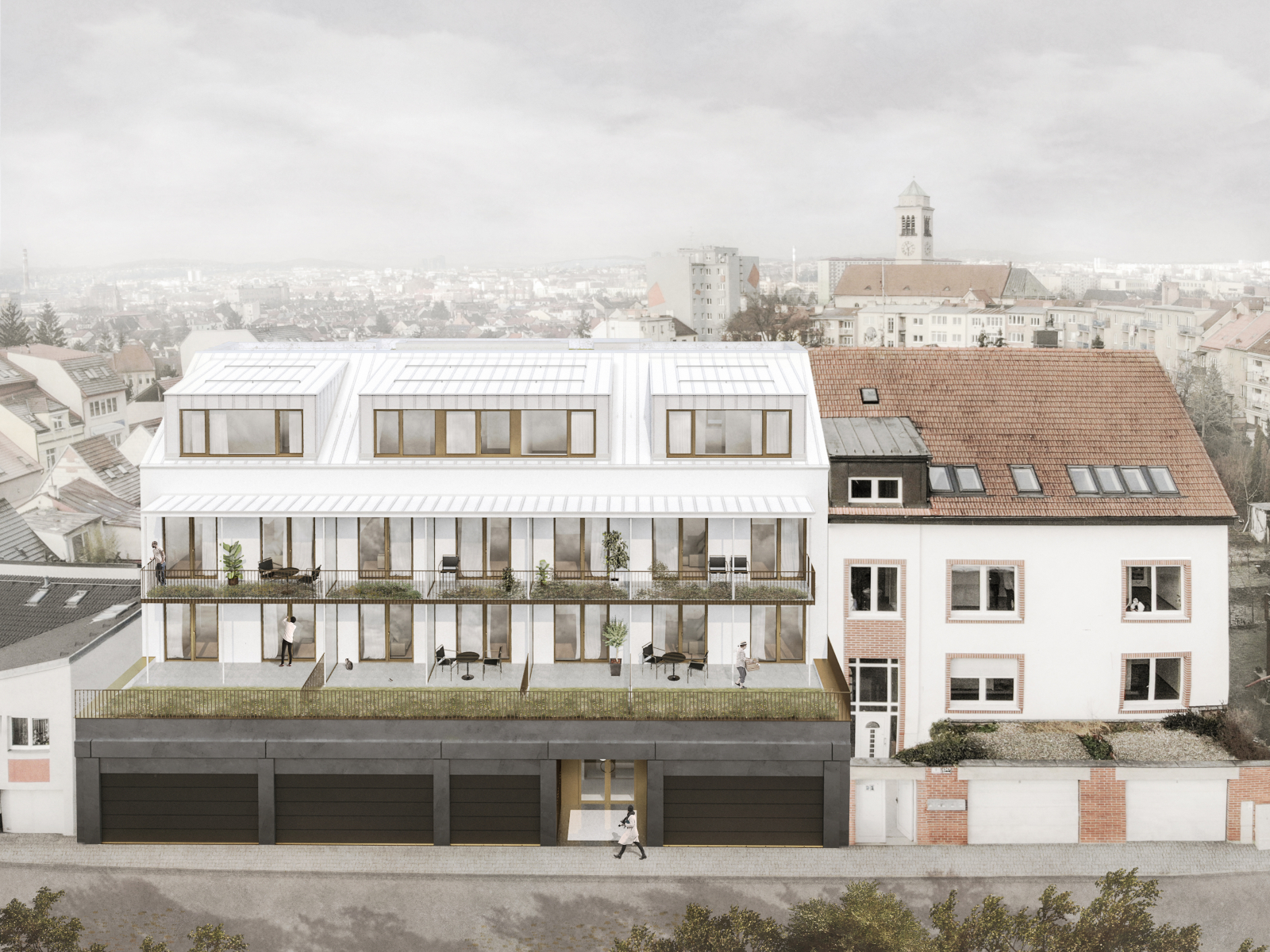 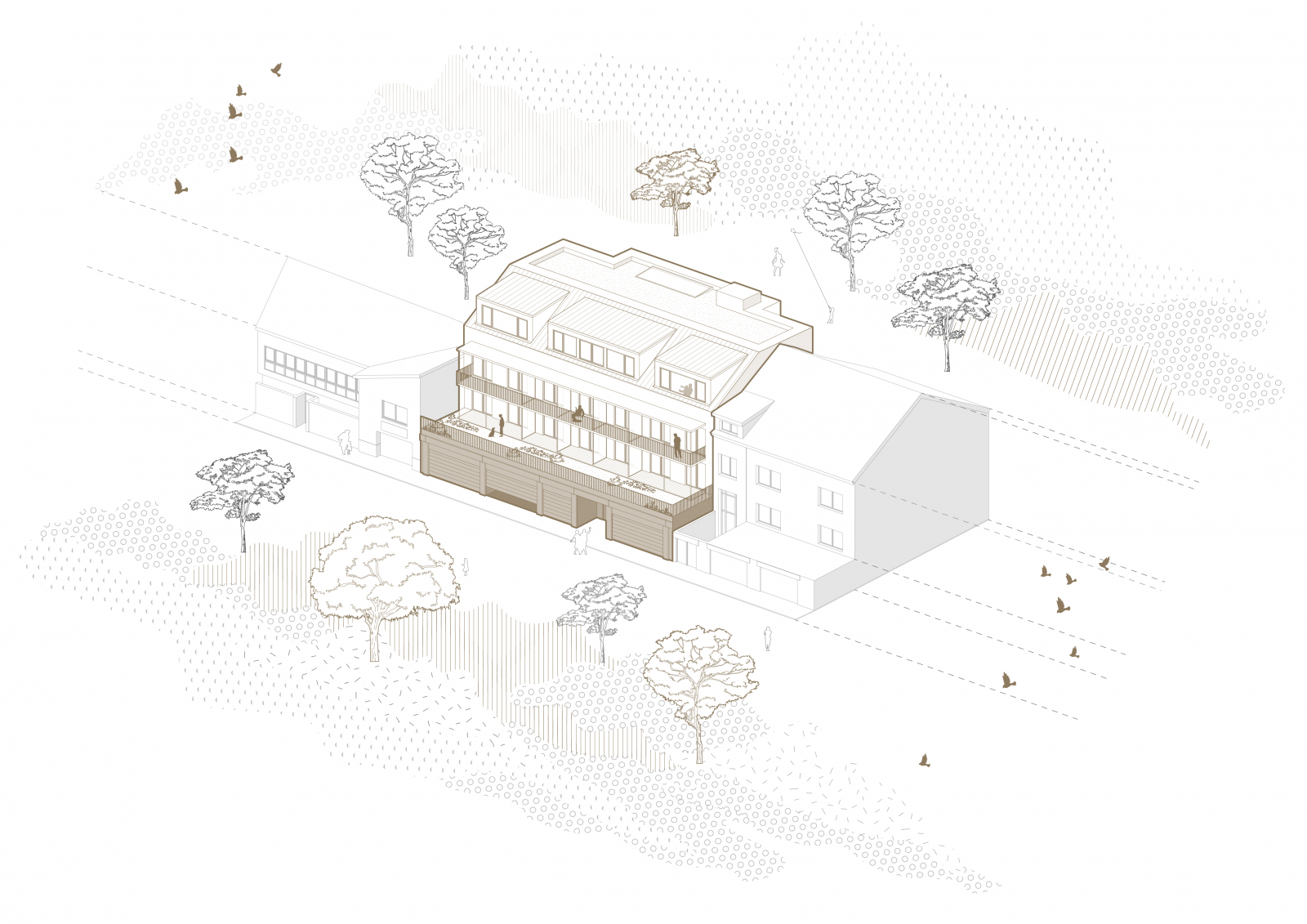 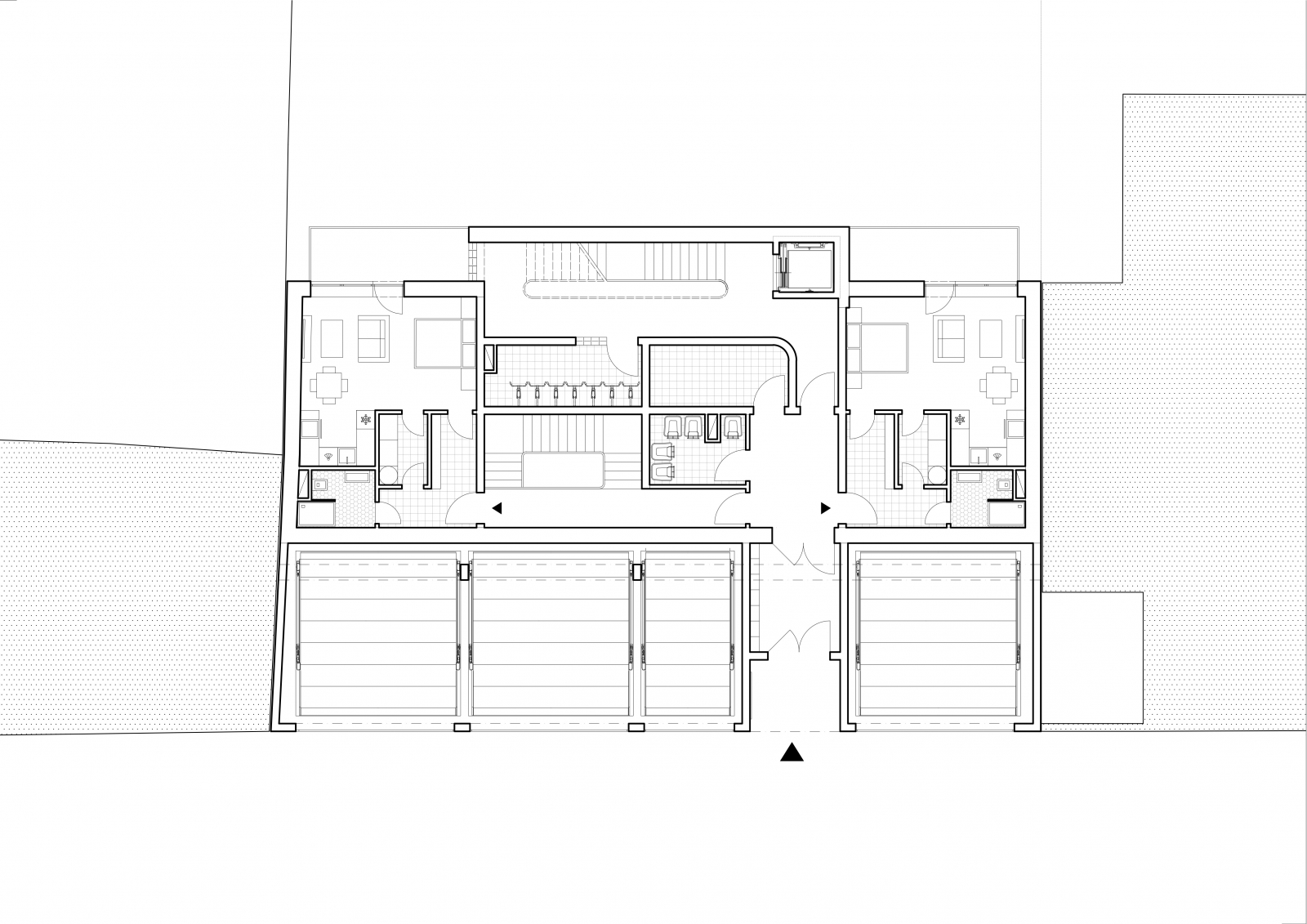 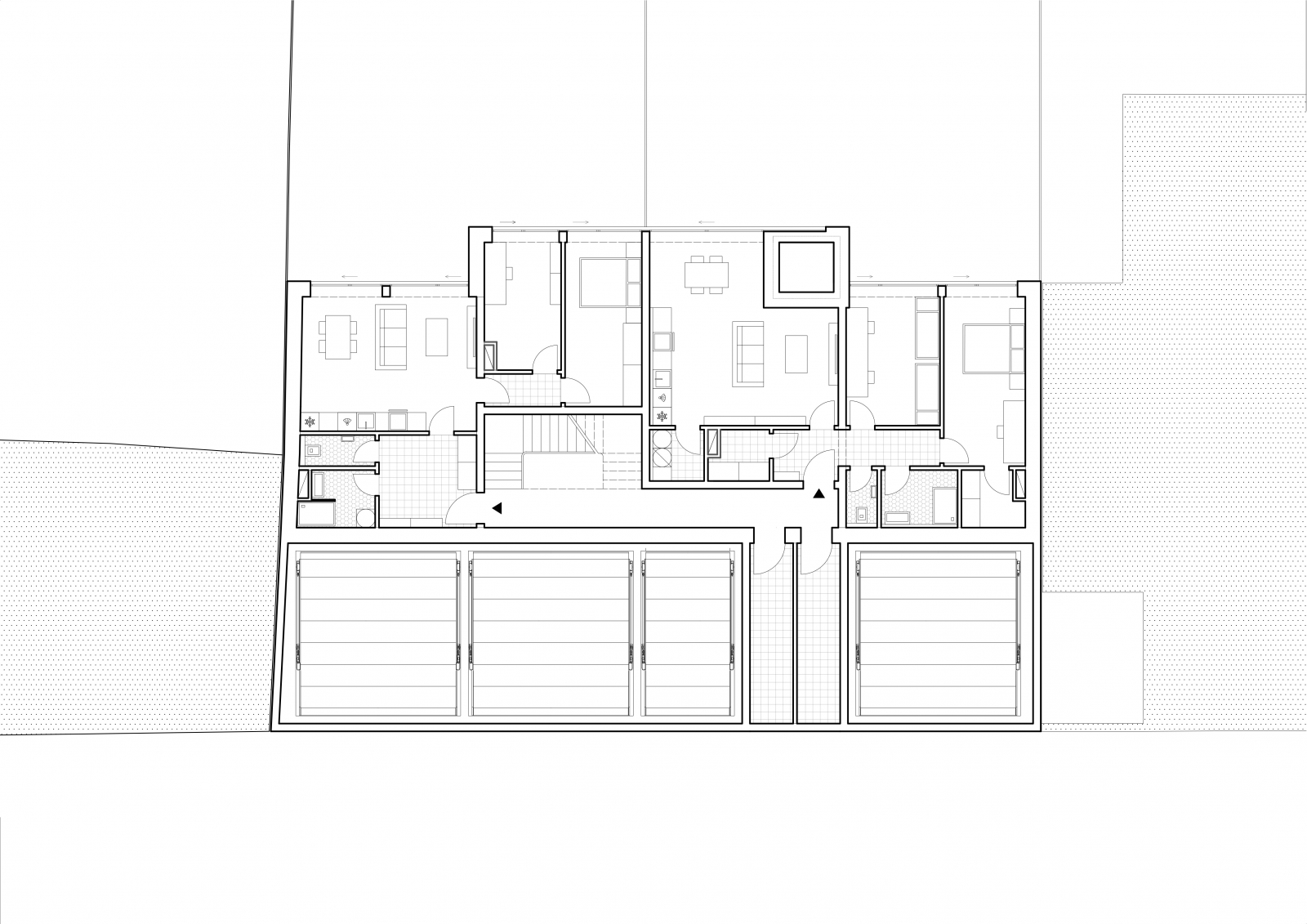 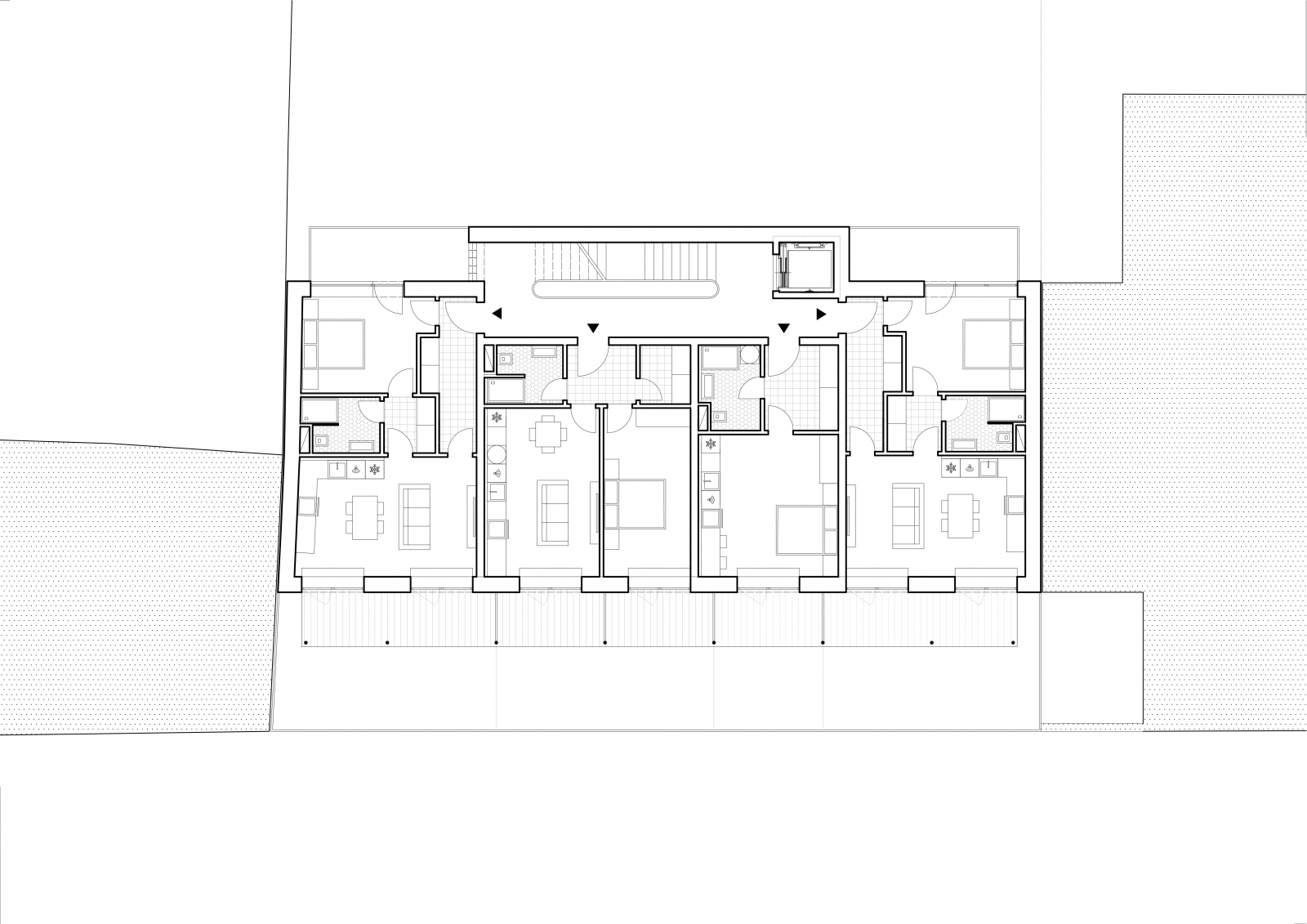 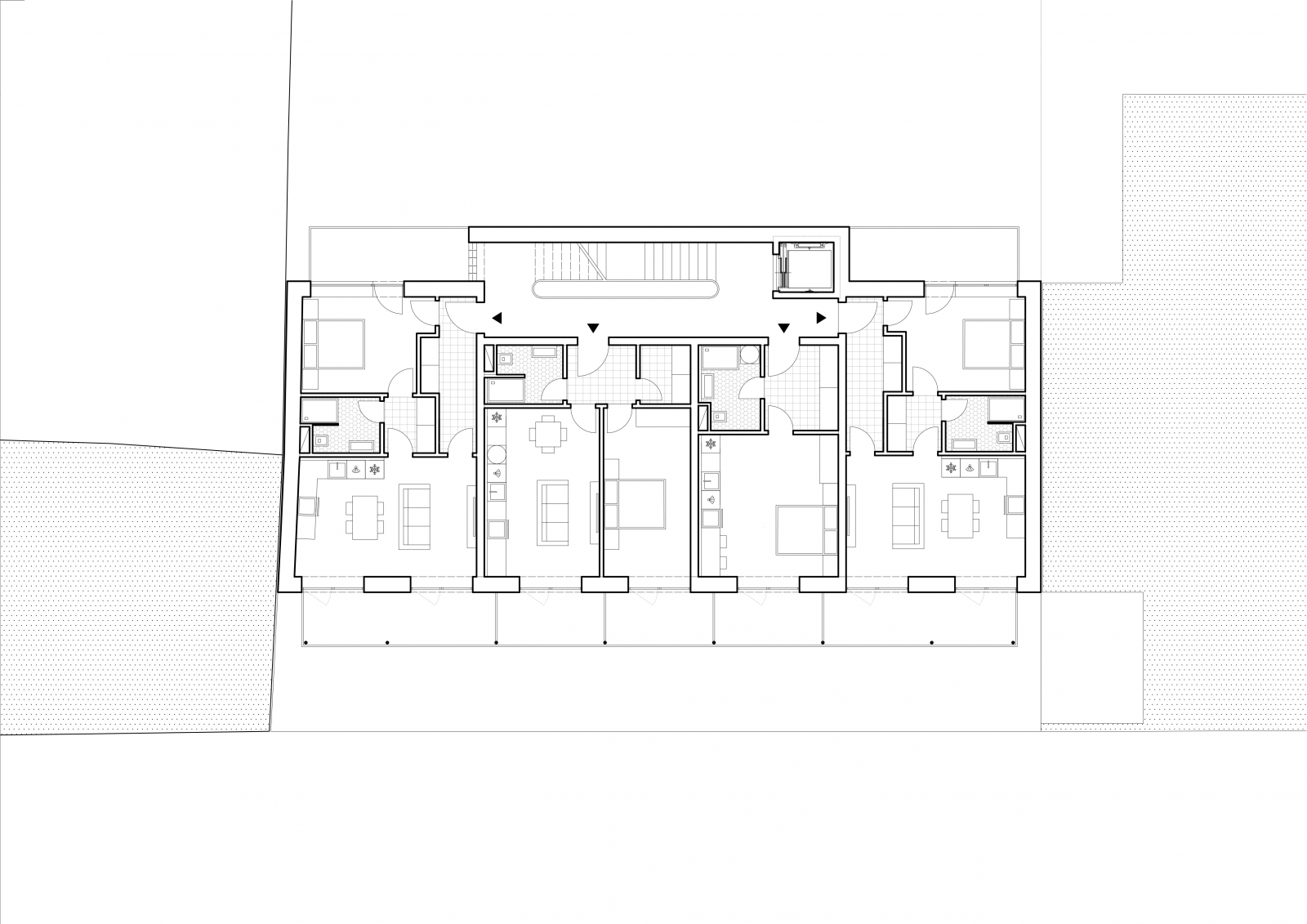 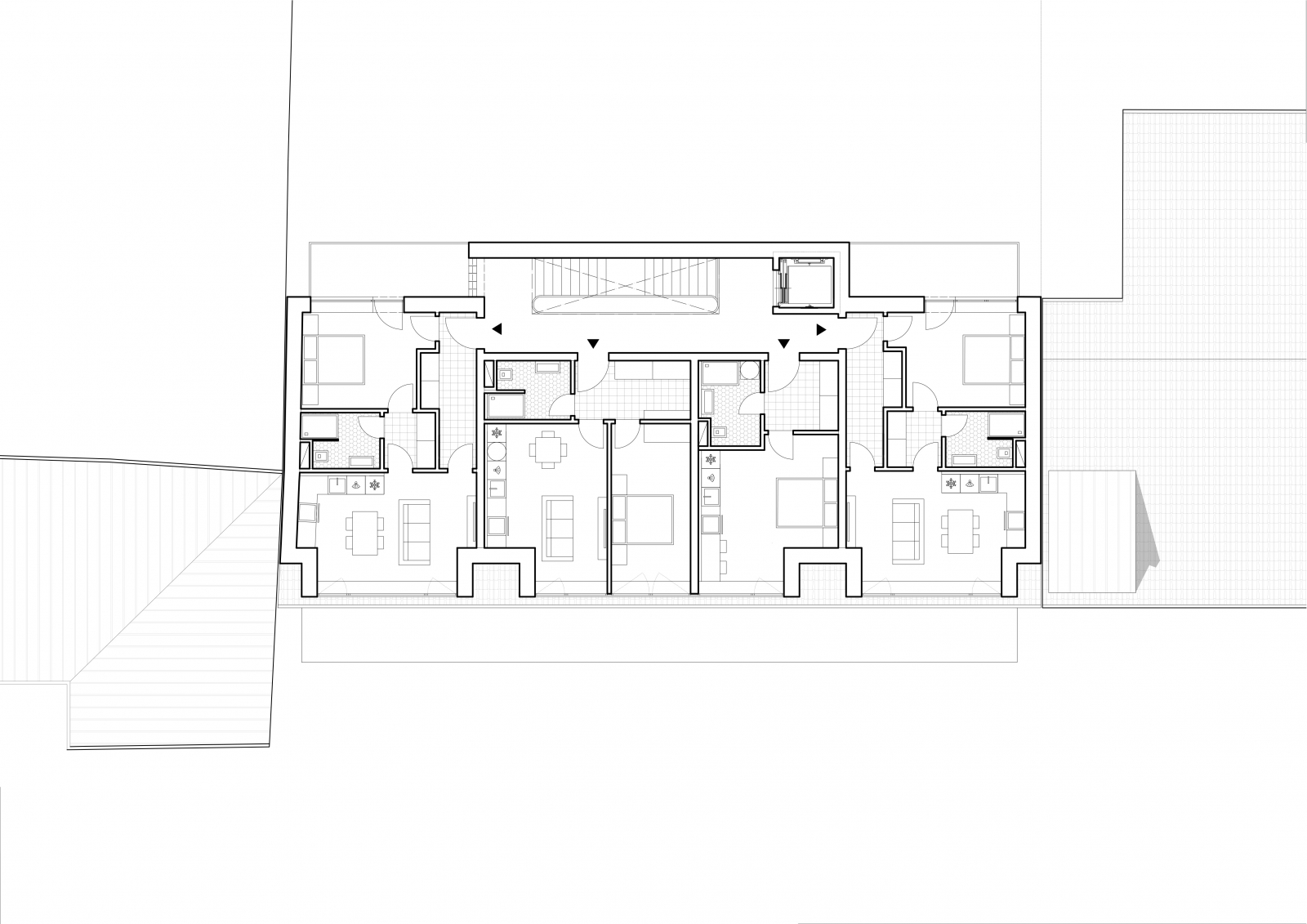 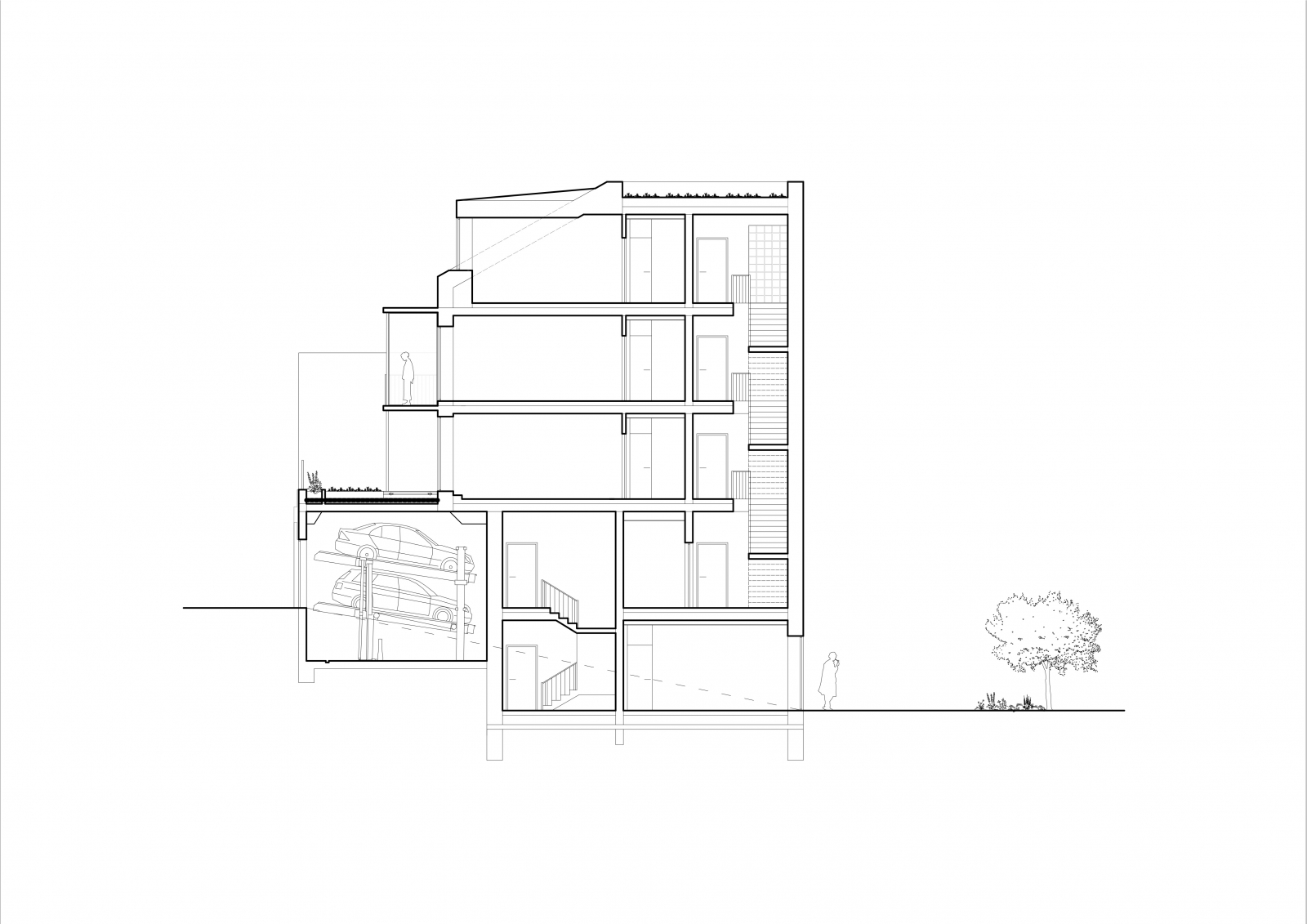 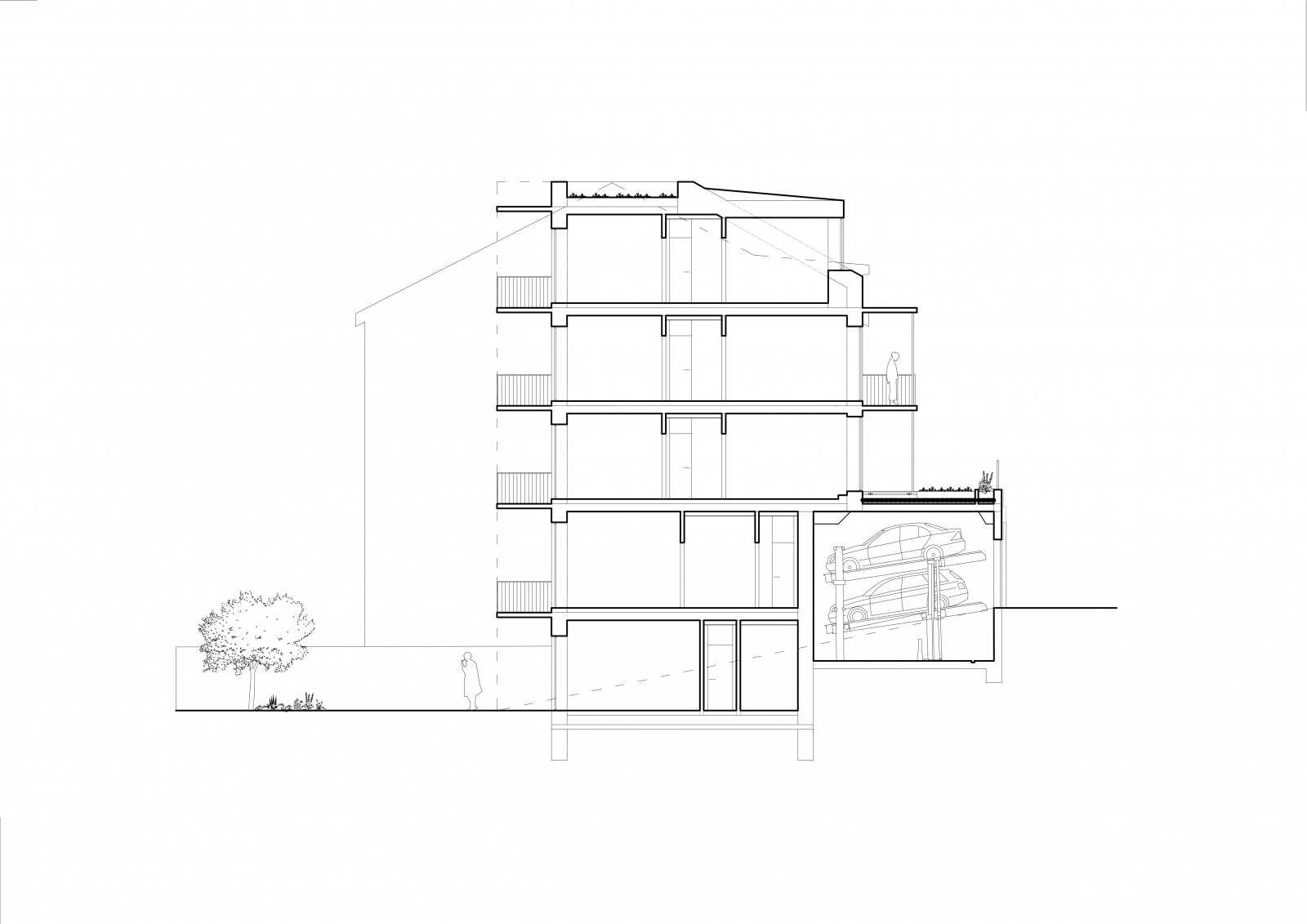 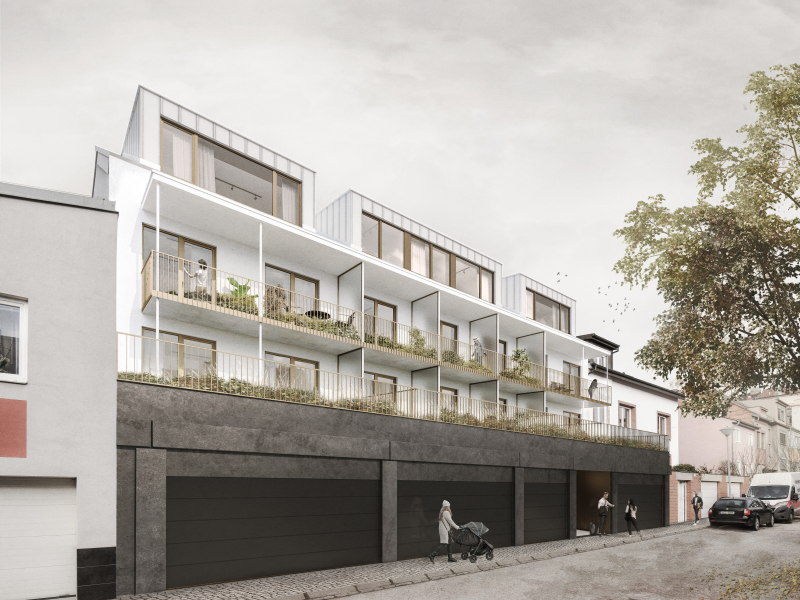 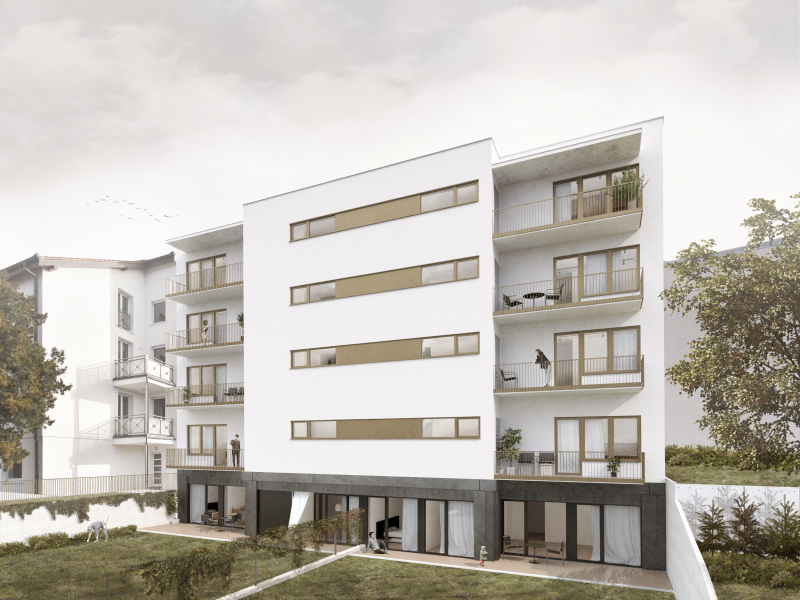 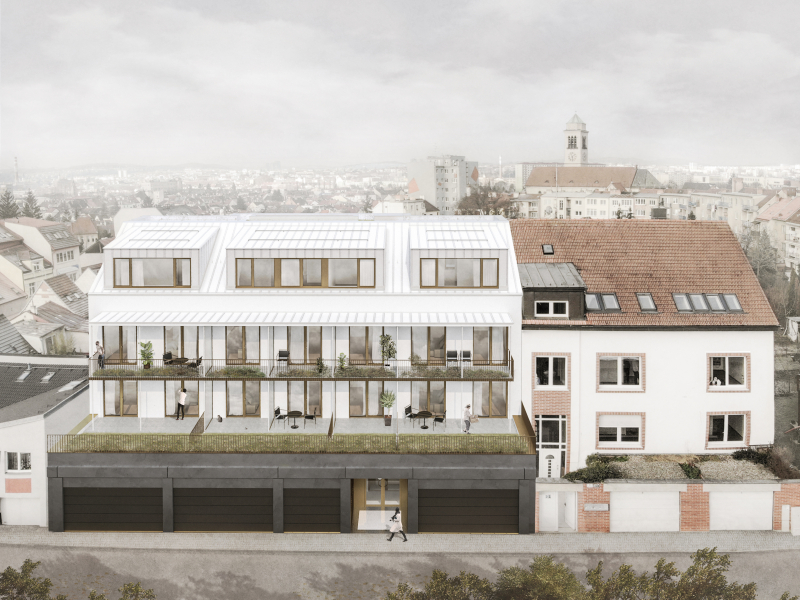 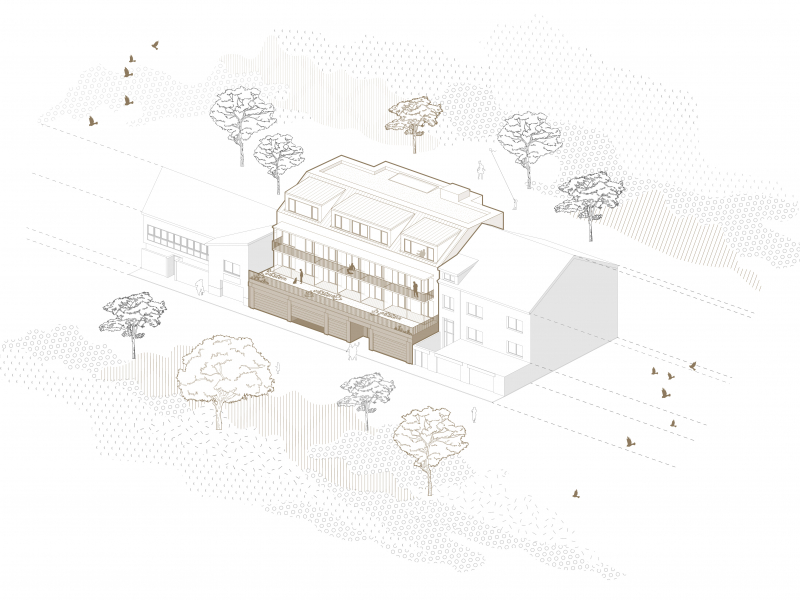 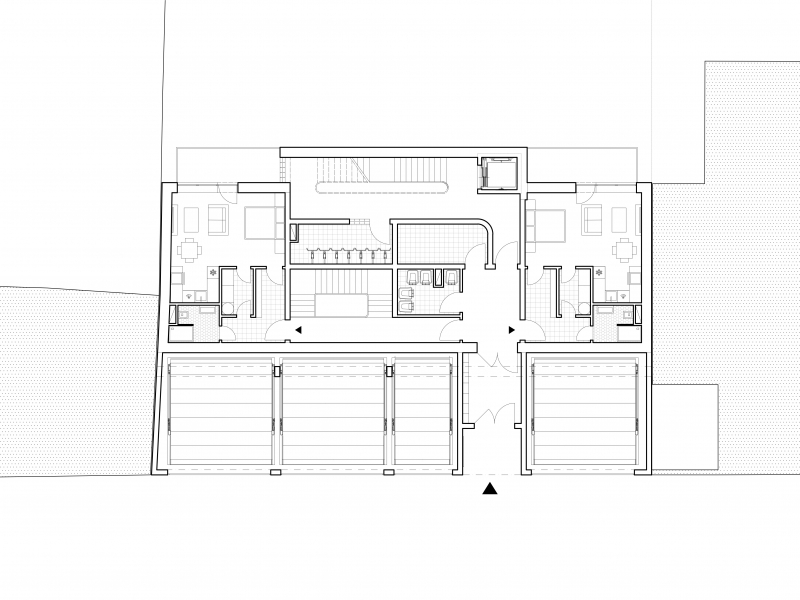 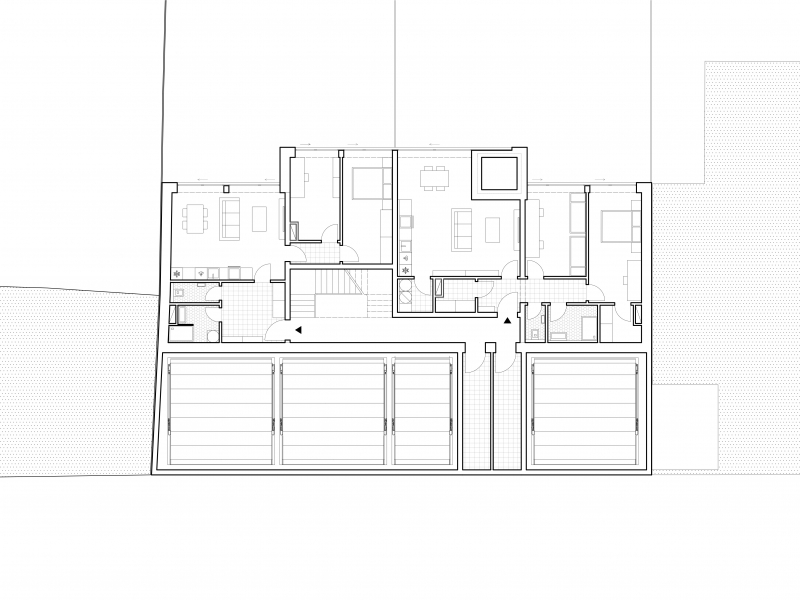 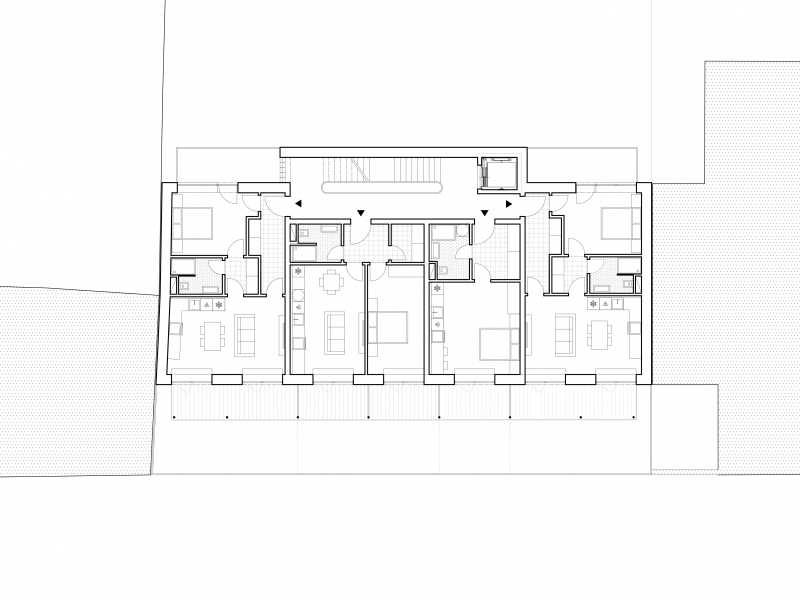 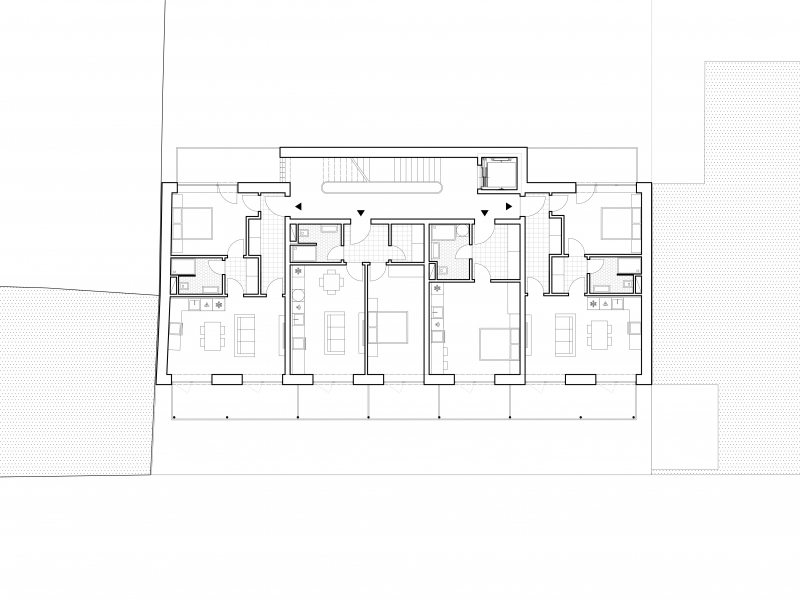 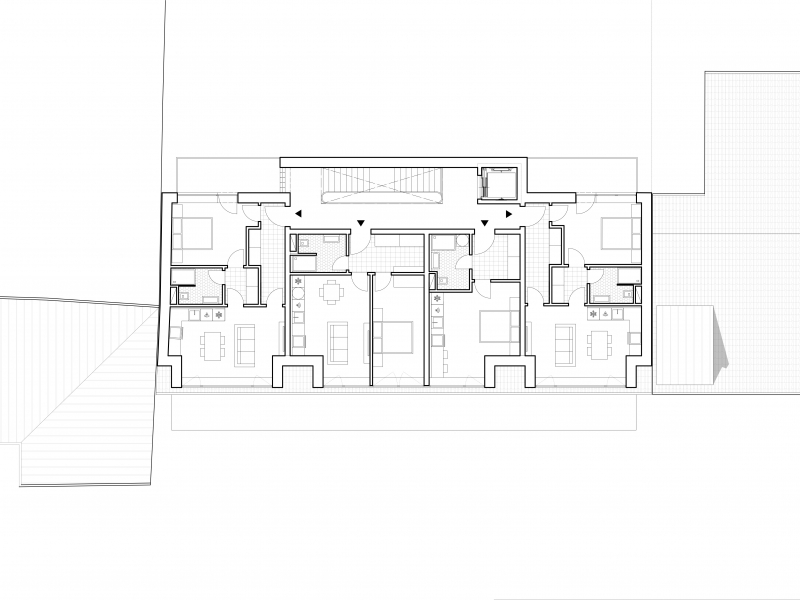 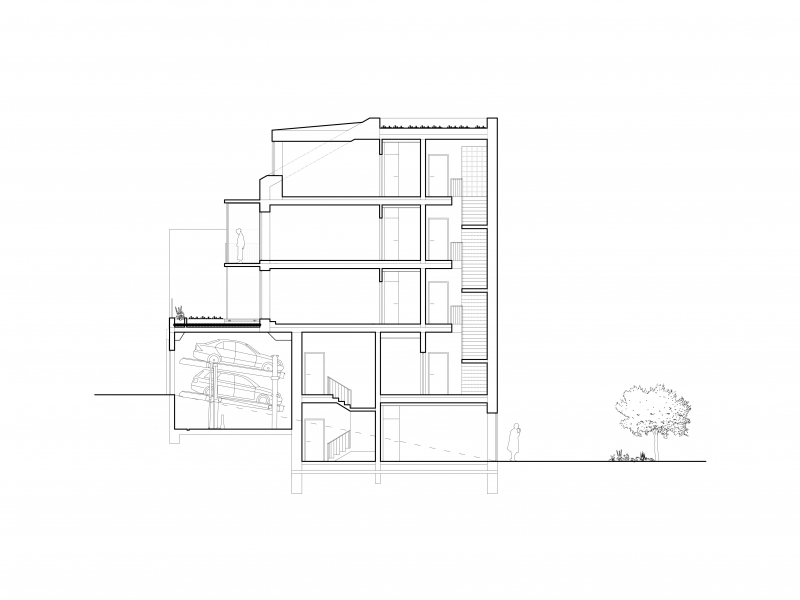 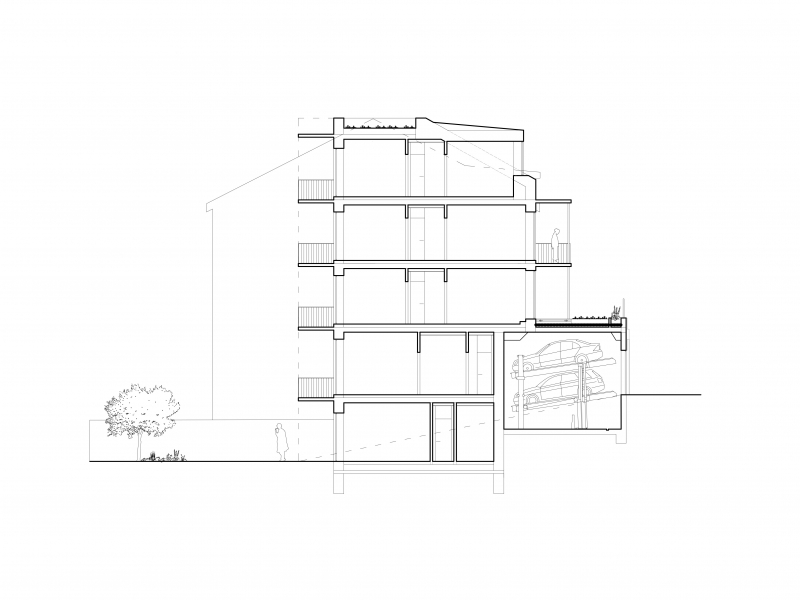