We have designed 14 modular family houses in Sloup for a new area consisting of the development of family houses, which is based on a territorial study designed by the Brno urban center U.S.B. In a simple linear street, connected to the whole area, single-storey buildings are incorporated by a simple arrangement, based on the requirements of the study.

The basic idea was the maximum variability of floor plans, which can be placed in the studies of the determined outline of buildings on land. The single-storey mass of a building with a flat roof tactically recedes and emerges from the basic volume, depending on the function and type of building. Variants of the house in the basic division include floor plans with dimensions of 130, 150 and 160 m2, while each of the floor plans contains at least 3 bedrooms and a garage with direct access to the building.

The recessed volume of the entrance to the building is formed by a leeward with a space covered by a roof. This volume recession, in addition to the practical point of view, divides the long front facade of the single-storey building into three units, including the entrance, garage and residential part of the facade. In the case of the largest floor plan, the entrance to the storage and technical rooms on the rear facade of the building is separated in the same way.

The layout of the floor plan is based on the modular arrangement of the object. All buildings have an entrance to the garage on the front facade directly connected to the house itself. Upon entering the building, the visitor finds himself in a separate cloakroom, from which he then enters the hall from which there is access to the living room, one bedroom, bathrooms and utility rooms. The basic idea of the interior design was to unify the kitchen, access to the bedrooms and the living room, and thus create a space used and shared by all. This was possible thanks to the free-standing kitchen area, which with its back side also forms the access corridor to the rooms. There are small interior differences between the individual dimensional variants of the houses, but the most significant is the reversal of the principle of bedrooms and the living room.

The houses are, as an expression of durability, lined with a light brick strip, which is contrasted with anthracite details and plating. The parapet of the house ends with the facade cladding with two turned rows of strips. The sunlight is brought in by a single type of French windows, which are placed in the module and allow convenient access to the gardens from any room in the house. The interior material solution depends on individual designs for new homeowners. Paved surfaces made of paving blocks also contribute to the overall atmosphere of durable materials. 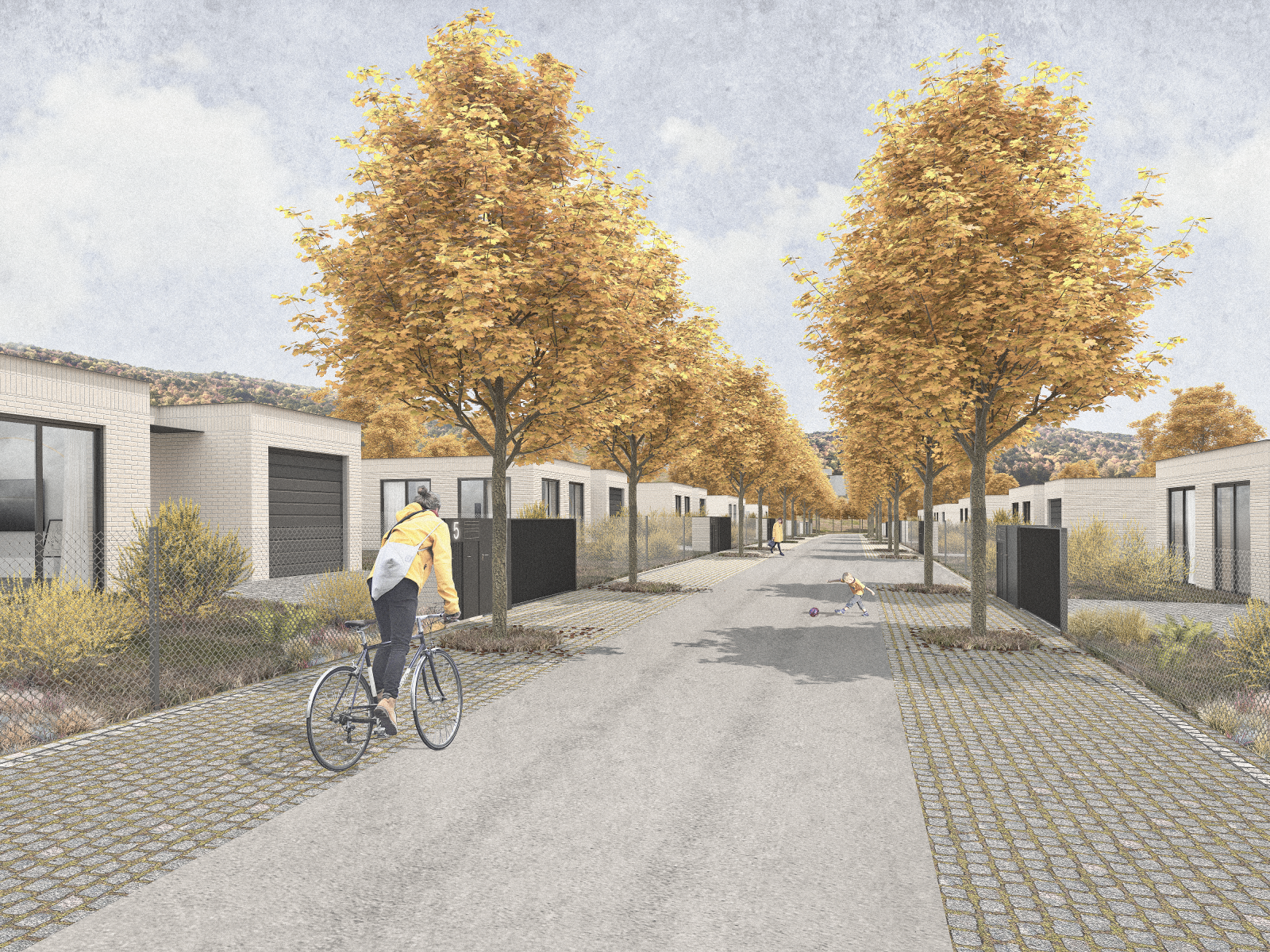 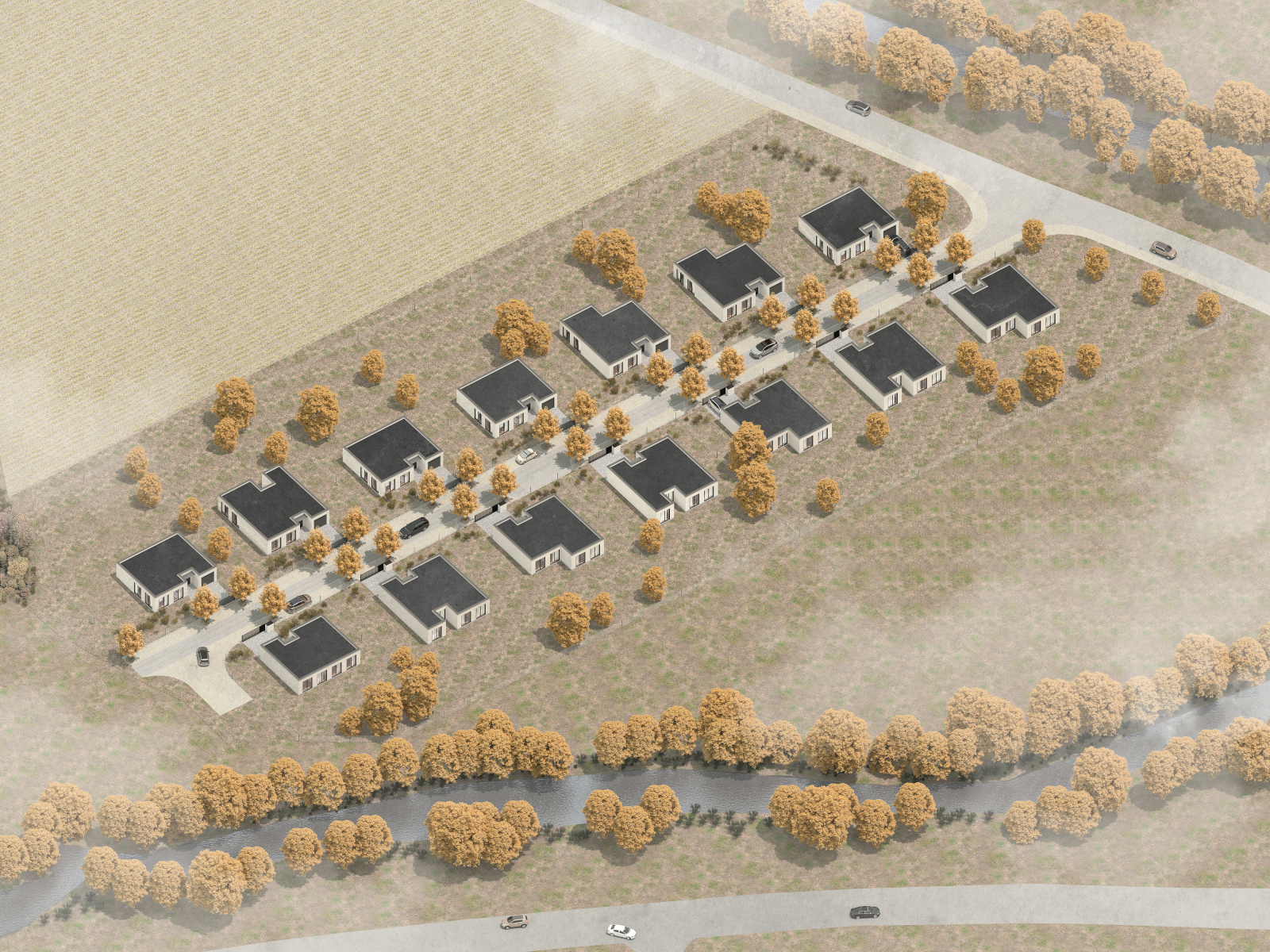 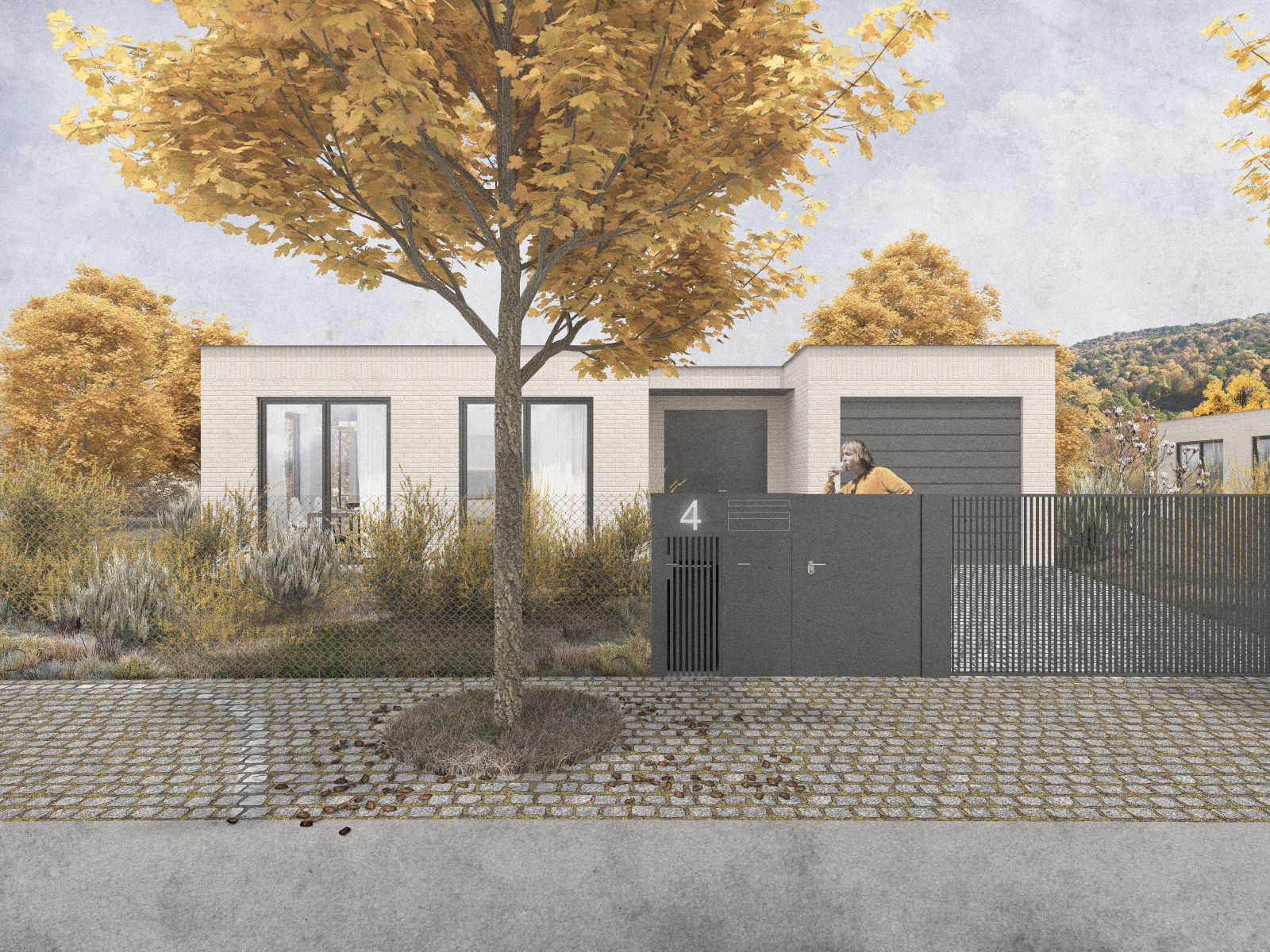 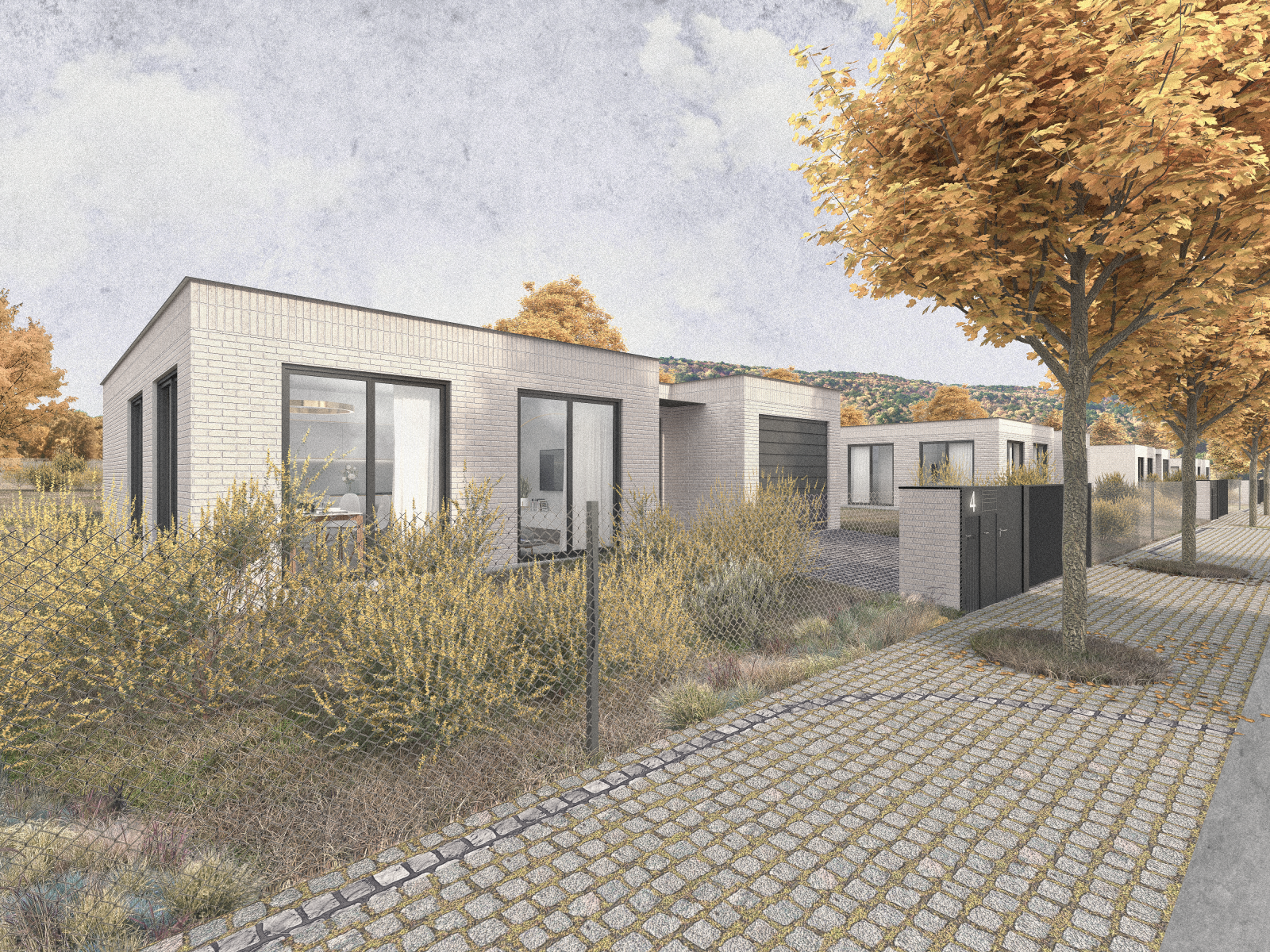 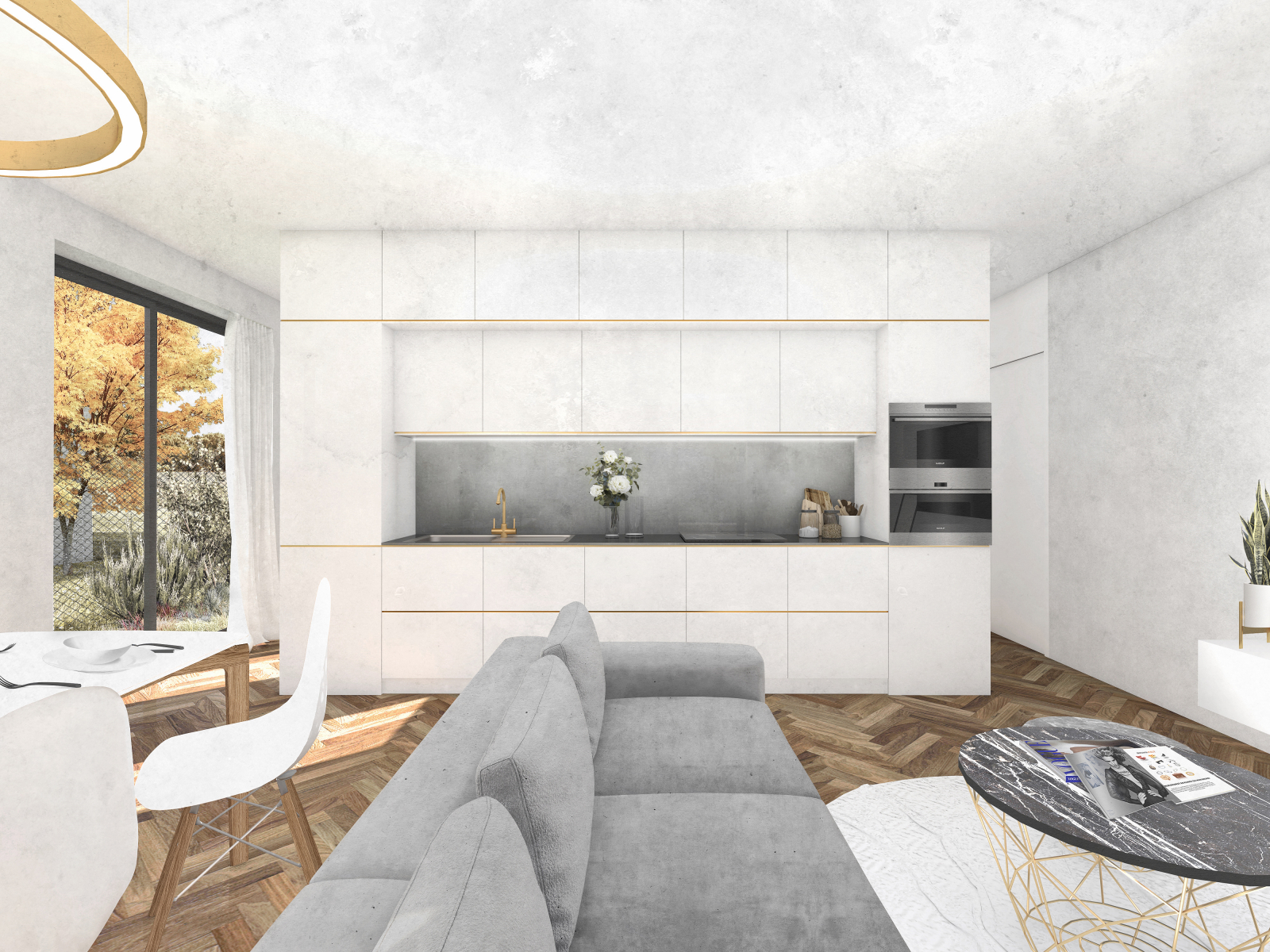 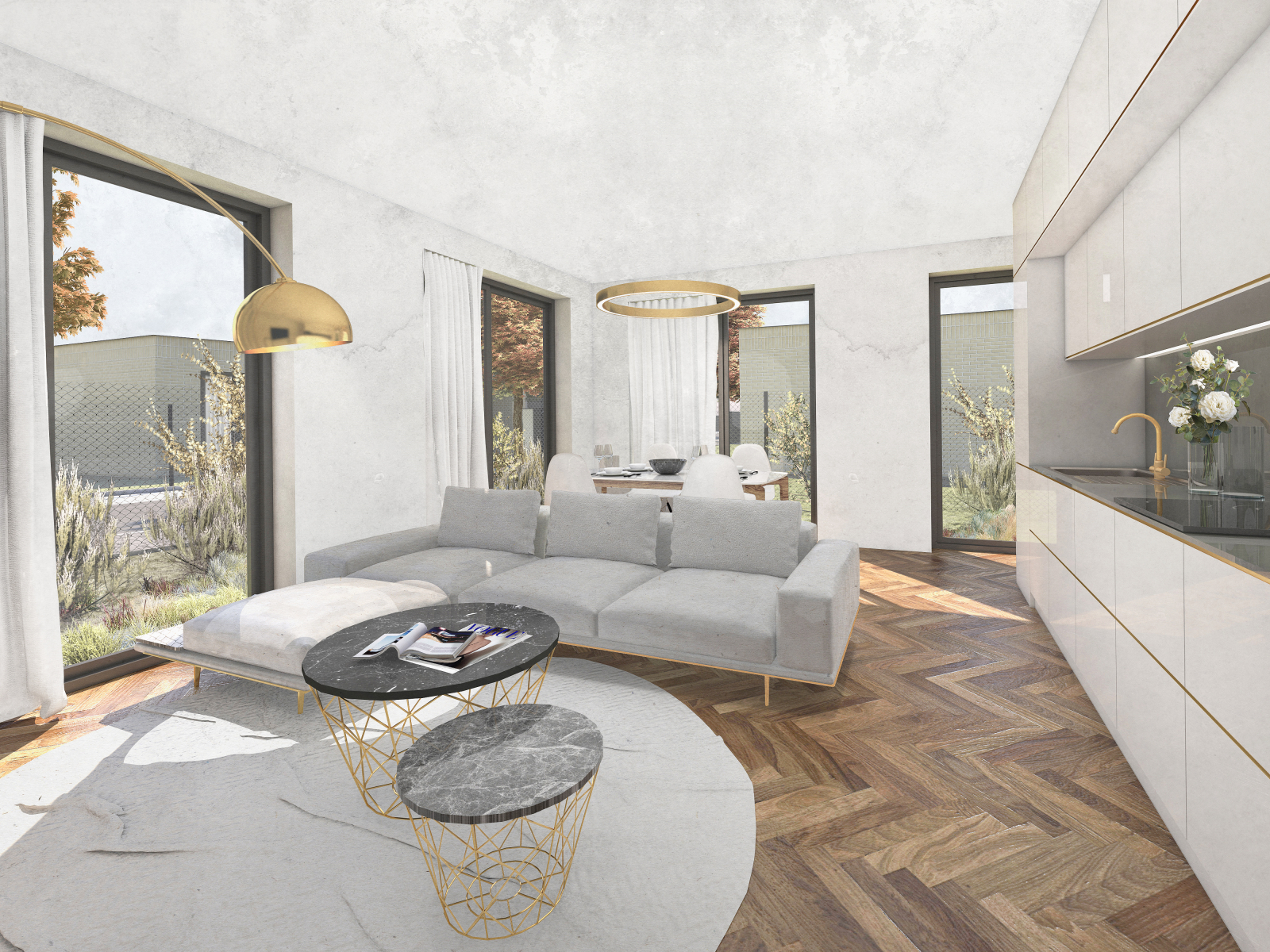 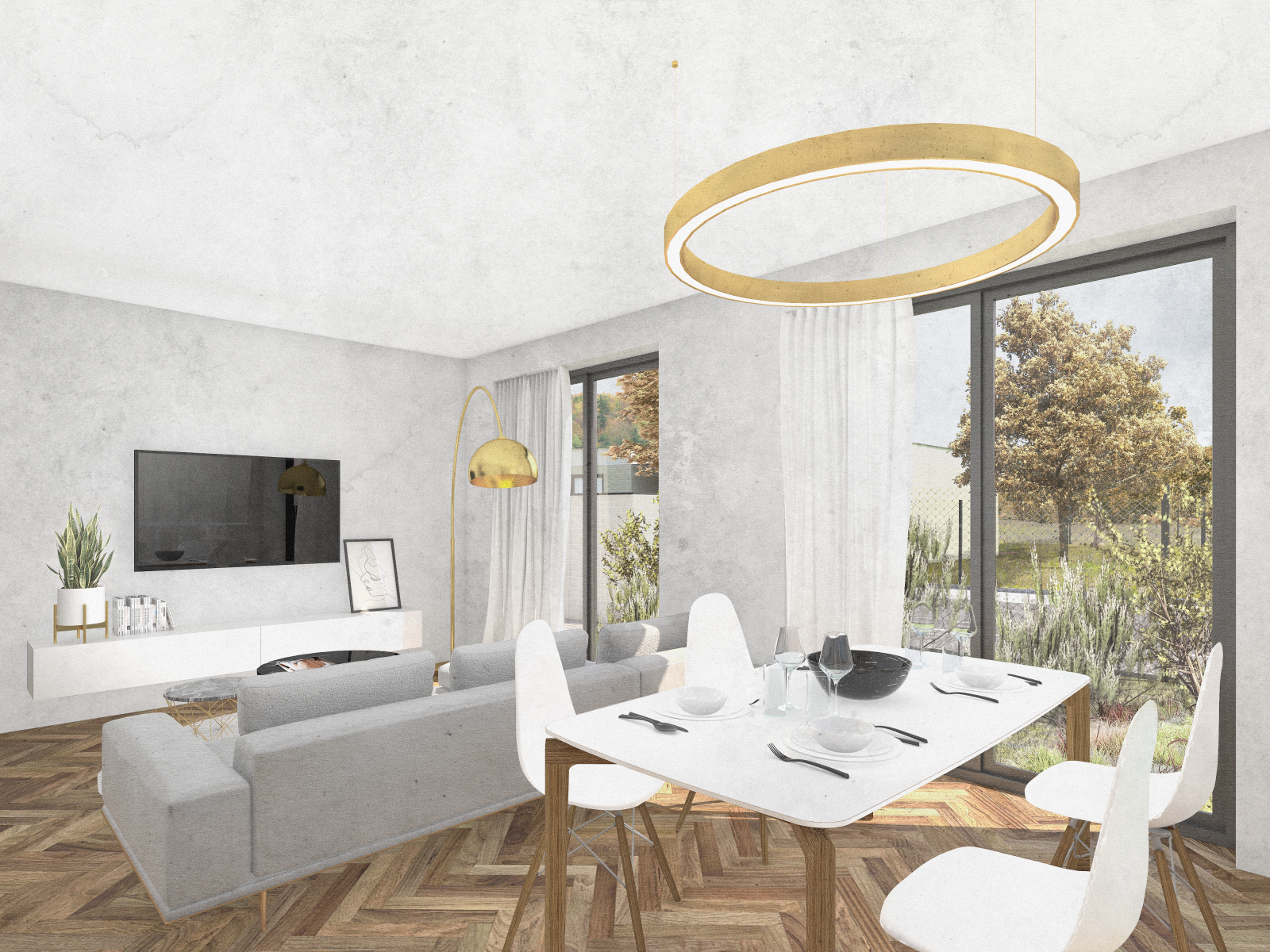 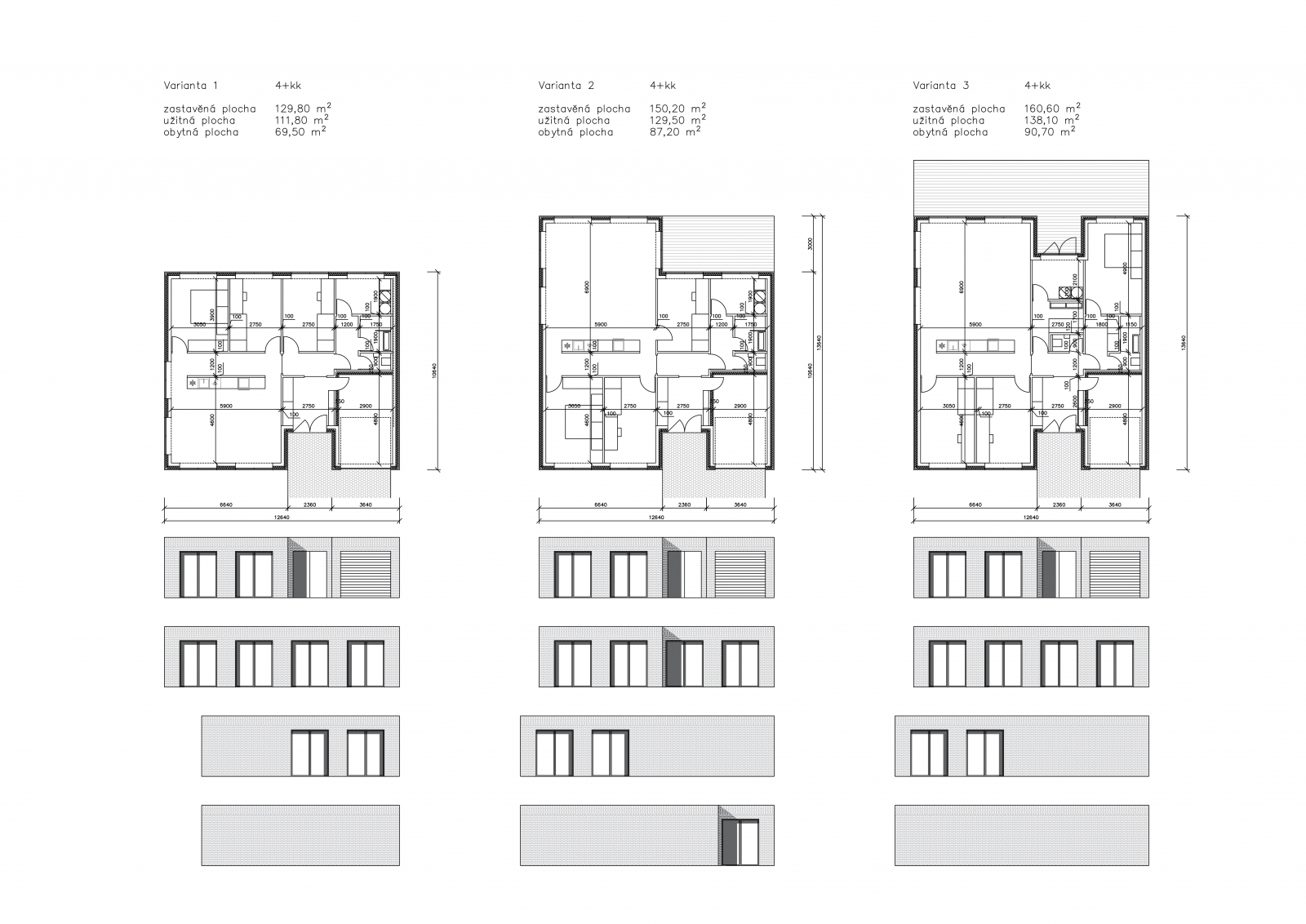 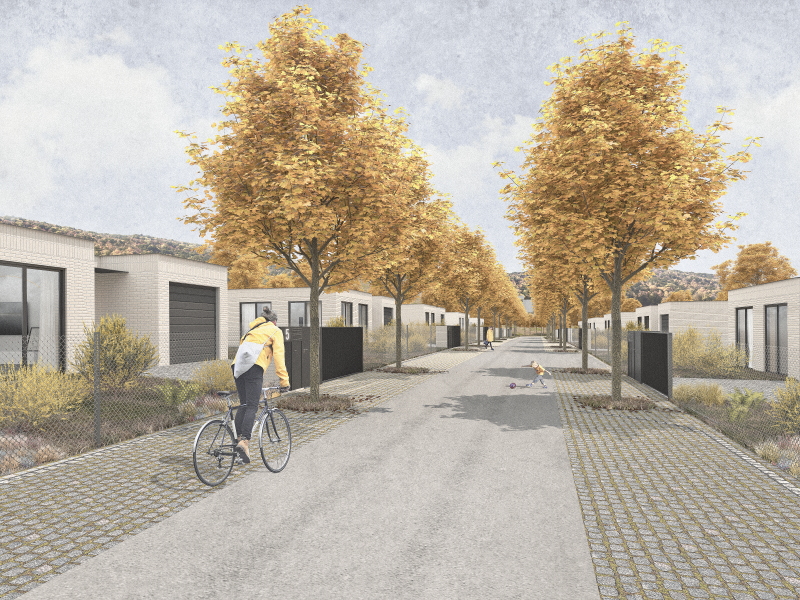 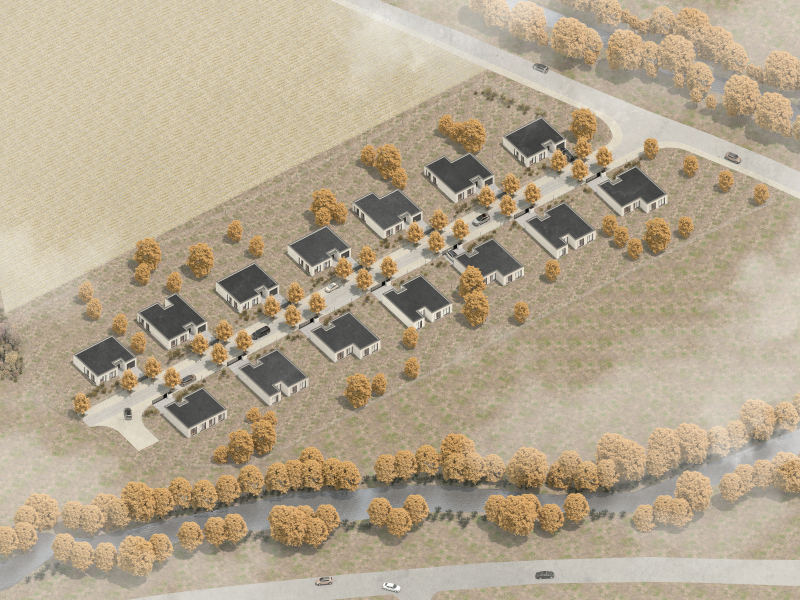 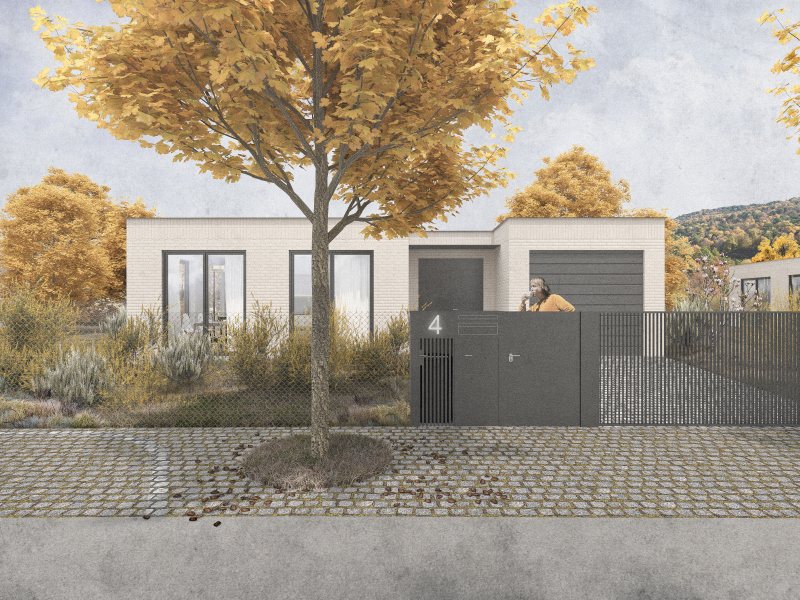 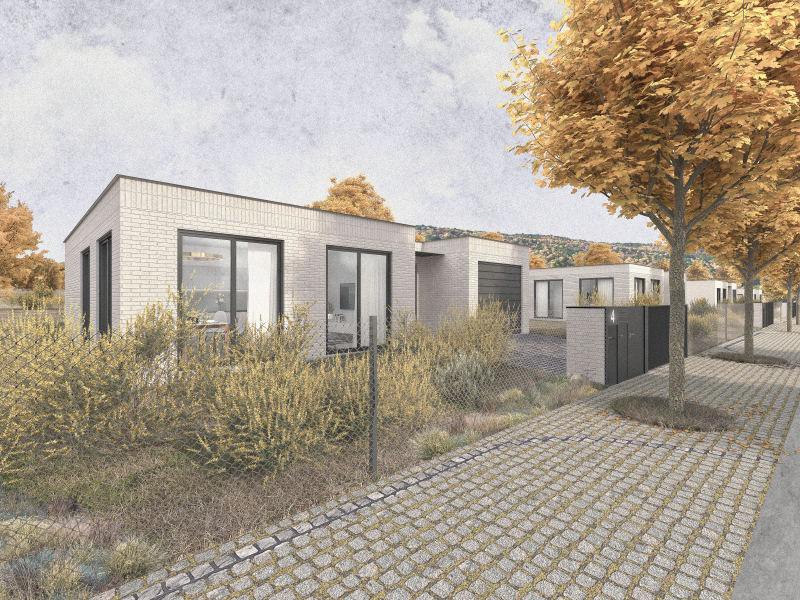 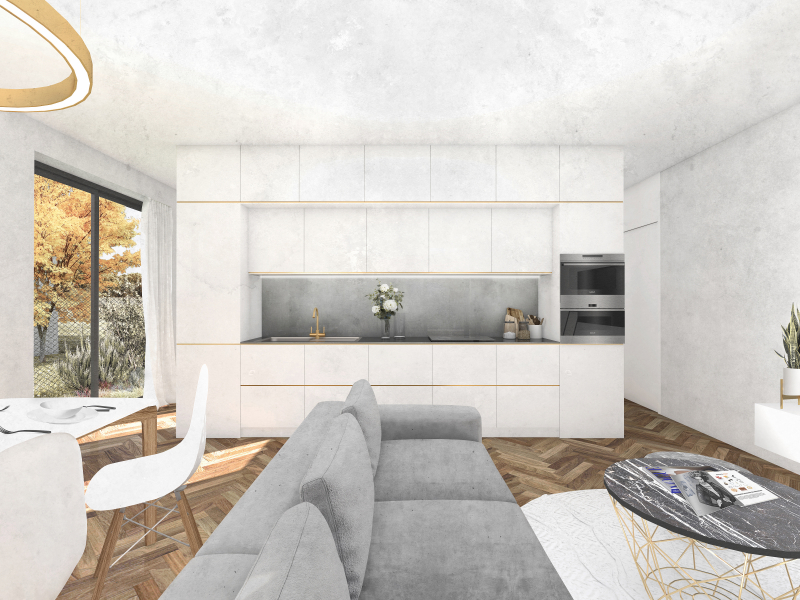 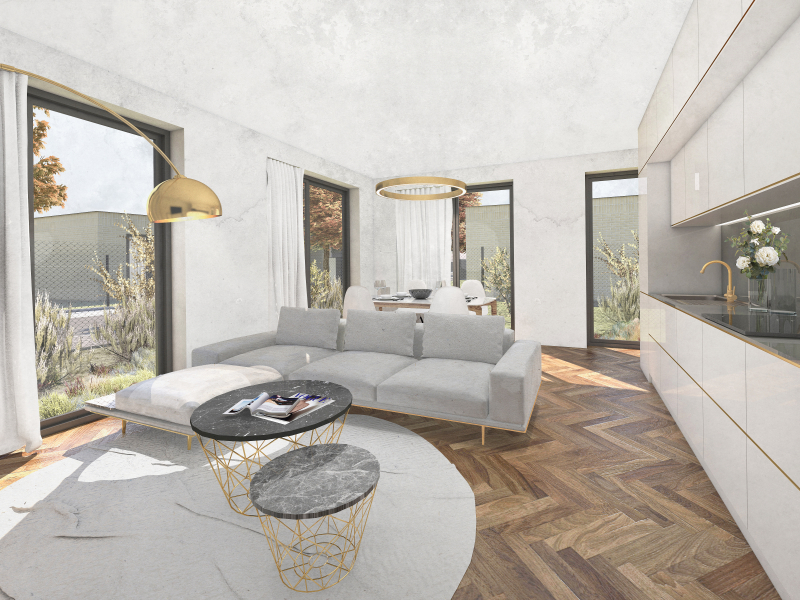 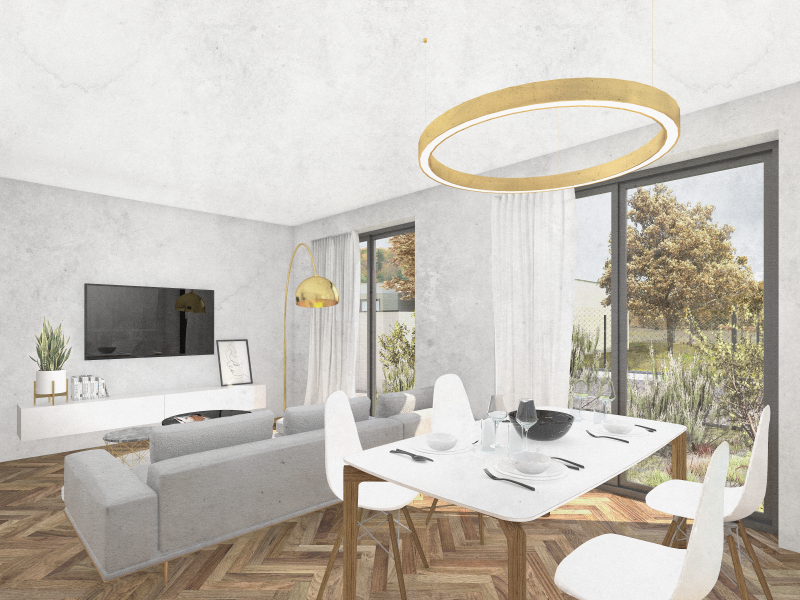 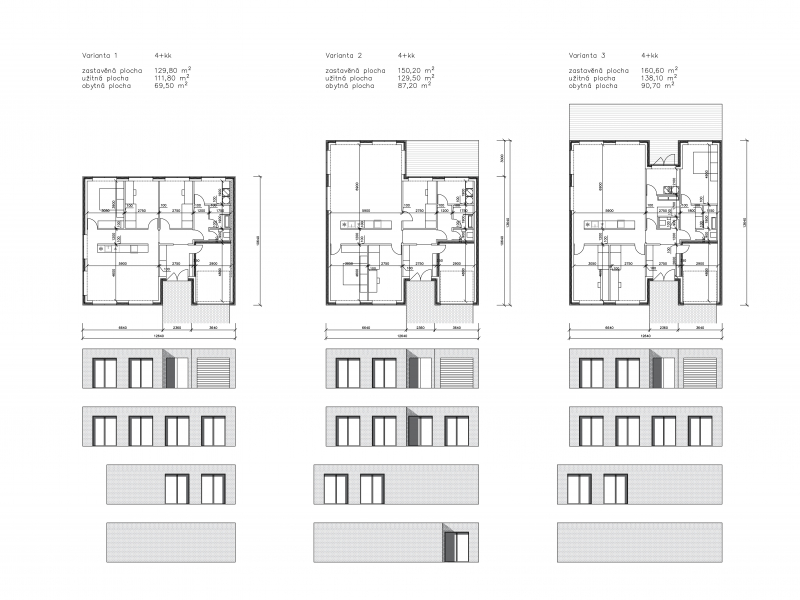