The purpose of the single-storey extension of an office building is a training centre for a company dealing with tracing technology. The centre is to offer a large meeting and training room, laboratories and projection rooms. Materially, the building follows the complex geometry of the existing building and encloses the garden in a courtyard, the last open side of which is bordered by a high wall of the original greenery. The mass of the extension is completed by a tower, which protrudes from the used module and together with the elevated attic and intensive vegetation roof, forms a reaction to the avant-corps of the existing building. The connection to the original building itself takes place in a single-storey part of a similar width of the wing, which has achieved a natural connection of volumes. The mass that closes the courtyard bends at the joint. It was into this bend and collision of axes that a supporting column was placed, symbolically demarcating a new part of the building.

The floor plan is based on the classic modular layout of office buildings. There is a kitchen in this system, behind which there is a relaxation zone in the connection of geometries in a triangular floor plan, with a separate entrance to the new building. In this connection there is an entrance and a glass wall to the meeting room, an entrance to the kitchen, a corridor to the original building and an entrance to the newly built sanitary facilities, which are reconstructed in the premises of the existing building. From this area there is also a corridor, serving all other rooms of the new wing. The corridor itself is built against two vertical glass openings, so all movement in the building takes place against natural light sources. An important element is also the modular alternation of skylights, which make a play with light in the corridor. The already mentioned meeting and training room is also complemented by these skylights, which illuminate the longitudinal meeting table. Other rooms correspond to the classic office sorting. In the middle of the building there is a large laboratory open room and in the final mass of the wing there are three largest independent offices.

The façade acknowledges the modular arrangement of the extension, and in connection with the original building, vertical aluminium windows in a natural shade are placed in the tectonic arrangement. The subtle façade, which covers only the thickness of the reinforced concrete slab system, is complemented by the overlay thickness of the green Italian onyx. The rest of the facade is treated with Keim sand plaster, which is to symbolize the stone on the subtle columns. Quality stone cladding does not only appear on facades, but also in interiors, for example in the form of an onyx wall in the rest area. The overall atmosphere of quality materials is supported by a uniform stone floor. 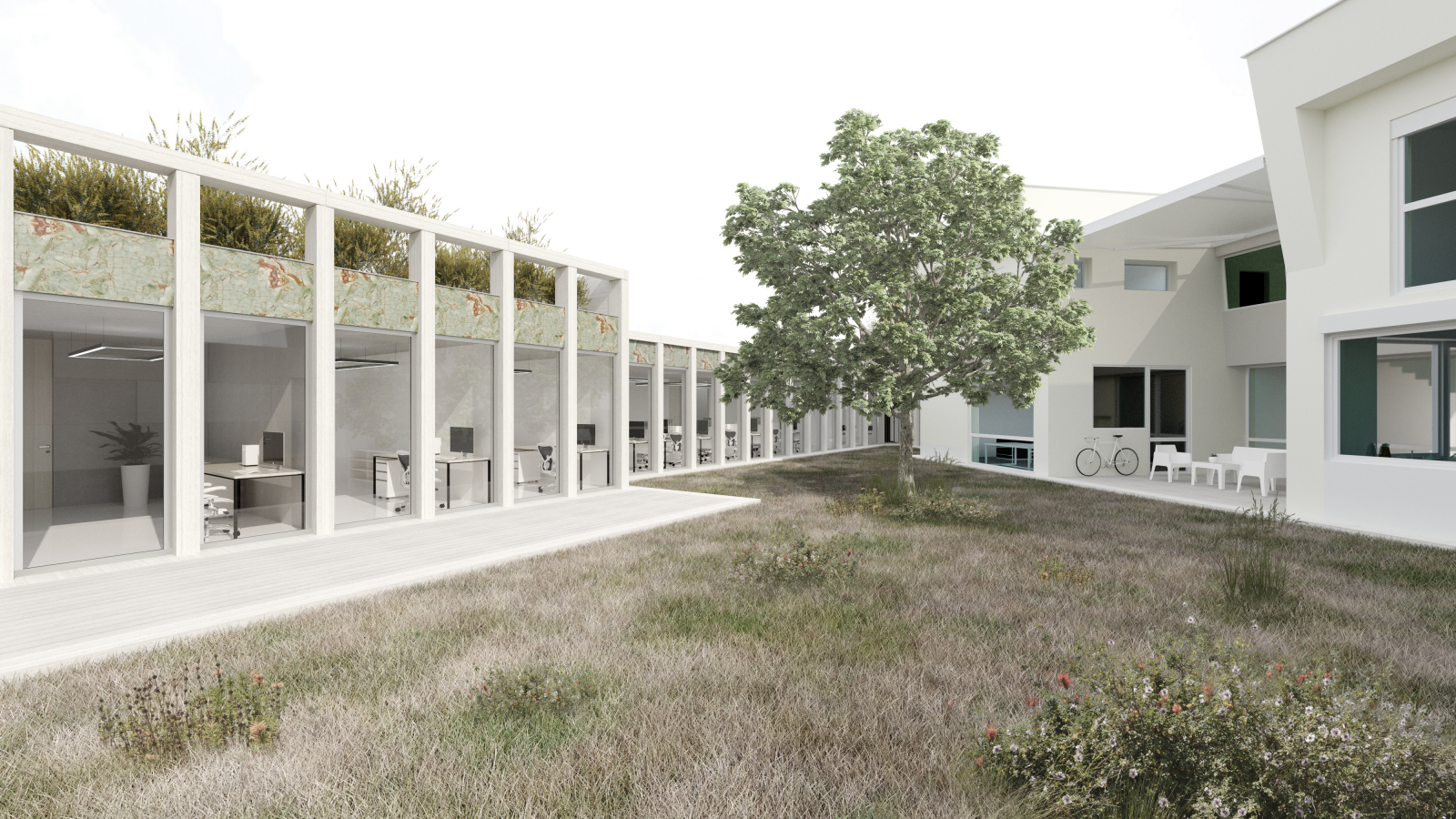 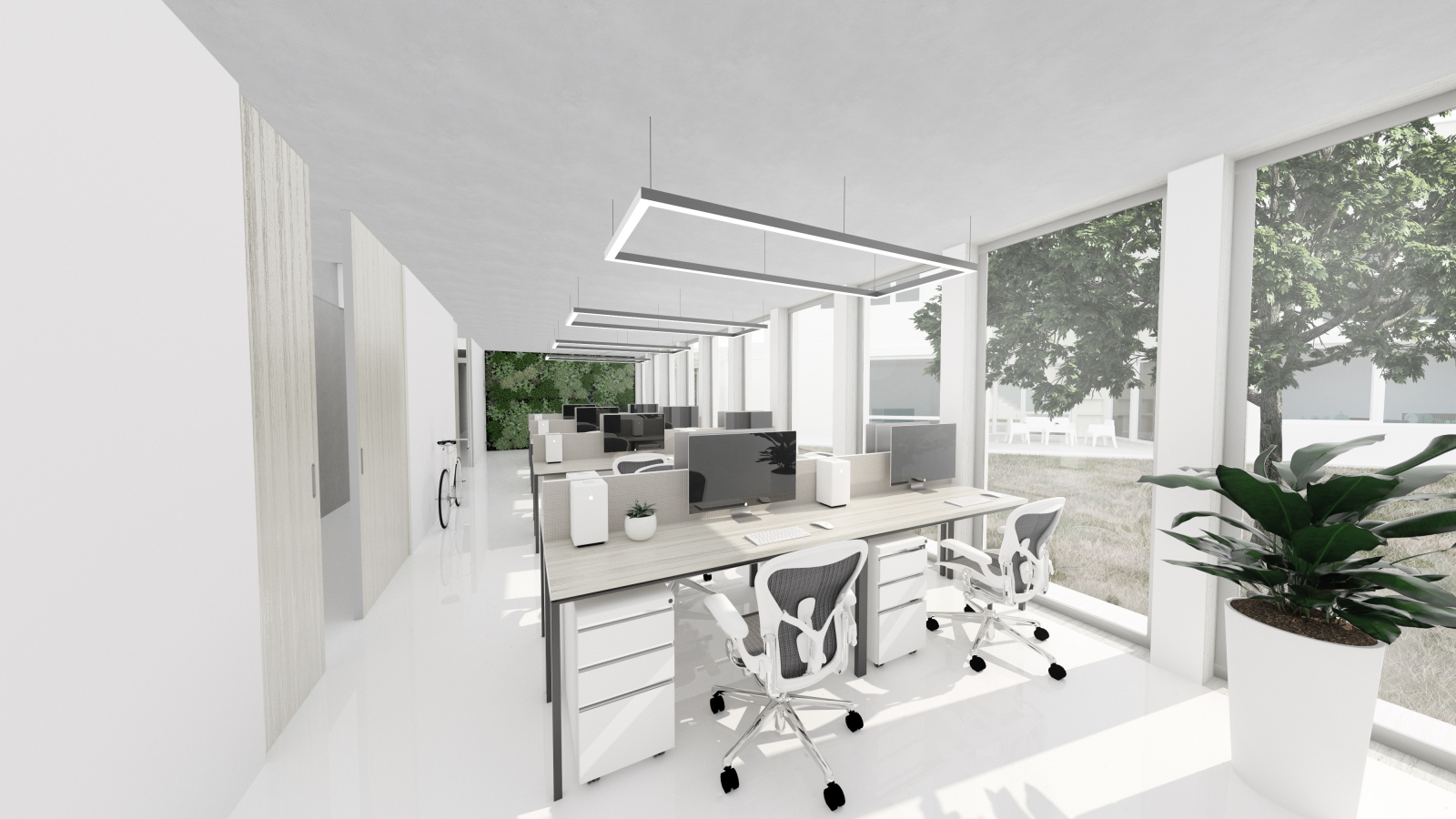 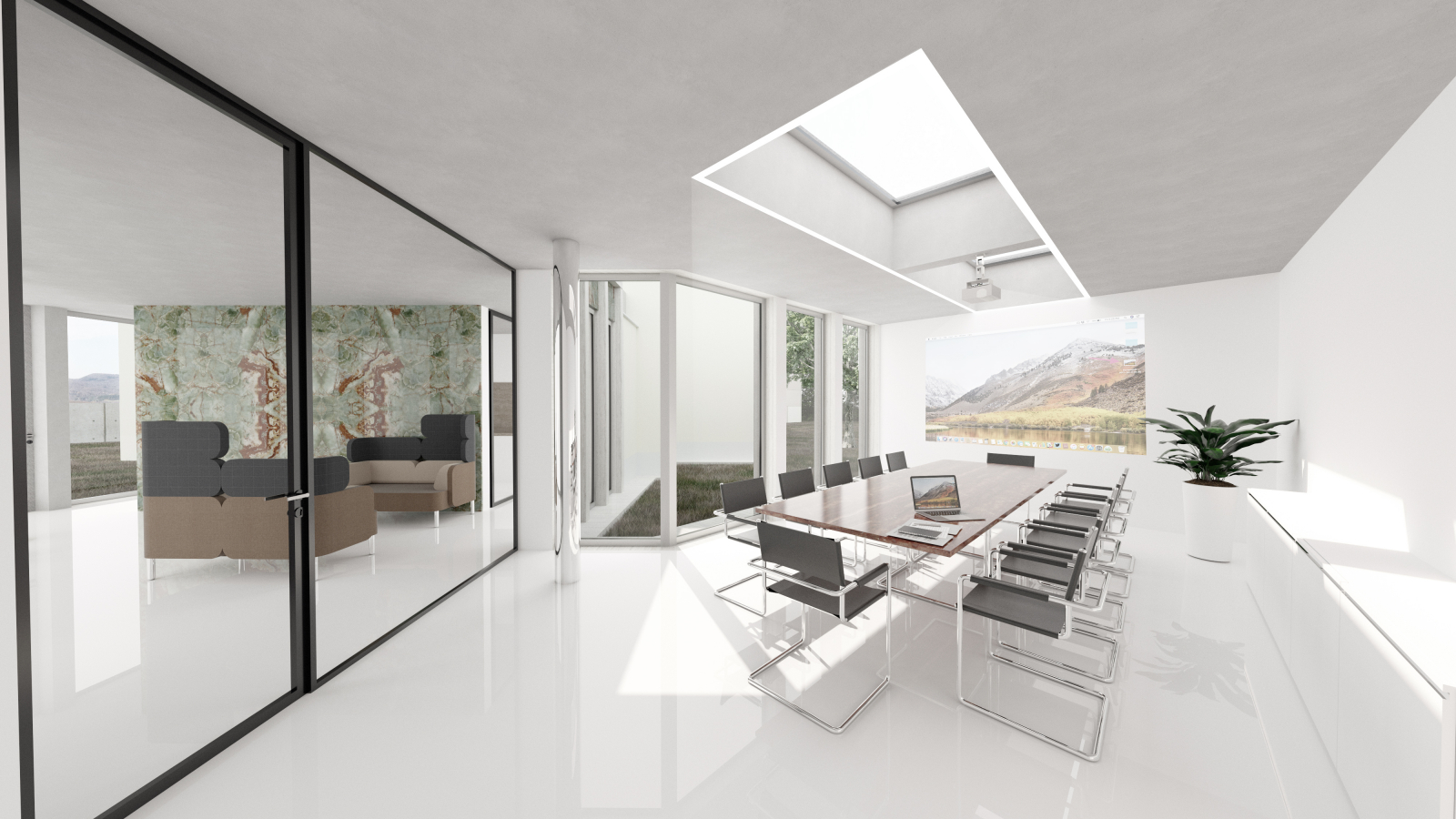 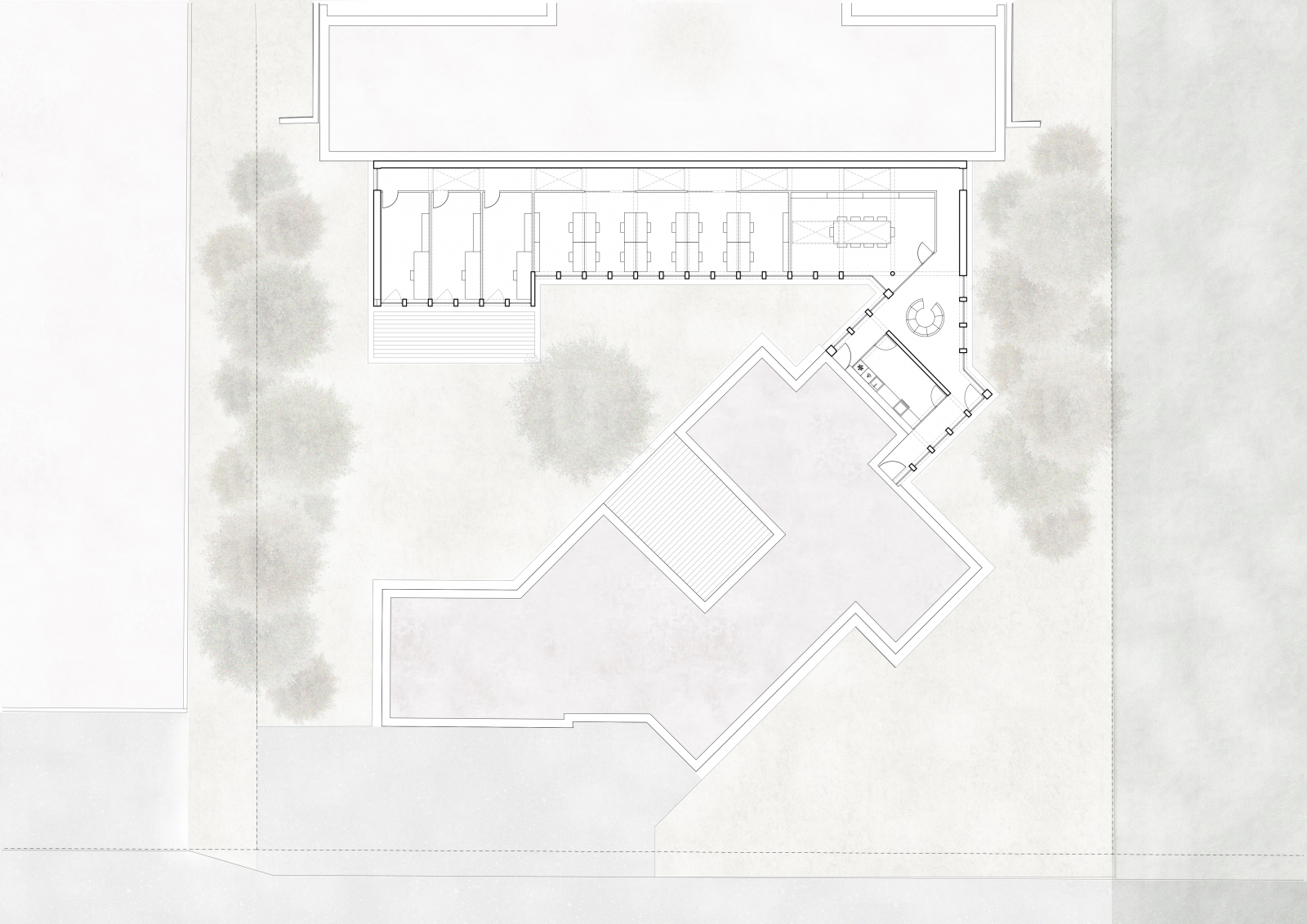 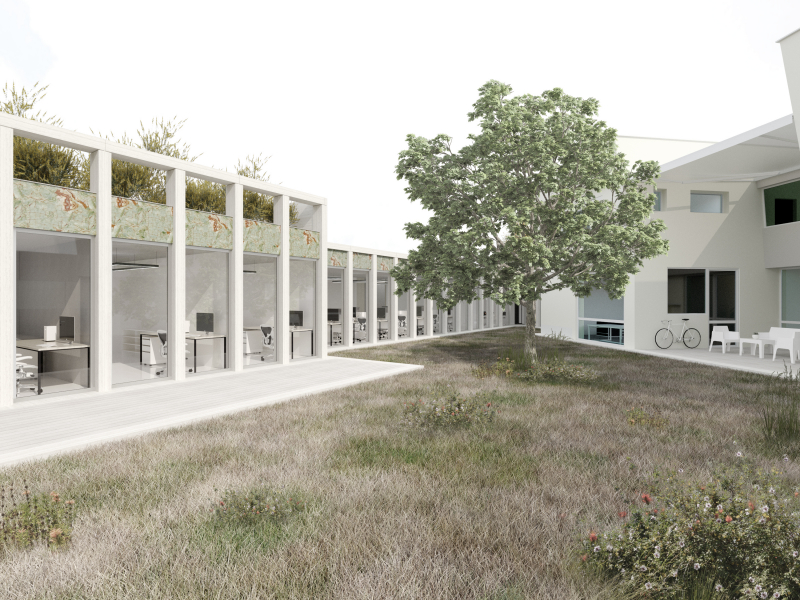 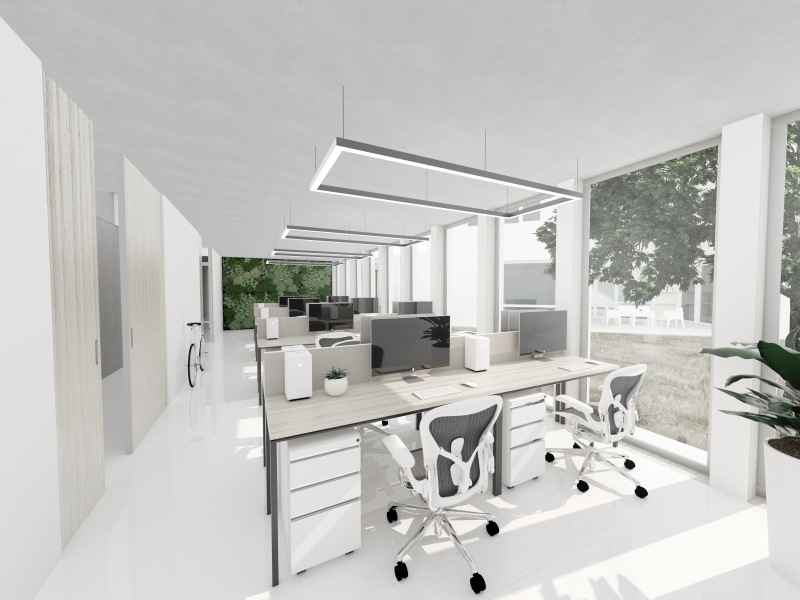 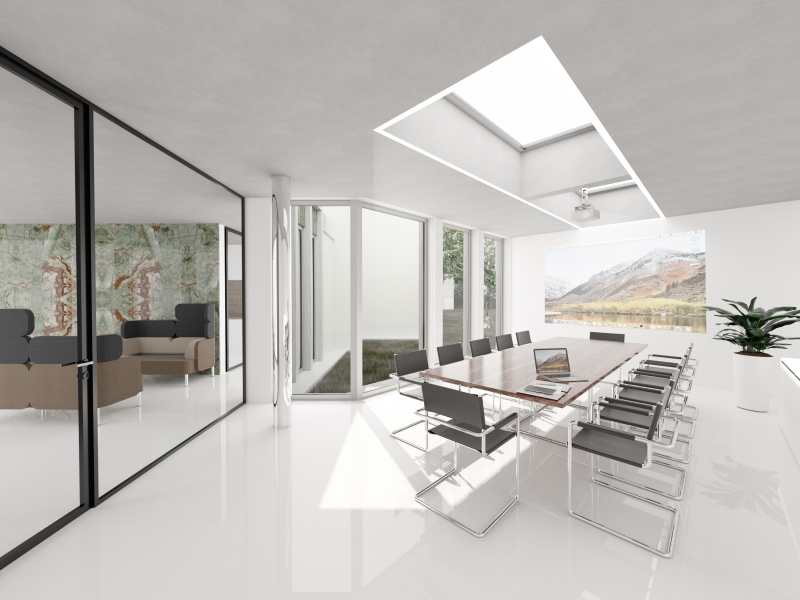 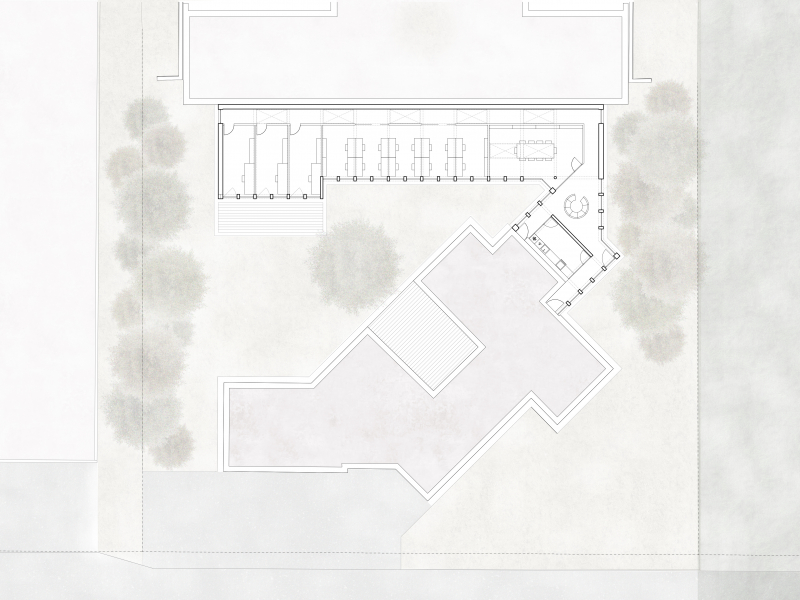